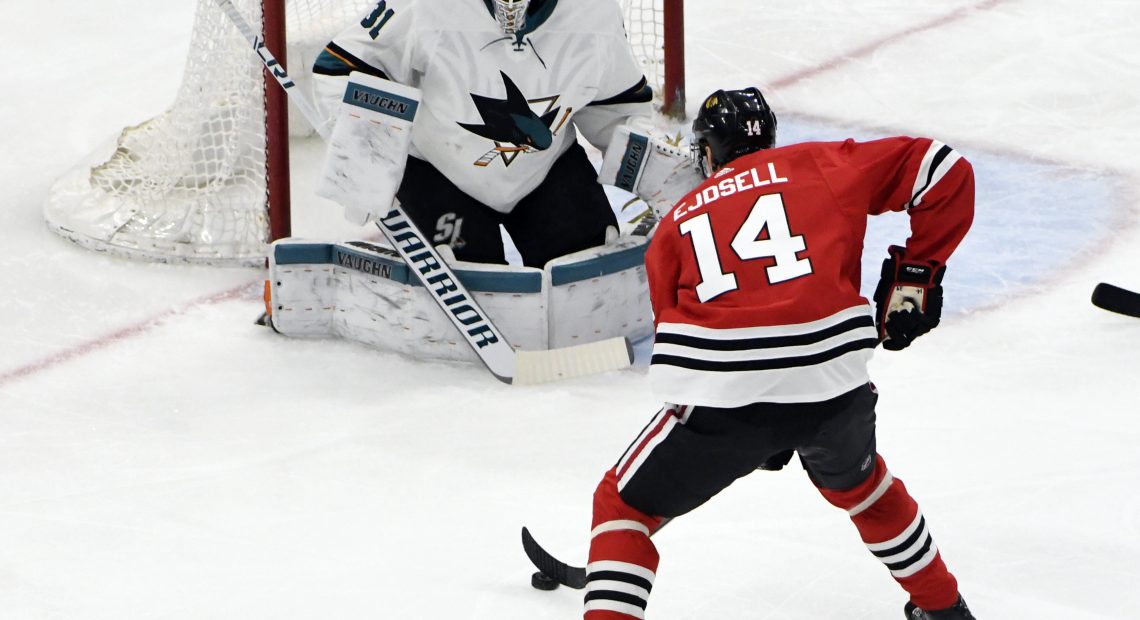 The outcome may not have gone the Hawks’s way, but that was the most exciting game I’ve watched since the first two. There’s more than enough to take away from this one, so let’s get to it.

– We’ll start with Victor Ejdsell. For a guy whose first game saw him on the top line between Saad and Kane against a team still fighting for home ice advantage, he looked utterly pristine. We were worried about his skating, but Ejdsell assuaged our fears with a long albeit syrupy stride. He had a quick one-on-one with Jones early in the first that he got nervous on, forgoing a wrister to try to get closer and finish with a weak backhand. But outside of that hiccup, his first period was close to flawless.

He finished the first with a stunning 61+ CF% (26.05 CF% Rel) and a couple of good passes and set ups. He ended the game with a strong 51+ CF (12.59 CF% Rel) and didn’t have any huge diaper shittings. It’s only one game, but Ejdsell impressed me, especially with his passing. The only time I saw him plop in front of the net was during the first period PP, but otherwise, he maneuvered around in the high slot most of the time, looking to make plays. He’s someone to watch over the next five games, as he has the look of something useful.

– Speaking of useful, wouldn’t it be useful if fourth liner Alex DeBrincat would forgo his gritty bodychecking ways and just commit to scoring? The fact that he’s on the fourth line is a continuous personal affront, but hey, he set up the game tying goal there. I sometimes worry that Q putting him on the third and fourth lines will sour DeBrincat down the line, but I’m probably just projecting. Top Cat was outstanding with his passing and positioning as usual, but perhaps most impressive was a sequence late in the third.

After losing his stick, DeBrincat was bothersome until he read the puck as just unplayable enough in his own zone. He streaked to the bench, got a new stick, started a rush up the ice, and nearly scored on the play. And he’s only 20. Once he eats a few more sandwiches with Dylan Sikura, he’s going to be a force.

– I’m always going to be a curmudgeon about people who say that the Hawks miss Hjalmarsson and that Connor Murphy just isn’t up to snuff. Tonight was strictly a peep show for me, as Murphy was outright ruthless in all aspects of play. His CF% was a robust 52+ (15.12 CF% Rel), he scored a goal with a UNITY slapper, and he was far and away the most positively noticeable Hawks D-man on the ice. Don’t let Pat “Let Me Sound Out My O-Face Over Hits Unless Connor Murphy Does It” Foley fool you: Hertl’s goal ought to be laid at the feet of Gustafsson—who both misread the pass out of his oZ then couldn’t read Murphy covering for him—and Forsberg, who was wedgied by Hertl all alone.

And Murphy found himself playing with Gustafsson most of the game, which makes sense to me. Gustafsson—despite all the shit we give him—DOES have offensive instincts, and with Murphy’s burgeoning confidence, I can see this pairing working in the long term, provided Gustafsson makes at least some effort at defensive responsibility. It’s not perfect, but it makes sense on paper. And hey, Gustafsson led the team with a 57+ CF% tonight against a team rate of 43+, so you’ll take it.

– Aside from the Hertl goal, Forsberg looked decent. As always, he looked behind himself more often than a professional goalie should, but I’m always going to have a hard time being mad at him. The first goal was the result of Rutta playing “don’t touch the lava” in the blue paint, trying to cheat toward the far side of the net to cut off Hansen, who was covered pretty well by Oesterle, leaving Sorensen a gaping goal mouth on the near side. The second was off a faceoff win by the Hawks in the oZ, which then saw Seabrook turn the win over to Boedker, who passed to Shitty Kane #2, who then made Seabrook look like John Daly stumbling down a bunker to look for either his ball or a cigarette butt with a pull left on it, whichever requires less effort.

– Ragging on Seabrook these days is like shouting at the wind, but holy shit did he look like a bag of chewed cuticles tonight. He finished with a 28+ CF% at 5v5, and that’s WITH Keith. Keith himself had a 27+ CF%. I get the temptation to put the band back together, but Seabrook sucks and Keith isn’t the “America Runs on Duncan” Keith that’s a surefire first-ballot Hall of Famer anymore. If you’ve ever lamented the fact that you’ll be long dead before the sun burns out, just watch these two play together. It’s the same fucking thing. These two simply cannot play together next year if the Hawks want anything to do with a playoff run.

– Brandon Saad seems to be in the throes of a relative Renaissance. Paired with Ejdsell and Kane, he was aggressive and his passing was crisp. He fed Ejdsell a couple of prime chances, and finished with a Hawks-forward-leading 55+ CF%.

– Vinnie’s confidence continues to grow as well. He finished with a 53+ CF% and put on a one-man show in the third period, juking and jiving through defenders for a clean shot that Jones managed to stop. Fels said it earlier this month: We might have a Top 6 forward on our hands here.

Yes, the Hawks lost, but the younger guys looked good doing it. If Ejdsell can keep up what he did tonight, I would love to see him anchoring the third or fourth line next year, depending on what Kampf and/or Sikura end up being. Call me romantic, but I think there’s hope yet for this team.

Beer du Jour: Boulder Beer – Shake Chocolate Porter.  One of the best porters I’ve had in a while.

Line of the Night: “The Blackhawks won the first period, no question. That should have been a 3, 4–1 period for the Blackhawks.” –Burish during the second intermission, despite the Hawks posting a 43+ CF% and a 2/7 high-danger Corsi For percentage (i.e., the Hawks had two high-danger shots to the Sharks’s five)