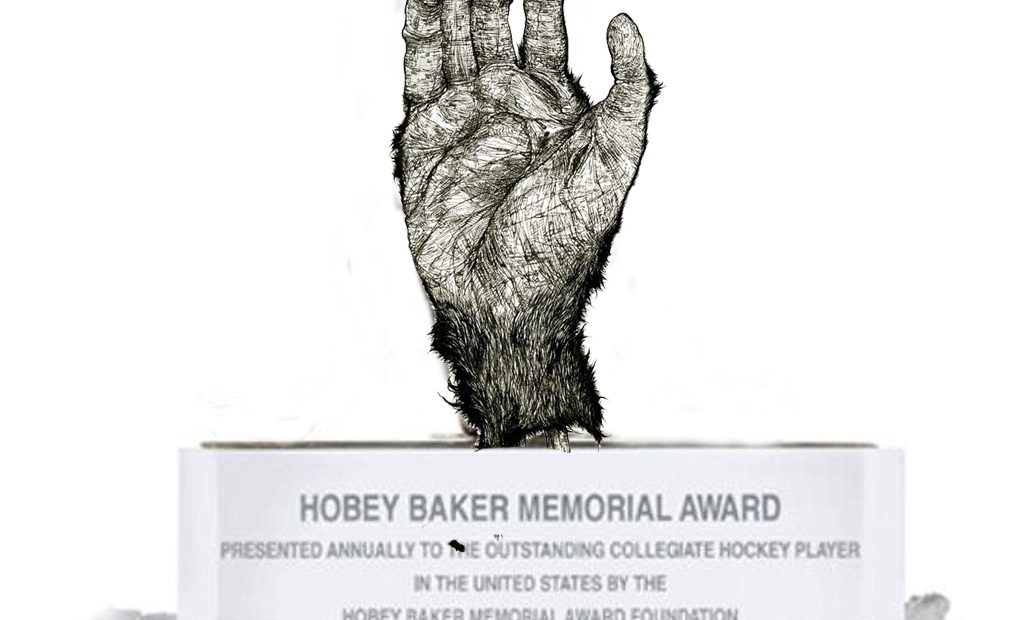 If every sport wishes to be more like the NFL, or at least come anywhere near the stratosphere of their profits, then the NHL got at least one thing right. The winner of its most prestigious, individual college award tends to go on to do dick in the NHL, much like the NFL.

Adam Gaudette won the Hobey Baker last year, NCAA hockey’s answer to the Heisman. Hawks will nod in the knowledge that Dylan Sikura‘s running buddy from Northeastern has looked useful, full of hustle, but can’t seem to score all that much. Gaudette has 12 points in 45 games, which is slightly behind the past of Sikura’s seven points in 25. Though Gaudette has actually found the net, so there’s that.

Hawks fans will remember former Hobey winner Drew LeBlahhhhhh’s thrashing attempts to play NHL hockey, and that’s generally been the trend of winners of the award. Of the past 10 winners, only Johnny Gaudreau and Jack Eichel have gone on to star in the league. And the key is that both won it as underclassmen. Eichel was a freshman and Gadreau a sophomore, and both quickly bounced to the pros. If you show up and immediately dominate the NCAA, you’re probably a thing. If you have to wait until you’re older than everyone, well…it’s kind of like punk rock, we guess.

Beyond that, Will Butcher and Jimmy Vesey have gone on to be at least contributors to an NHL team, if nothing resembling stars. Hell, if you go through the past 20 years, you’d only add Ryan Miller and Chris Drury to the list that Gaudreau and Eichel reside, and maybe Matt Carle to the other one. It’s not something you want to hang around college for all that badly. Because if you’re hanging around college that long, chances are you’re not going to do much after. Actually, that’s true with all of college, isn’t it? Remember, Otto nearly got tenure at Brown.

It hasn’t been that different than the football award. The last winner to truly dominate in the NFL is Cam Newton, and the debates over him aren’t finished yet (for legitimate and non-legitimate reasons). Baker Mayfield looks like he might have a chance to be something, but Johnny Manziel is a coked-up punchline, Marcus Mariotta just got replaced Ryan Tannehill, Jameis Winston should be thrown in a hole with no bottom. Derrick Henry at least looks serviceable, Sam Bradford is close to the same joke that Manziel is, and let’s not get into Tim Tebow. Strange how these things go.

To be fair to hockey, rarely is anyone drafted because of their award, as generally they’ve already been. However, Vesey, Butcher, LeBlahhhhh were signed after winning, and well, you get what you pay for.

As for Gaudette, he isn’t needed to be that much. With Pettersson and Bo Horvat taking the top two center spots, he can be something of an annoyance as a third center while hopefully providing more scoring than a normal checking center would.

It’s the checking part that Gaudette is going to have to work on. At the moment, Gaudette has the worst xGA/60 on the Canucks, and the worst xGF%. And that’s with starting two-thirds of his shifts in the offensive zone, so he’s got some work to do before he establishes himself as a piece they have to have going forward. To be fair to him, he’s been dragging around Antoine Roussel and especially Jake Virtanen most of the year. Roussel has use. Virtanen does not.

Anyway, beware the Ides Of Hobey…