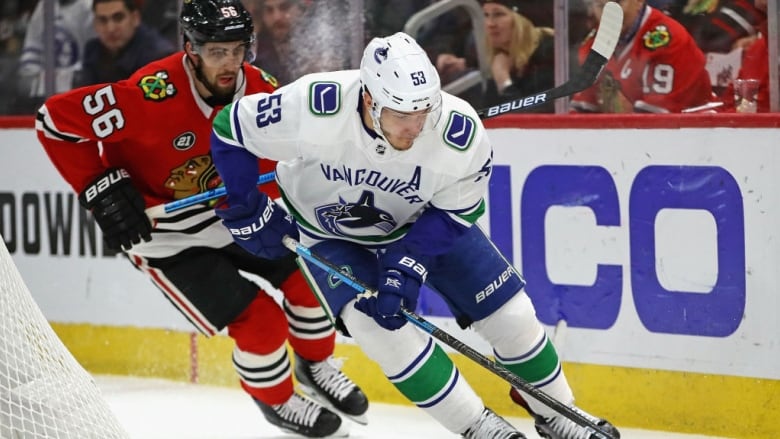 It could’ve be more fitting of a situation than for the Blackhawks to play well against a few decent/good teams (or at least teams in playoff spots in the West) when I don’t have to pay a huge load of attention, only to then take a dump all over all 200 feet of ice when I am on wrap duty. No, this isn’t about me, but something about them playing their worst game this month when the most pro-tank FFUD writer is locked in is kinda hilarious. And yeah, up until the last 8 or so minutes, this might’ve been one of the worst performances of the year for this team. Let’s do it, and see if I can find much to say:

– The Hawks really were lucky to be down one for as long as they were in this one, because they were getting killed by Vancouver for nearly the entire first 50+ minutes. Even when the Hawks were on the power play at times, it didn’t feel like they had the advantage. Vancouver just looked like the hungrier team, kind of being everywhere defensively, which was really the extent of their gameplan – defend well and hope to sneak shit in when the chances come. Not coincidentally, the Hawks are built to basically do the opposite, so it’s a smart gameplan from the Canucks. And in the end it worked. They should’ve had a bigger lead and were unfortunately stuck with just a 1-goal lead for most of the game, and forced to play an unnecessary overtime against a Hawks team that got a point from this one that they didn’t deserve.

– Let’s talk a little bit about what led to some of that Vancouver dominance. Primarily, this question – why are Brent Seabrook and Gustav Forsling on the ice at the same time ever? To have those guys on the ice together at any time is inexcusable, and at one point it led to a very-extended offensive possession by Vancouver in the second period that resulted in a few good scoring chances, though no goals. Had it not been Crawford back there, they would’ve been murdered for it. You can’t have the blind leading the blind in your defensive zone with a long change.

– Another important defensive question – why is Erik Gustafsson the defensman of choice to be the solo-dolo blue liner on the ice with Kane and Toews in the overtime period? I understand the idea of trying to generate offense, but that’s basically what you have Daydream Nation out there to do. And sure, the pickings are slim in terms of capable defensemen who are capable of playing very good defense in OT, but if you have 19 and 88 together, you don’t need 56 to generate anything. Put Murphy back there and shore yourself up in case you lose the faceoff and face a rush – oh shit, that’s what happened! Gustafsson got burned and Crawford got beaten by a shot he wouldn’t have had to face if his defenseman could keep his shit together in the zone.

– By now if you pay attention to the bylines (or just the opening to this) you know that I, Adam, am of the mind that the best thing long-term for this team is being not good. I’ve written it in back-to-back years, basically advocating for a tank I knew wouldn’t and couldn’t come. I think losing and maximizing the draft selection is the best route forward. With that being said, watching this team play like complete garbage after a string of good performances is beyond frustrating. I have never thought they were a very good team, and their last really meaningful win over a truly good team was in January. But shit, when you know that they are capable of competent, good hockey, watching them play incompetent, awful hockey, is difficult. Let’s just win the lottery, draft Jack Hughes, sign Erik Karlsson, and be good next year, okay?