Game #70 – Hawks vs. Maple Leafs Douchebag Du Jour: Morgan Rielly, The Leafs, And The NHL Must Show Their Work 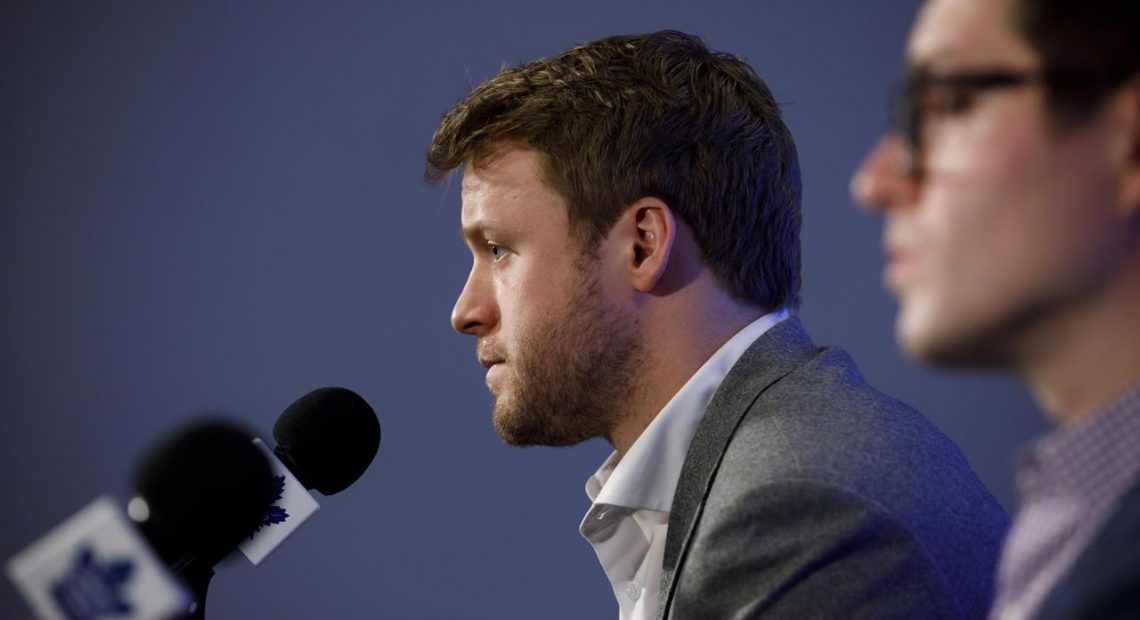 Nothing will come of Morgan Rielly’s escape of being labeled a homophobe officially, though some will never forget. It would have been hard to miss the story, but if you did, on Monday night, on-ice mics caught Rielly saying something that sure sounded like “faggot” at an official. The NHL launched an investigation, and yesterday it cleared Rielly after talking to him and the ref, Brad Meier. Still, Rielly’s defense of, “I’m 100% confident I did not use that word” makes it sound like he as an observer rather than the center of this story. It doesn’t instill 100% confidence in anyone else who has anything of a skeptical eye. Whatever, here we are.

What’s frustrating, or one of the frustrating aspects, is that the NHL, Rielly, Meier, or anyone hasn’t been forced or compelled to tell us what he did say. When seeing and hearing the footage, it’s hard to conclude he said anything else. And the fact that no one has sought to clarify what it was that did escape his lips, it raises a lot of doubt. Because this being the NHL, and we know their favorite tactic when dealing with anything controversial is to imitate an ostrich. And just wait until Don Cherry gets his grubby paws on this on Saturday. At least when Andrew Shaw went through this for the second time, he or someone was allowed to show what he was actually saying and what amateur lip-reading would have mistaken for that slur. There’s been no such impetus from the Leafs.

Brad Meier saying nothing was directed at him certainly is encouraging, but if Rielly were using that word simply as an expletive or exclamation, that’s no better. But we’ll never get there, so let’s deal with what we can.

What the NHL can do is empower its refs to eject and report any player they hear using that word or anything like it. It is purely farcical to believe that slur has only made an appearance on NHL ice on Monday and caught by a mic. This is a league populated by barely 7th-grade educated peons who have grown up and spent a great majority of their lives in one of the most closed and poisonous cultures we know. Surely something is getting said in scrums, and yet NHL refs have never ejected or penalized anyone for that kind of use. At least that we know of.

What’s likely here is that Meier doesn’t really want to start a furor, hears that word enough, and much like the rest of hockey culture thinks it’s ok to just muscle through it. Or that it’s not a big deal. Until someone proves what Rielly said or meant, there’s going to be a heavy level of doubt.

While it does share characteristics of victim-blaming, the NHL could use the opportunity to empower its refs to start penalizing and ejecting any type of inappropriate and offensive language on the ice. That doesn’t mean swear words obviously, but racist and homophobic slurs for sure. And they’re there. We know they are.

If nothing else, on the lowest level, the NHL might want to look at just how much abuse it wants its officials to deal with every game. Think about how many unsportsmanlike conducts springing from yelling at a ref calls you’ve seen this year. One? Two? Compare that with flags in the NFL, technicals in the NBA, or ejections in MLB (ok, that last one is probably too much, given that most MLB umps are babies). NHL refs hear it from every angle while reffing by far the fastest game there is. Perhaps allowing officials to throw a few more minors at coaches and players who get particularly yappy, and you may indirectly shrink the area where much more ugly stuff tends to slither out.