Game #69 – Coyotes 1, Hawks 7 – A Game Where People Throw Ducks at Balloons and Nothing is as it Seems 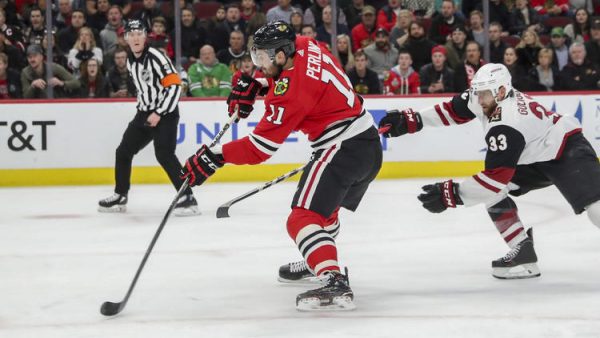 The 69th game, a DLR, a hat trick by Brendan Perlini…are you not entertained?! Nothing makes any sense but it certainly was fun. Hell, the Hawks are at .500, if you can believe that. And this weird on-again-off-again playoff race is, well, on again. To the bullets!

– The Coyotes are ostensibly the better team out of these two. Not by a huge margin, if you go by their records, but nonetheless that’s what the numbers say. But that didn’t happen tonight. Even after they went down a goal early, the Hawks were the better team. Brendan Perlini tied it shortly after old fan favorite Weiner Anxiety scored, and they never looked back after that. Brandon Saad had an effortless-looking tap in from a beautiful backhand pass from Toews (which is not actually anything close to effortless but he made it look that easy). The give-and-go passing that resulted in Kane’s goal in the second was textbook, and from the third line no less. Perlini nearly had a hat trick about 15 times, an then with literally three seconds left he finally made it happen. Chris fucking Kunitz scored, I mean really, what the fuck was going on with the Coyotes?

– Part of that answer is that Darcy Kuemper sucked out loud. It was probably just an off night, maybe the Hawks got lucky, I don’t know. I should credit their skill, I know, but I’m jaded and just think they rattled him early and it allowed the Hawks to jump out to the lead, which they amazingly didn’t surrender.

– And that really is the story here. This makes two games in a row with a downright solid defensive effort by one of the the worst blue lines in the league (will I have to stop calling them that?). The Hawks only gave up 25 shots, and that follows Saturday’s 27 shots given up…it’s nearly competent. In the third the Coyotes dominated possession but otherwise it was the Hawks (63 CF% in the first, 70 CF% in the second), and only two defensemen—Gustav Forsling and Nachos, no surprise—were underwater in possession all night. For the record Foreskin had a 46 CF% and Seabrook a 48; the rest were over 60.

— The corollary to that is how bad the Coyotes defense was…and they were bad. Even Hjalmarsson and OEL had a 38 and 31 CF%, respectively. I don’t have a real explanation for it, just like I can’t explain why Kuemper shat the bed. This sounds like a perfect time for them to bounce back strong tomorrow and kick the shit out of the Blues because why not.

— Patrick Kane isn’t a third liner, this goes without saying. But at this point who gives a shit? If CCYP needs to spread out the scoring and it results in six goals, so be it. I think it was actually a nice gesture to put Dylan Sikura on the top line with Toews and Saad because jesus that guy just needs to score already (who hasn’t heard that before amirite?), and Kane can produce anywhere and with any jamokes. Again, it makes no sense to screw with the lineup this way but I can’t argue with the results.

— Good for Brendan Perlini! Fuck the Coyotes and this guy’s been on a hot streak so if anyone deserved a hat trick, it’s him.

— Also good to note is that Crawford had another solid game. Yes the defense in front of him was on tonight, which of course shouldn’t be such a notable thing, but either way he was well positioned most of the night and looked solid. He ended with a .960 SV%, which they’ll certainly need if they’re going to do anything with this supposed playoff push.

And now, without further ado, your DLR…