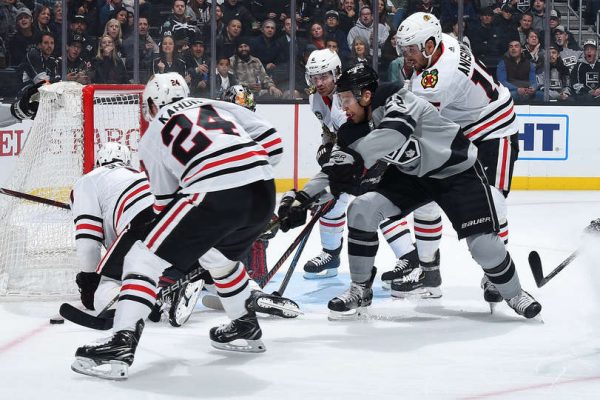 I wish that I could at least tell you that the number of goals meant this was an exciting game—that it was a high-flying game reminiscent of the halcyon days between these two teams that really wasn’t all that long ago. But I can’t tell you that. This was a shitty game played by two shitty teams. The score was as high as it was because both teams have awful defenses and goalies who are a shadow of who they once were (it hurts, it’s not necessarily true every night but today it was).

The Hawks did their best to give the game away by squandering any and every opportunity, and the Kings had a mixture of bad luck and incompetence to keep things ugly, but they managed to look like they actually cared about winning this one. Let’s do the bullets…

–The Hawks did that thing where they have a downright terrible start and have to play from behind. It’s been a little while since the busted out their now-classic down-by-two-goals-less-than-five-minutes-in shtick, but we got to see it here today. Two dumbass penalties right away—one being by Dylan Strome which kills me because you know I love that guy and here he goes and has a stupid trip—and the otherwise-useless Dustin Brown and Sean Walker both scored. The third goal by Ilya Kovalchuk was the first one of the day that Crawford really should have had (it would not be the last). Seabrook’s ass saving a goal and Brandon Perlini’s goal at the end of the first were the only things that kept it mildly close. And this is despite the Hawks leading in possession (58 CF% all situations) and leading in shots (15-11). Hockey is weird and sometimes numbers don’t tell the whole story.

–Wow, was the defense bad today. I mean, we all know they’re bad, but let me share with you some actual things that happened: Slater Koekkoek got burned by Dustin Brown and then screened Corey Crawford, directly helping both of the Kings’ first goals. Keith and Seabrook did a “you get it, no YOU get it” routine as they both literally watched the puck slide between them in the defensive zone. Gustav Forsling was looking to move the puck out of the defensive zone and had a wide open neutral zone, save one body in his field of vision—he managed to doink the puck off that one body leading to a turnover. Forsling later got swatted aside by Anze Kopitar which led immediately to the Kings’ fifth goal, which was the dagger in the game.

Oh yeah, and Nachos’s ass blocked literally half the net and saved a goal in the first period which, despite all the guffawing from Pat and Eddie, was actually terrible because it never should have happened. Seabrook’s ass was facing the shot because he had fallen down and was half in the net facing away from the play, and Keith got smoked by Trevor Lewis who sailed right in and had the scoring chance. Again, numbers don’t tell today’s story. Every Hawks defenseman was well above water in possession but they came nowhere near passing the eye test.

–Slater Koekkoek and Gustav Forsling were particularly egregious. In addition to the two fuck-ups that basically assisted on the first two Kings goals, our current favorite punching bag Koekkoek waved his stick inconsequentially in a passing lane doing absolutely nothing to prevent Kempe from scoring, after Jonathan Toews simply gave up. That goal was on Toews as well, no doubt, but Koekkoek was all-around terrible except for his one assist, which was really thanks to Strome (more on that later). Forsling’s dire performance behind the net on Brendan Leipsic‘s goal was painful to watch.

—Crawford wasn’t very good today, we have to just say it. One would think that if they weren’t playing an actual good team tomorrow night, CCYP may have pulled him after the third goal in the first period. Maybe not, because that wouldn’t have helped his confidence in any way, I would think. But regardless, his .760 SV% wasn’t even mediocre; it was wretched when you consider the opposition and the fact that the Hawks only gave up 25 shots.

–A small bright spot: Dylan Strome is still generally good, dumbass penalty notwithstanding. On Perlini’s first goal, Strome “hustled” to save icing (I use quotation marks because it was the slowest, most awkward hustling I’ve ever seen, but whatever I can barely even skate), and patiently held onto the puck below the goal line until Koekkoek got off the bench and into the zone, who then passed it to Perlini. Strome was by no means perfect, but hey I gotta find something, right?

–Brendon Perlini had two goals…had to be the best game of his life and it was totally wasted and useless.

–Dylan Sikura had a nice scoring chance midway through the third that Quick stopped and I’m starting to believe he will never score in a Hawks sweater. Cue the Beavis and Butthead reference.

OK, I’m exhausted from this game. From watching it, from writing about it, everything, I just really need a stiff drink. The Hawks just got beat by the worst team in the conference with a 10-game losing streak. They lost despite not giving up 40+ shots, as is their wont, and despite having significantly better possession the entire game. Despite all logic and references to this as a “must-win,” and now it’s on to a game against the league’s elite. Eat Arby’s.