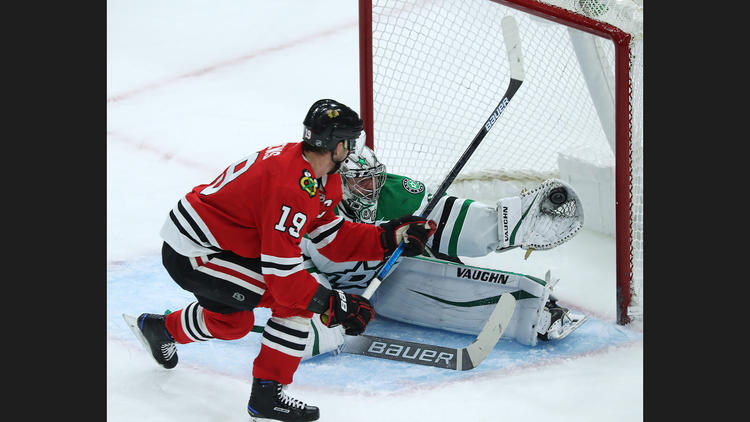 You wanted to believe. I wanted to as well. Even though it was mostly due to the remedial class nature of the bottom of the Western Conference, the Hawks did have a chance to make a real step this weekend. Or at least if you looked at it at the right angle in the right light. But at some point, you can’t outrun who you are. It’s hockey, so you can do it for a month, maybe even more. But eventually, there are only so many magic tricks.

The Hawks, and some of the more dedicated followers, will argue they played well these past two games, and lost, to cancel out some of those games where they were speed-bagged and yet bounced and goofed their way to a win. I’ll give you Friday, but despite 47 shots today I would say today’s effort was pretty damn choppy. But no matter how you view it, remember when the Hawks “playing well” didn’t include things like…oh I don’t know, Forsling passing it to….someone? Leading to the Stars second goal. Or it didn’t include Seabrook falling asleep on a kill and allowing Radulov right up the middle and forcing Keith to trip him up on a penalty kill you have to have? Or things like Friday where Gustafsson lets someone up the middle or Koekkoek’s “pass.”

At the end of the day, they’re just no damn good. That seems simplistic, but it’s the heart of it. No matter what they do elsewhere, they’re never going to be rid of their ode to piss-pooredness that is their blue line. The forwards can do anything, but at some point, or a few points, every game one of their D is going to fuck up royally. You can’t keep scaling that mountain, especially when the D will always find a way to kick you back down halfway that mountain.

Let’s get through it…

-Let’s stay with the defense. Perhaps I’m being harsh, but I’m being honest. Gustav Forsling is the worst player in the league. He has no vision, he’s slow, he’s not strong, and he’s dumb. There is nothing he does well aside from occasionally let off a bomb when he’s got five minutes of time and a city block of space. His turnover today to cause the second goal was schoolboy stuff, and that’s being kind.

Which leads to a whole discussion about the placing of Henri Jokiharju. There is no argument that Forsling is better than Harju. As there isn’t one for Slater Koekkoek either, who was quite the sight after a rambunctious pinch that led to him getting destroyed by Faska and losing a skate blade. The idea that Jokiharju isn’t among the six d-men who give the Hawks the best chance to win is laughable at best, negligent at worst.

You needn’t look any further than the other team today, who have Miro Heiskanen, whom the Stars have done their best to shelter even when ravaged by injury. That said, it’s not on Colltion that one of his best four d-men is a 19-year-old who probably could use some seasoning in the AHL. That’s roster construction. But it flies in the face of everything the Hawks are telling you about their own team.

If they are truly chasing the playoffs, then Jokiharju would be here to play and help, because he’s one of the better options you have. But if this were truly a playoff team, they would have done more in the summer than allow their GM to say nanna-nanna-boo-boo to their coach with a couple of bottom rung signings.

-There was a stretch of play in the 2nd period that lasted 5-10 minutes where I’m not sure the Hawks completed a pass.

–Dylan Sikura had a rough one, with a 27% share and his line getting mauled for a couple shifts. That’ll happen, but I would be disappointed if he doesn’t stay on the roster the rest of the year. He needs a goal, yes, but he’s mostly been doing the right things in a third-line role.

-Honestly, it would probably be more beneficial for the Hawks in the long run to play well like they did on Friday, sort of did today, and lose most of the games. The structure would be something you could build on, and the draft pick would be welcome. However, as silly as this season has been, I doubt that’s how it’ll go.