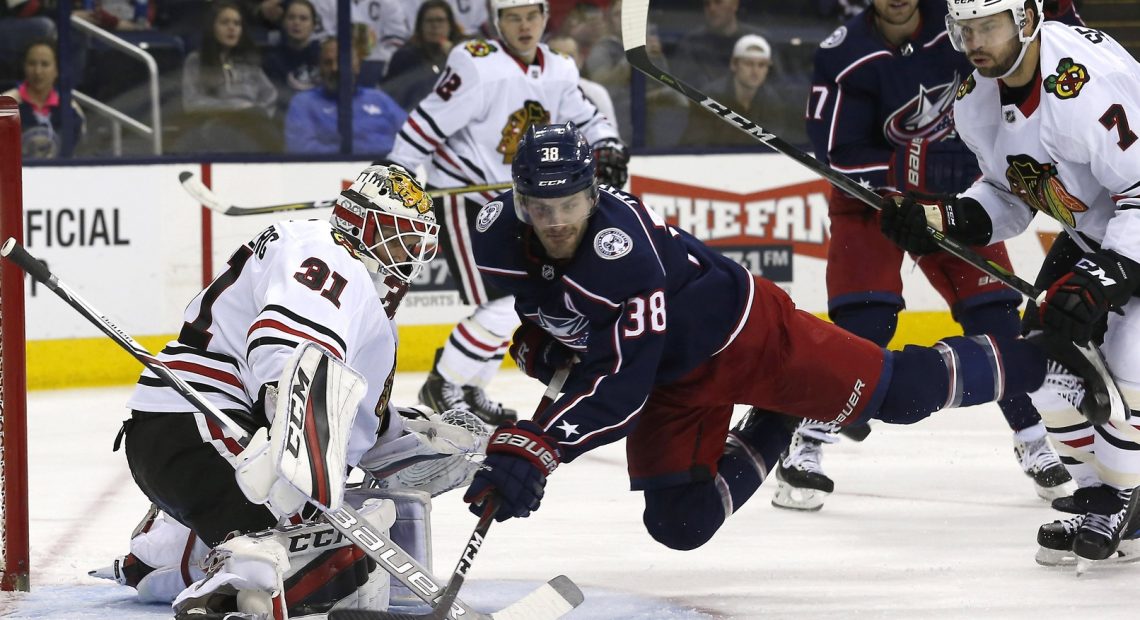 Tonight the Hawks showed up and seemed actually interested in playing hockey. Unfortunately that wasn’t enough, in what was a disappointing follow-up to last night, and a weird reversal of Wednesday night, where they weren’t interested at all yet managed to pull out an overtime win. Well, to the bullets:

–Forsberg made one mistake too many or else he would have had a solid game. Anderson’s goal in the third was one that he should want back, and that’s the one that made the difference. Prior to that goal, Forsberg was screened on the Atkinson’s goal in the first, which wasn’t really his fault. Early in the second he had a sequence of good saves, including on Jordan Oesterle, who tried really hard to score an own goal. But, Forsberg finished the night with a sub-par .897 SV%, and I have a feeling we’ll be seeing the J-F Berube Show soon enough.

–Our Cousin Vinny had a strong performance—in fact, his entire line did once again, in whatever composition that ended up being throughout the game. Hinostroza had an assist on Kampf’s goal in the first, and he hit the post twice in the second. Granted, his pass to Nachos was intercepted and that’s what turned into Dubois’ tying goal. But he bounced back with more chances in the third, and generally looked like a coked-up gerbil, as we’ve come to expect out of him. Plus he had a 69.6 CF% (NICE).

–Ryan Hartman took an untimely penalty late in the first, which led to Atkinson’s goal, and he was summarily benched for the rest of the game. I get that Q was pissed, and it was definitely irritating at the time, but the punishment was way out of proportion to the crime. It wasn’t even an egregious hook—it could have easily been a non-call, especially since they let Oesterle slide on a way-more-egregious interference on a breakaway (which also could have been called a hook) early in the first. The reasons this overreaction is bullshit are 1) is he really going to become a better player by getting benched after a ticky-tack call? and 2) Hinostroza to Hartman to Kampf resulted in the first goal, and that was minutes into the game. If these guys had more time to work together, maybe we could have scored more than one measly goal following that one.  But no, Q had to SEND A MESSAGE.

–Tomas Jurco got his first goal (anyone? anyone out there want this guy??), and it was off a beautiful feed from Gustafsson way back in the defensive zone. So that was fun.

–Sergei Bobrovsky had a .939 SV% and definitely kept the Jackets in the game, so I don’t want it to sound like I’m taking anything away from him. But damn the Hawks couldn’t hit the net. They ended the night with 33 shots on goal, but it should have easily been 10 higher than that if they could hit the proverbial broad side of a barn.

–Connor Murphy had a somewhat better game than last night. He finished with a 55.2 CF% and didn’t make any dumbass blunders. So that was fun too.

–We managed to out-shit the worst power play in the league. Columbus came into this game ranked dead last on the man advantage, with the Hawks at a sterling 29th. Yet, the Jackets scored on the only power play they had (that aforementioned Hartman penalty), and the Hawks went 0-for-3 with their usual dismal power play performance.

I suppose it’s frustrating that the Hawks couldn’t fuck with the Jackets more and take them out of that last playoff spot, because fuck those guys, that would have been funny. But honestly, the Jackets may do that to themselves, and at this point if we miss out on points, it’s kinda, well, pointless, for lack of a better term. I feel bad for individual guys who genuinely tried but couldn’t pull it out, but at least they made an attempt tonight. Onward.

Line of the Night: This one is dumped in…will there be a retrieval? —Foley, asking what we’re all wondering on a power play zone entry.