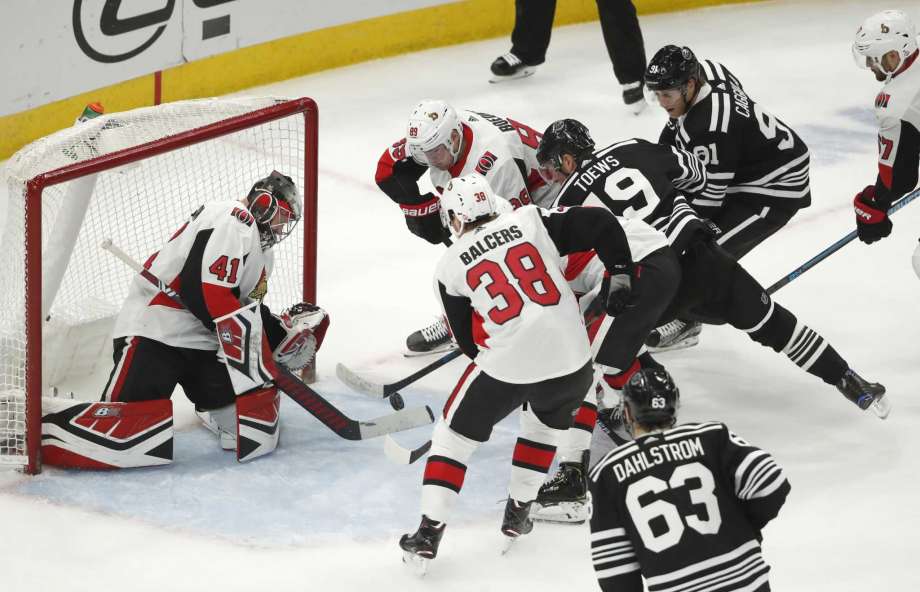 Corsica was broken tonight, probably by this game

The Hawks schedule in February was always favorable because while they are certainly not a good hockey team, they aren’t really close talent-wise to being one of the worst in the NHL. When you have Patrick Kane and Jonathan Toews and Alex DeBrincat and Brandon Saad and Dylan Strome all having good seasons, you’re not gonna bottom out, even if I in particular thought doing so was the best route. The blue line is still garbage and the system that Colliton is running is getting them torched in their own zone nightly, but they still can’t be one of the worst teams.

That being said, nothing is in place to stop them from playing down to the competition, and while the scoreline might indicate a fun and exciting hockey game, I felt more like I was watching a horrific game that was trying to get me to love it. Hence, the title of this wrap. Let’s just get to the bullets.

– So, in the interest of full disclosure, I missed the first period live (lost track of time), but caught up on the highlights in the intermission. What I saw was a lot of capitalization by the goal scoring team on bad plays from the opponent or a lucky bounce on just about every play. The first Sens goal was just piss poor on Delia, another example of how he still isn’t quite in franchise goaler territory yet. Sure it was on the PP, but it was one he needed to have. The second Sens goal was just dumb luck as the Hawks were caught with the pants at their ankles on defensive transition. Just about every Hawks goal save for DeBrincats PP tally was the same. It was just ugly hockey and bad goaltending, and it got disguised by the puck finding the net. If most of those pucks stay out, we would’ve been talking about a truly boring, awful hockey game after 20 minutes.

– The rest of the game mad a bit more sense, but it was still not good on either side. Carl Dahlstrom got absolutely toasted by Thomas Chabot in the third period before Cam Ward gave up a pathetic short-side goal. Neither team’s blue line could fight their way out of their own defensive zone if it was a wet paper sack. It was just bad. At least the score made it kind of interesting, I guess.

– With all that being said, there was still some positivity to be found here too, but nothing really new. Top Cat is still really good at scoring goals. Dylan Strome continues to flash the tools that most scouts thought would compensate for his skating – his goal was such a perfect example of his instincts, “hockey IQ,” and soft hands. Those two specifically are really onto something, and it lets Colliton skull fuck the other team with Toews and Kane together.

– And boy, those two dudes can play together. I know that Q didn’t like relying on them together for the sake of balance and making it harder on the other teams, but it kind of looks like a feather in Colliton’s hat to be doing it so much. I don’t really think it’s much of a coincidence that they’re both having near-career years while spending so much time together. And it doesn’t even matter who is on the other wing, as long as they can stand up straight and hold their dick at a urinal, which Drake Caggiula is appearing to be capable of.

– So if I can stand on a soapbox here and use my conclusion on this wrap to make a point, here it is. You have two killer duos running your top two lines, with high skilled playmaking centers clearing the way for even higher skilled play making goal scorers who are usually the best player on the ice when they’re out there. Plus Saad’s had a resurgent year, and Kahun has been good, and you still might have something in Sikura, Kampf, Caggiula, and if you’re lucky one or two of the guys in Rockford. And people still want this team to re-sign Artemi Panarin to “shore up the top six” because there are “no good defensive options.” Motherfucker, if you went to liquor store for Zombie Dust and they didn’t have any, are you really gonna blow your money on Bud Light because you had a good time with it in college? No, you find another fucking way to get your Zombie Dust, bitch. So fuck off with this Panarin shit. Thanks.