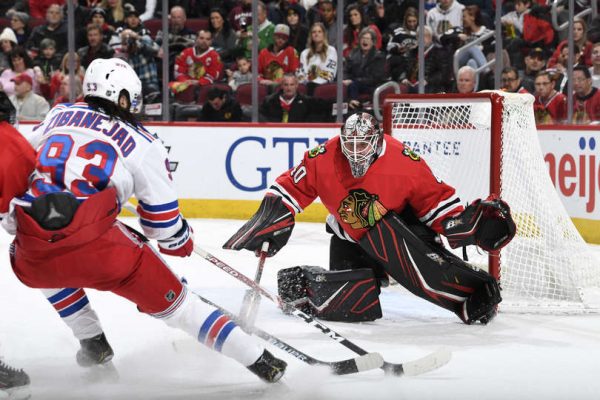 For a minute it seemed like they may have had something going, but then the third period happened. We have to file this one under “going off the rails,” and it may have just taken the last shreds of the Hawks’ playoff hopes with it. It’s been a long night so let’s just get through it:

–The first period was downright dull, with Hawks coming out of it down a goal, slightly up in possession (56 CF%) and even in shots with the Rangers (12-12). Filip Chytil‘s goal was a softie, which in retrospect was a harbinger of what was to come from Robin Lehner. But it wasn’t a disaster, by any means, just some mid-February boredom.

–Then, the Hawks did the opposite of what they usually do, which is suck donkey balls in the second period, and instead they were, shall we say, dominant in the second. Well, maybe not dominant per se, but at least in control. Jonathan Toews made a goal-line save early in the period and they promptly flipped the ice and Dominik Kubalik scored his 24th off a great pass from Duncan Keith, who got his 500th assist on the play. They led in shots (16-10) and again in possession (57 CF%), and they continued their actually functional penalty killing after Lehner punched Brendan Lemieux in the back of the head (which was kinda funny but not really necessary). Things were looking up–despite the fact that demand was so low that Sam had to sell his tickets for a measly $28, it was seeming like maybe the fire sale, in terms of tickets and personnel at the trade deadline, was a little premature.

–And then…it all fell apart. The Rangers scored five goals in the third period on 19 shots. Even just writing that out is insane. Suffice it to say, Lehner did not look good at all in that period. And no, I don’t mean that snarkily–he really didn’t. He hasn’t looked very lights-out since the All-Star break but this was something else. I won’t subject you to a breakdown of each goal he gave up (I’m nicer than that), but at least three of those should never have gotten through. And what’s worse, with the impending trade deadline his value just plummeted. Now it wasn’t totally his fault, as it never is with this team. Adam Boqvist had another rough night, but at this point I’m so infuriated with Coach Pete that I don’t even care if he did play badly. For example, he and Keith both got completely burned by Kreider on his goal, but Lehner definitely should have stopped it and I’m convinced that Boqvist’s mind is twisted with shitty coaching and an ass-backwards system that he’s trying to follow for the sake of not getting benched, but it goes against everything he knows and instinctually understands about the game, and the result is this general crappiness on top of being, ya know, a fucking teenager.

–One thing that did make this more entertaining than usual was the guys being on Hot Mic for the…well not calling the game, but narrating the game I guess. In addition to Sam’s bargain-basement tickets ordeal, they covered the inevitable video tribute to the sellout streak once they can no longer keep up the charade, along with deep thoughts from Matt and Fifth Feather, and the comments from you dear readers were priceless as always. We appreciate everyone who came along on this first simulcasting adventure and hope to bring you more soon.

OK, so there’s no denying the Hawks are really in some shit now, but maybe this and/or Friday will be enough to convince the front office to be selling everything that isn’t bolted down. Yes that’s a huge step that I don’t think they’re ready to admit, but it’s getting awfully hard to deny what we’re seeing. Onward and upward?