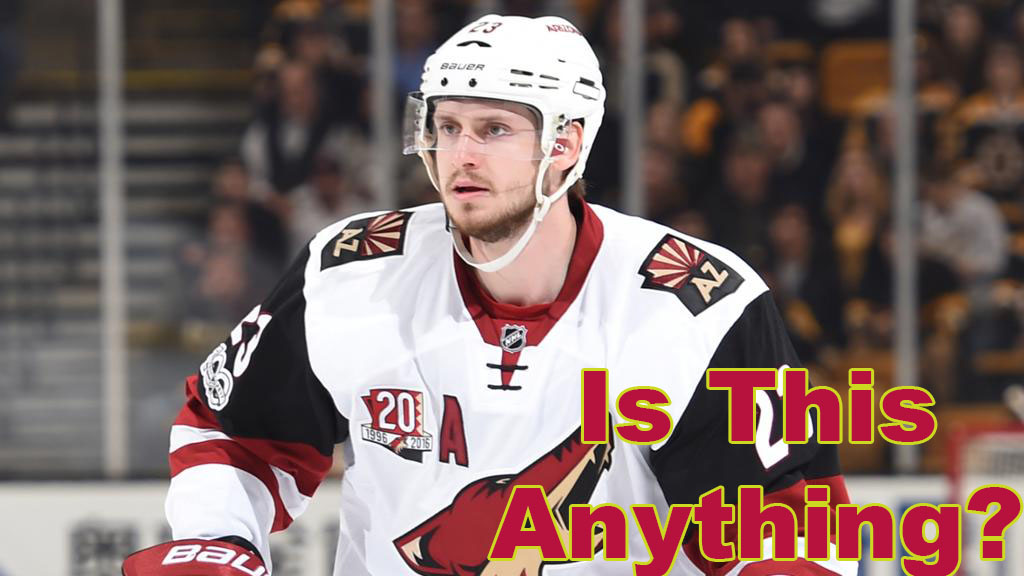 We used to spend a lot of our time, an alarming amount, devising trades to get our favorite players to the Hawks. Most of that time was devoted to Jarome Iginla back in the day. Darnell Nurse is another. This list could go on.

Oliver Ekman-Larsson made quite a few appearances in those fantasies. While he might not be the best skater in the league, he is certainly the most pleasing to the eye. To go along with his ever so smooth stride that just makes you weak in places you can’t be weak in, he has keen passing vision and the sense to run a power play from the point. He’s potted 20+ goals a couple times, so he had a good shot that he can get through. He’s managed 39 or more points (or that pace in the case of 2013) seven straight seasons. The underlying numbers are terrific. And he’s still somehow only 27.

And yet, the Coyotes always suck. So one has to wonder…do you have to give a shit about Ekman-Larsson?

To be sure, the Coyotes utter incompetence since 2012 doesn’t have much to do with OEL as it does their inability to put any talent around him, or all the trust they put in Mike Smith after whatever rabbits foot/horseshoe/monkey’s paw he had lodged in his colon in 2012 fell out and sunk the whole operation. There’s always been a “project” and a “plan,” but it never seems to get off the whiteboard. Everybody’s got a plan… as Mike Tyson told you.

You can’t help but wonder if OEL was THAT good, the Coyotes would have at least sniffed the playoffs somewhere around here. Erik Karlsson has certainly dragged not that much more to relevance. Ok, OEL isn’t Erik Karlsson. Who is? And he’s not going to be paid like him, as he signed on for an extension that will pay him $8.2M until 2025, whereas Karlsson will sign for something with eight digits. Fair, fine.

Digging in, OEL’s has always lifted what’s around him, no matter how much septic run-off it’s been. He’s run a relative-CF% of over 4.5% three times in the past six years, and consistently is above his team-rate. His relative-xGF% has consistently risen above those around him as well, including a ridiculous +9.74% in ’15-’16. But again, it didn’t matter.

Maybe it’s just the Coyotes haven’t had anyone to consistently finish the chances that OEL is either creating or providing the platform for. This is a team that had Radim Vrbata as a leading scorer as recently as two seasons ago. A d-man has led them in scoring in four of the past six seasons. No one has eclipsed Clayton Keller‘s 65 points from last year in that time. Clearly, OEL is the one standing around exclaiming, “I’m surrounded by assholes!”

OEL’s importance though can be debated. The last two Cup champs haven’t really had a #1 d-man to speak of. The first version of the Penguins one had Kris Letang, but not much else. This is in stark contrast to how the Hawks, Kings, and Bruins went about things. The Caps basically had four #2-3 d-men in their run last year, and the Knights couldn’t even claim that.

Maybe that’s an aberrations, and there are certainly a lot of ways to skin a cat. The game is moving toward a more forward-heavy system, where d-men are just asked to get the puck out to the neutral zone instead of carrying it themselves or passing it directly to someone. Are OEL’s skill going to be as valued going forward?

That’s hard to judge. The Predators have built through the blue line and got a conference championship and a Presidents’ Trophy out of it. They very well might have gotten a Cup out of it if their goalie hadn’t upchucked a kitten at the worst possible times in those playoff runs.

Still, one wonders if OEL has true, #1, foot-in-the-ass-of-the-world potential in him, if the Coyotes ever become relevant again. If he did, you feel like you would have seen it. Maybe we will in the coming years as Strome, Keller, Chychrun, and others start to finally develop. The Yotes had better hope so, otherwise they’re going to have to pay someone on top of Ekman-Larsson’s haul. And that can get itchy for a team that has an internal budget.

Tags: Arizona Coyotes is this anything? Oliver Ekman-Larsson