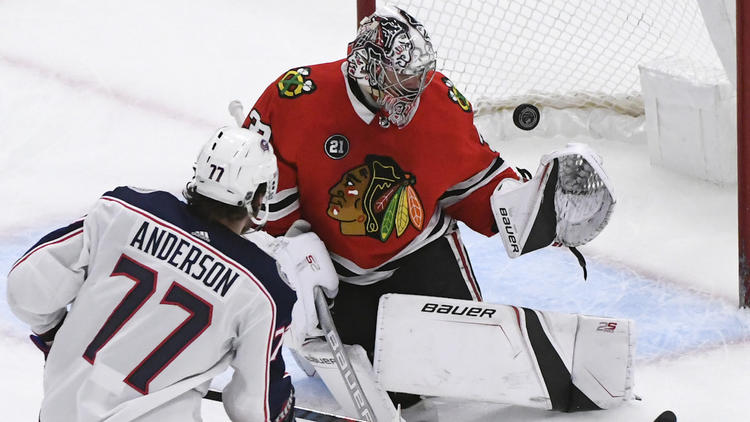 It’s ok, the Hawks will still get a solid slate of bums for a while yet. But what we’ve seen is that when they don’t get bums, and they have to play anyone serviceable in this streak, they’re just not up to it. Boston and Columbus have shown the world their true colors, and the Bruins and Jackets aren’t even really near the cream of the crop of the league (pulls out single-serving of half and half and starts complaining about Jack Tunney). The Hawks can actually do some things when the other team turns off, or put in a great 10-20 minutes, but overall, they still have some weaknesses they can’t hide against teams that have the patience, coaching, and skills to exploit them. Let’s dive in…

-The biggest difference last night, at least in most of the goals, was the difference in game-breaking speed. Other than Panarin’s lucky, blind deflection off a draw, every other goal for the Jackets was off a rush. Either they beat the Hawks on a change, or they capitalized on a turnover, or they got to the outside. When there is an opening, the Jackets have, at minimum, Atkinson, Panarin, Dubois, Anderson, Wennberg who can get away from you. Or at least the Hawks can’t catch. Who do the Hawks have with game-breaking speed? …still here….yeah, exactly. And that’s especially true on defense, where the Hawks don’t even have one d-man who you’d even describe as fast. At least now that Duncan Keith is either thinking about metal songs he’d like to listen to or flailing desperately at cleaning up Seabrook’s messes. There isn’t even one on the roster. Until the Hawks fix this, they’re going to be justifiably in a position they’d rather not be in (ok, I swear that’s all of them).

-This game will do nothing to stop the flow of Panarin-longing, which isn’t annoying at all. It’s not that Panarin wouldn’t help, because obviously he would. But he wouldn’t help enough, and certainly not for the price he’s going to command. I’m betting the minimum is $9 million a year, and could well go higher than that. You may scoff at that, but he’ll be coming off at least back-to-back 80+ point seasons, which not even Tavares could boast last summer.

Panarin doesn’t play defense. That’s where the Hawks focus needs to be. Sign Karlsson, Offer-sheet Trouba. Trade for Dougie. Pry Hampus out of the sinking ship in Anaheim. Any of these or of this ilk have to be priority one, two, and three. Not signing Kane’s fellow good-time boy.

Secondly, if winning were really central to Panarin’s thoughts, he’d stay right where he is. If Bobrovsky wasn’t dry-heaving his free agent year into the gaping maw of the universe, the Jackets are likely comfortably ahead in the Metro. They have a young, dynamic blue line and a good crop of young forwards. They’re not all that far away. But Panarin’s camp keeps whispering, or louder, hinting at “being on a coast.” Ok, let’s look at teams on the coasts:

Lightning – don’t need him nor can afford him

Bruins – ok maybe? The Boston press will get a huge kick out of him the first time he doesn’t backcheck.

So yeah, you tell me what matters to Panarin. He’ll always put up numbers, but you can have him.

-The metric numbers are skewed due to the dominant second period the Hawks put up, but at least that was fun. But that didn’t stop Keith, Seabrook, Toews, and Kane to have sub-even numbers. Coach Cool Substitute Teacher simply has to split up Keith and Seabrook, because they’re getting buried every goddamn night. They can’t play together, and the more they do the more likely it is that Keith just chucks it.

You’re going to be terrible defensively anyway, so get Jokiharju up here, and then your top four is some combo of Gustafsson, Keith, Murphy, and the kid. It can’t be any uglier than this.

Toews is a different problem. Much like the team, the results are better than last year but the foundation of the process beneath it is faulty. Sometimes you lose a draw clean, and I don’t want to get on him about that back-breaking fourth goal where that happened. But Toews has been cheating on the fastball all year, not quite getting as low on his defensive duties and looking to get out of the zone quicker. And hey, that’s how the game is played now and if he had any d-man worth a shit that might work even better, as they would just get the puck out and up to him.

But going forward, the Hawks already have one center they have to spot judiciously in Strome. They can’t really have Toews be another, though age may leave them with no choice, or they’re going to have to find another center whom they can dungeon along with Kampf.

-Brandon Saad with another 70% Corsi-share. No, the Hawks didn’t win that trade. But they still have a very good player as a result of it. Both of these things can be true, and we should all just accept it.