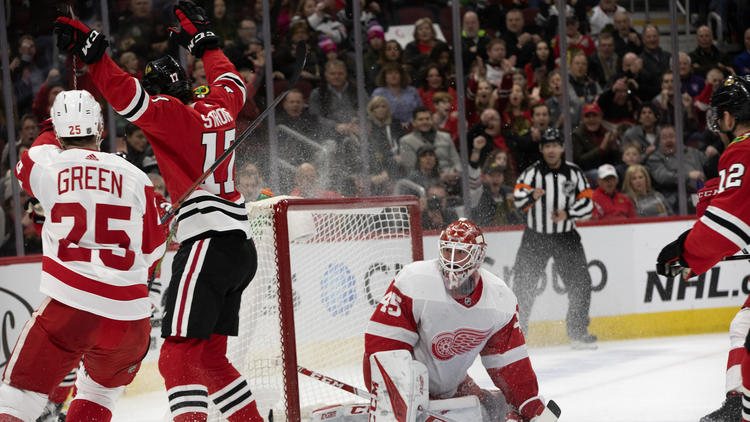 I had an argument with a musician friend a while back. He’s a touch on the hipster side. I told him I had just seen The Kills live. He asked, “What’s the deal with them?” I wasn’t sure what he meant. “Y’know, what’s the deal? What do they mean? What’s going on there?” Finally I told him that not every song or band has to have a deeper meaning or texture to them. Some things just rock or make you dance or make you feel good.

I’m fairly sure this seven-game winning streak doesn’t mean anything. You can’t give up 40+ shots to the Canucks and Red Wings and convince anyone you’re a team that anyone should locate a giveable fuck about. There’s probably an ugly market-correction coming. It could be next week for all we know, rendering all of March pointless. Or it could come later. Maybe it won’t come at all because hockey is dumb and weird.

But at the moment, it’s fun! It makes us feel good, at least most of us. It’s certainly more entertaining to watch. So I don’t want to stare at it too hard at the moment. That’s for another time. Because money, love, success, these things come and go. But wins over Detroit, those never get old.

-I want to start with Dylan Strome. He was my subject on Friday, because if there’s a legitimate point to the rest of the season it’s that we want to see signs of what’s to come from new places. And at least in the first period, and flashes in the rest, Strome was making plays all over the ice. We’ve seen his presence in front of the net, we’ve seen a pretty lethal shot, but the last two games we’ve seen the vision that was the main billing when he was drafted. He only racked up two assists but on another day could have had four, and it’s that kind of playmaking that makes you really excited about what’s to come. He has the ability to make the pass/play that only few can see, or conjure something out of nothing. That’s 30 points in 32 games as a Hawk for him.

-Let’s stick with Strome, because the Wings second goal was another example of what’s not working for the Hawks’s defensively. And this isn’t to single out Strome. Niklas Jensen skates out of the corner along the boards toward the blue line with the puck, with Strome on him. But because Strome isn’t quick, Jensen gets a step. Kahun is covering the point-man, but sees that Strome is beat. But there’s no communication, so they neither switch not stick with their man, and Jensen has a path to the middle of the ice to find Gustav “That’s Good” Nyquist, and we get Cam Ward looking behind him.

There are a few sticking points for me. First of all, this shit is still happening and all it would involve is more communication. Second, Strome is always going to be hard up in some of these due to footspeed. If he were instructed to to play a little softer, keeping things to the outside, and not worry about trying to win a race, it would be fine. Jensen skating away from the net along the boards isn’t really a problem. It’s when you’re trying to apply high-pressure that it becomes so.

Under the old, more zonal system, when a player got beat and someone else had to cover for him, he knew the area he had to recover to. He didn’t have to worry about players moving around. He would have must moved to the point while Kahun dealt with Jensen. And it’s not just Strome, The Hawks just don’t have the speed to do what they’re being asked, because they’ll lose most of these races. It’s akin to someone getting broken down off the dribble in basketball. Someone has to help and then someone else is open and then it’s a mess.

The Hawks can’t go back now, but when it’s on the outside the Hawks can play a little more off, or softer, or more toward the middle, whatever term you want. They don’t need to chase to the boards, because they’re too slow anyway. Right now, any team with a modicum of talent and scouting knows that all they have to do is get possession down low, skate out toward the blue line, have the point-man crash down at the same time, and the Hawks are suddenly wasted and can’t find their way home.

-The only Hawks on the plus side of the possession-ledger were Erik Gustafsson and Slater Koekkoek. I said it didn’t make any sense.

-But hey, they won without scoring a power play goal. So that’s like, something.

-People, we have found a blue line worse than the Hawks’! Niklas Kronwall dies like four years ago and it’s just wonderful that the Wings are making noise about re-signing him. He’s 38, and in hockey years he’s 125. Dude got smoked by Dominik Kahun repeatedly.

-Speaking of Kahun, I think you’ll know the Hawks are ready to be good again when their third line is something like Caggiula-Kampf-Kahun. And he’d be a real weapon down there. Another effective European scouting. Maybe the Hawks should import their European scouts to the pro scouting staff.