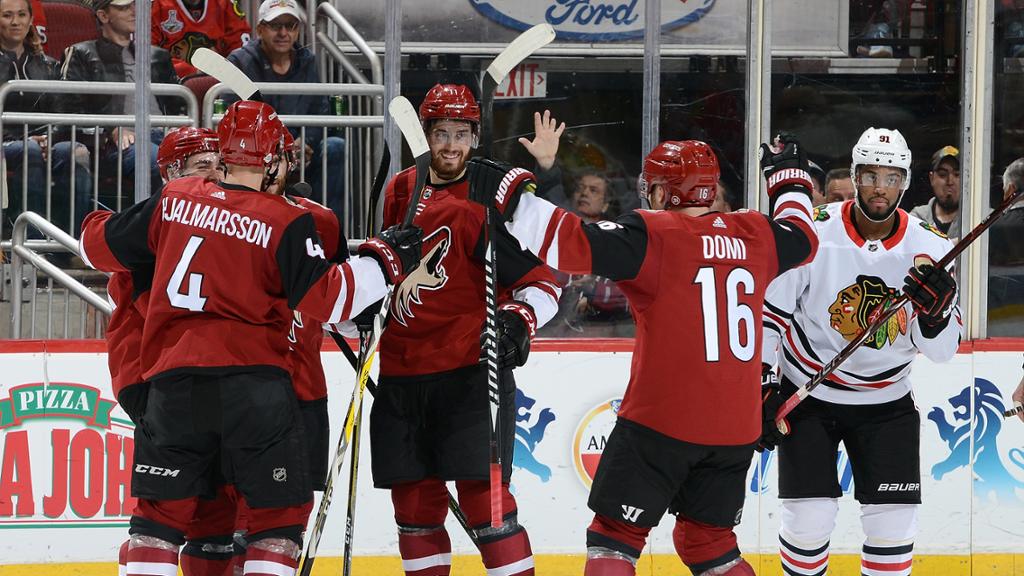 Tonight’s effort killed whatever sliver of hope there was left for a playoff run this year. I could go on about how the numbers say the Hawks should have won, or point to the fact that the team shot 2% tonight despite taking 38 shots, but it doesn’t matter. All we could have asked for was an effort, and aside from two players, what we got was one of the saddest displays of Blackhawks hockey in recent memory.

There’s more to clean up than we have time for, but let’s try. To the bullets.

– It’s been a long, long time since Hawks fans have had to deal with this kind of answerless floundering. I find that when that happens, the best you can do is look to the positives. And one of the shining beams of hope for next year and beyond is, without a doubt, Alex DeBrincat. Despite playing with the somehow-dangling-trade-bait that are Bouma and Wingels, DeBrincat showcased the skill that is going to make him a star in this league. He was the only consistently noticeable Hawks forward tonight, making plays by himself and scoring the Hawks’s lone goal.

If the point of having him on a line with Bouma and Wingels was to make them look good, mission accomplished.  And if you’re into palace intrigue, DeBrincat made mention of how the team had to “come out ready to play” against a team like Arizona during the second intermission. It’s both encouraging and disheartening to hear a 20-year-old rookie have to state the obvious with such obvious frustration and implied responsibility, but it’s been that kind of year.

– The other bright spot tonight was Erik Gustafsson. He found himself QB’ing the power play after Jordan Oesterle turned back into Jordan Oesterle, and he managed to look decent doing it. His entries were passable, at the very least. He also had a few aggressive pinches that make you think he might have some offensive instincts, and even rang a shot off the post late in the second.

– Now, to the bad. Let’s start with the obvious: The third goal allowed by Forsberg was not only the dagger for the game but also the season. After he let a horrid-angle shot slip under his legs, you could see everyone but DeBrincat and Gustafsson shrug and wonder whether the losing streak will apply to the tables after tomorrow night’s game. Glass Jeff was no better, but what did you expect? Makes you long for the days when the worst we had to deal with was laughing at the jamokes who said Crawford had a weak glove hand.

– If Jordan Oesterle doesn’t sit tomorrow, I’m kicking whoever’s driving the FIRE Q bandwagon out of the seat and flooring that fucker straight down Madison St. with my bare red ass blowing farts until someone answers my call. His complete disregard for the basic tenets of defensiveness led directly to the first two goals. On the first goal, after Anisimov lost the faceoff into his skates, Schmaltz managed to find the puck. He reached his stick out to poke it to Oesterle, who somehow overskated it, leaving Rieder all alone to streak behind the goal, pass it out to Chychrun, whose shot deflected off Domi and in. On the second, he set up Keller just perfectly by ringing a pass directly to his stick behind the net. He had a nice 20-game run or whatever it was, but at the end of the day, Jordan Oesterle couldn’t cut it on an Edmonton team who thought Adam Larsson was an equivalent comp for Taylor Hall. It’s time to quit sniffing the model airplane glue, Q.

– Speaking of firing Q, tonight was the first night where I seriously thought about who’s going to replace him after this year. This isn’t to say that Q is a bad coach, or that he will go down in Hawks lore as anything but the legend he is. But the kind of failure we’re seeing is probably going to require a bigger fish than Mike Kitchen to be sacrificed. Whether that’s fair is another question for another time, but tonight’s effort was the exclamation point on the most disappointing year the Hawks have had during this dynasty run, and it’s easier to fire a coach to send a message than just about anything else.

I wish I had answers for you all. I know that “Team shooting percentage is way down” doesn’t make this year suck any less. I know that hearkening back to all the Cups this team has won won’t make this year just go away. But while this year might be a lost cause, there are still a bunch of young players to watch as the year closes, including DeBrincat, Duclair, Gustafsson, Kampf, Vinnie, Murphy, and yes, even the ghostly Brandon Saad. I still contend that, based on the numbers, this is simply a terribly unlucky year compounded by losing the best player they have in Corey Crawford. Blowing up this roster would be a fool’s errand.

That said, you feel that after an effort like tonight, or like this year in general, there are going to be some paradigm-shifting changes on the horizon.