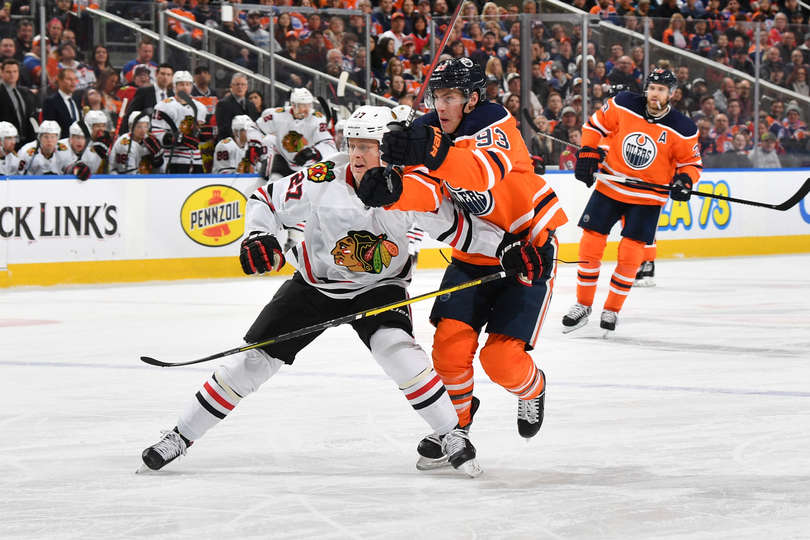 – The Blackhawks failing to beat the Oilers without Connor McDavid is embarrassing, but the reality is that this truly is not on the roster of players on the ice tonight. Sure, the typical characters had their typical characteristic moments – Adam Boqvist got a little floaty in his own zone, Erik Gustafsson got caught out of position, Alex Nylander failed at competency, etc. You get it. But at this point, those things are somewhat expected, and they’re also things you can live with because none of them are true killers (well, Gustafsson’s shit can be, but it wasn’t tonight). No, this all comes back to Jeremy Colliton. What is about to follow is my somewhat raw feelings on this sad excuse for a hockey coach.

– Let’s start with Jeremy Ventura’s first mistake of the day, which was healthy scratching Dylan Strome. In a game that the Hawks needed to win to keep themselves in a spitting distance of the playoff hunt, he scratches one of his three best centers to play Alex Nylander *and* Matthew Highmore. Because when you have the chance to scratch a guy with 30 points in 44 games this season in favor of two guys who don’t know which net they’re supposed to be shooting at, you gotta do it. This man couldn’t coach a high school team.

– Now let’s get to the power play, which was complete ass cheeks for the second straight game that also resulted in an embarrassing loss in Western Canada when you needed a win. And hey, I am no scientist, but maybe the fact that Zack Smith and Erik Gustafsson are on your PP1 while Alex DeBrincat and Adam Boqvist are on your PP2 has something to do with that? Maybe because that PP1 with Smith and Gustafsson also features three other lefties so you’re cutting yourself off from a whole fucking side of the ice? Who’s to say really? Certainly not Coach Mayor Pete. This man’s couldn’t fight his way out of a wet paper sack with scissors.

– And then there was just the flat out lack of preparation. The Oilers took the lead in this game just 73 seconds after puck drop, and that was because the only time the puck left their offensive zone after puck drop was when the Oilers made an errant pass and sent it back down the ice themselves. It had nothing to do with the Blackhawks generating any sort of defensive pressure or offensive transition. And that is because Jeremy Smooth Brain’s system is such a mess that even the McDavid-less Oilers know that all you need to do is skate fast around them and the system collapses because you have forwards deep and defensemen near the blue line. Seriously, the Oilers scored their goal on a transition that started with Alex DeBrincat getting burned at the point of the Hawks offensive zone (not that they were doing anything worthwhile in there) because he was the last man recovering after being behind the net defending. That is a system that makes absolutely no fucking sense, constructed by a man who’s brain is so smooth you could bowl with it.

The players might share a small part of the burden for not just coming out with a sense of urgency in a game that was clearly must win, but it’s still the coach’s job to motivate his team to get up for these kinds of games. To convince them that they are important and why. And he clearly didn’t because he clearly cannot. He is a dead man walking.

– The only player in this game who does get a portion of the blame though is Robin Lehner, who had a rough first 40 with some truly mind-numbingly stupid moments. Playing goalie is very hard, and Lehner has been fine this year so I don’t want to make more of it than is necessary, but there were a few times where he thought he had the puck and he just didn’t, and it cost the Hawks at least one goal if not more. Again, it doesn’t need to be a big issue, but it was a problem tonight.

– Hawks go next tomorrow in Vancouver, and lucky me, I don’t have to watch that one.