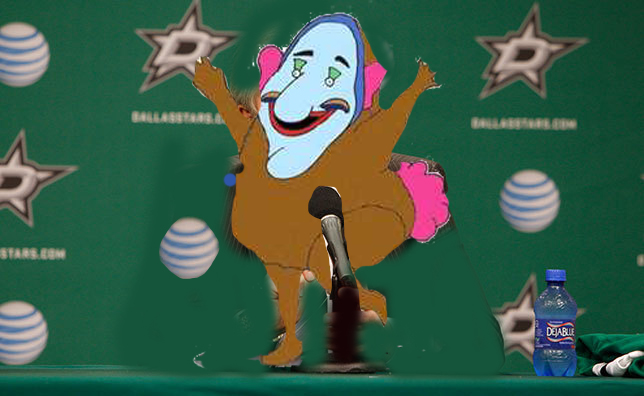 The level of our bile for the way the Detroit Red Wings are covered is no secret. It also spreads to those who come from the Red Wings/Ken Holland tree, even though it’s been well-proven by now that Holland is something of a blithering idiot. So because the hockey press has to apply that gloss to someone for fear it would go bad, it goes to Jim Nill. Because he was Holland’s assistant and got lucky in a couple drafts.

Let’s be clear: Nill’s Stars have won one playoff round since he showed up. It’s nine playoff wins in four seasons. And yet every time Nill does something in the summer, there’s a rush to the payphones (we assume the Canadian media still uses payphones) to declare the Stars the big winner of the offseason.

Yes, the Tyler Seguin trade was a good one. Hiring Lindy Ruff was not. Trading for Antti Niemi was not. Trading for Shawn Horcoff was not. Jason Spezza sort of worked out. Ales Hemsky most certainly didn’t. Trading for Stephen Johns was a decent move, even if Patrick Sharp came with because he didn’t give up anything. Signing Johnny Oduya… baddy McBad. Ben Bishop might work out, though it has to be this year.

Moreover, Nill’s drafting record is pretty spotty. Of his picks, only Julius Honka and Valeri Nichushkin have made an impact. The former might sit for Marc Methot (another brilliant move) and Nichushkin in back in Russia. Faksa, Shore, and Ritchie were all picks of his predecessors.

Nill might make up for it this year. Hitchcock has given the Stars some structure and the Central hasn’t been all that impressive. A first-matchup with Winnipeg or St. Louis would be inviting. Nashville less so. But it still screams second round, and then whatever move he makes this summer will once again be crowned “Offseason Champs!” Maybe they can call the Capitals to find out where to get useless banners made.

Tags: Dallas Stars Jim Nill we do this every time