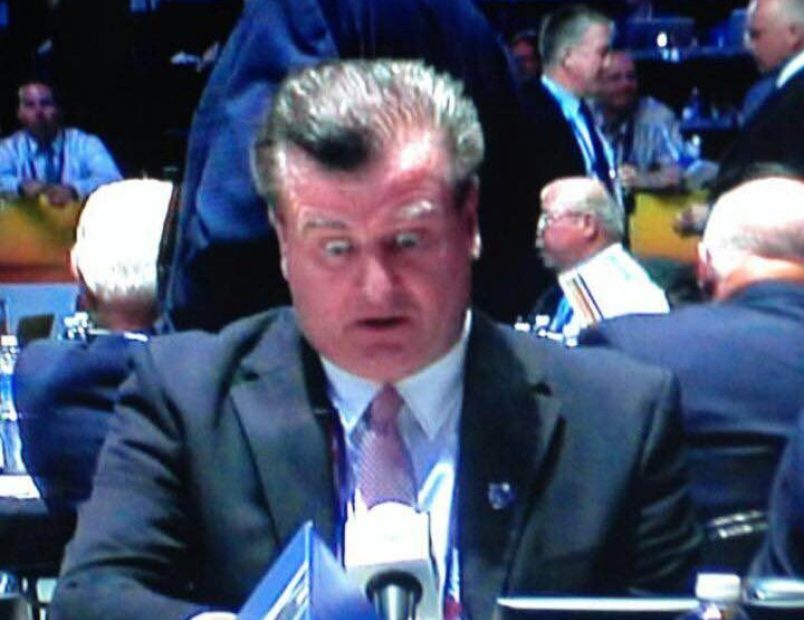 You’d have to think the bar of being the dumbest team in Western Canada would require galactic limbo skills to get under the Edmonton Oilers. The Vancouver Canucks are making a real fist of it.

For the fifth consecutive season, the Canucks are hemming and hawing about whether they want to do a full rebuild or not. At this point, it doesn’t even really matter because they suck out loud and they’re going to get a high pick. Perhaps if you act stupid long enough you get what you want anyway. At least in the NHL you do. What they won’t get, likely, is a top three pick and that’s what they need. That’s where you get the franchise turners.

GM Jim Benning came aboard after the ’13-’14 season. You may remember that one as the blimp crash with John Tortorella that saw the Canucks miss the playoffs. It was clear that the cycle with the Sedins and Kesler and Co. had come to an end. This was a team that needed to start over, and got something of a head start when Kesler basically asked out. And Benning boned that hardcore, as he got Luca Sbisa, who never turned into anything for anyone, Nick Bonino who never became much more than a third line player, and the pick that resulted in Jared McCann who they shipped off to Florida for Erik Gudbranson, who is a glorified door guy.

Benning added to that by signing Ryan Miller and Radim Vrbata in a chase, and watched that team miracle its way through a terrible division into a playoff spot where it promptly got whomped by Calgary. It caused them to rush Bo Horvat. And it taught them all the wrong lessons.

Benning at least waited another season before handing out more dumb money, electing to basically keep the fake playoff team together. When that predictably didn’t work, Benning got stupid again. He signed Loui Eriksson and traded for Gudbranson, which gets the Canucks only farther from a Cup with contracts they can’t move for players who can’t really play, or not anymore in Eriksson’s case.

And the appear stuck in neutral again. They’ve stated this week that they won’t trade Gudbransson, even though he’s a pending free agent and does nothing (you can always con a team into trading for a big d-man because they’re all dumb. Hell, Tallon as openly said he wants him back in Florida). They apparently won’t trade perennial deadline acquisition Thomas Vanek either, because… well… you tell us. He’s 34 and certainly won’t be around when (and if) the Canucks matter again. You need all the spins you can get to find pieces that will be. Surely some team out there thinks he can provide third line scoring for a second or third round pick.

Benning did draft Virtanen and Boeser, so it hasn’t all been a balls-up. Though Nylander, Ehlers, Fiala, and Larkin all went directly after Virtanen. You just keep wondering how long the Canucks can keep running in place.

Benning will have a decision to make this summer when the Sedins decide to retire or not. If they want to keep playing and can be had cheaply, it won’t cost the Canucks anything to keep them around. They’re two years from competing at least. Virtanen and Stecher are the only RFAs who matter. But they should already be planning for space for Boeser in the summer of ’19.

Middling vets won’t get them there.