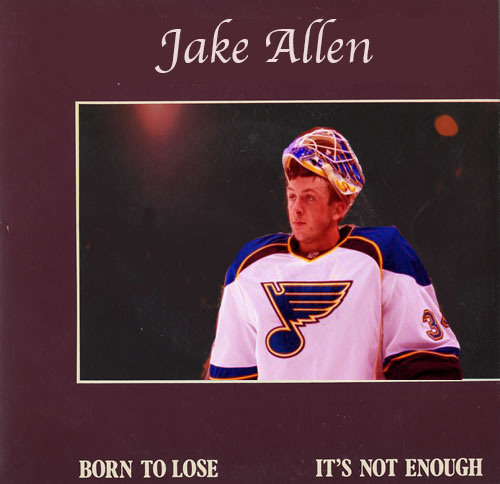 Those are the playoff save-percentages of the last eight Cup-winning goaltenders. The only outlier there is Jonathan Quick‘s 2014 run, which was buffeted by an offense that went Human Torch in the playoffs, thanks to Anze Kopitar, Jeff Carter, Tyler Toffoli, Justin Williams, and Marian Gaborik. So to get to a Cup, the buy-in for a goalie is just about .922.

Jake Allen‘s career playoff SV% is .922. So you might be a pleasant person, with inclinations of optimism (in which case, what are you doing here?), and say, “Well, that’s at the very bottom rung, but it’s at the table. The Blues could do it with this guy!” Well congratulations, you’re the Blues GM now.

Dig a little deeper, and you’ll see the problem. That .922 is buffeted by one series, in 2017 against the decidedly punchless Minnesota Wild. Allen threw a .956 at Minnesota over five games, winning that series pretty much by himself, and condemning Bruce Boudreau to another sweaty, Klondike-filled summer turning more read than he normally is.

But after that, when the Blues came up against an actual offense in Nashville, Allen was hurled back to Earth with impolite speed with a .909 over six games. Which aligns nicely with his .897 in 2016 as he and Brian Elliot played Hide The Pickle in the crease, or his .904 the year before as he hilariously threw up a kitten against that same Wild, including a real tour-da-fuck? in Game 6 of that series. Take away that one series, and Allen’s playoff SV% is .904.

Now let’s throw in the little nugget that Allen has exactly one regular season of a save-percentage over league-average. Would you, a rational human being with passable knowledge of how the game works, turn over your starting goalie job to him yet again?

Let’s pull back. Would you, a rational human being with a passable knowledge of how the game works, make the ultra-aggressive moves of signing Tyler Bozak to a free agent contract at age 32, and then give up a good deal of draft picks–signaling the future doesn’t mean much to you–to acquire Ryan O’Reilly, indicating you expect to not only make the playoffs this year but go far, and then turn the most important aspect over to Jake Allen?

No, you’re not crazy or masochistic or have fallen down the rabbit hole into Wonderland where you’re currently chasing around the Mad Hatter with a tire iron because seriously, fuck that guy.

And yet here we are with the Blues, once again. You may not think the additions of O’Reilly and Bozak puts them over the top. It probably doesn’t unless they get unexpected contributions from a few kids in the lineup. But you don’t make them thinking you’re just going to settle for third place and a first-round exit, either. Short of somehow convincing John Tavares that St. Louis was in Ontario (and feel free to take it, Ontario), this was about as much as the Blues could do to get in the ring with the Jets and Predators.

But what does it matter if the anchor is made of cardboard? Anyone think Allen is going to be able to stonewall either the Jets or Preds in the first round, the most likely opponents? The Blues would either have to win the division to avoid either to lead off the spring, or someone engineer a wild card spot that gets flipped over to the Pacific, where only San Jose or Vegas would probably be worrying. And you don’t commit yourself to $12.5 million worth of new centers to aim for a wild card spot.

Sure, the renovations to the rest of the house look great. Do they really matter if the foundation is causing the whole thing to lean to one side?