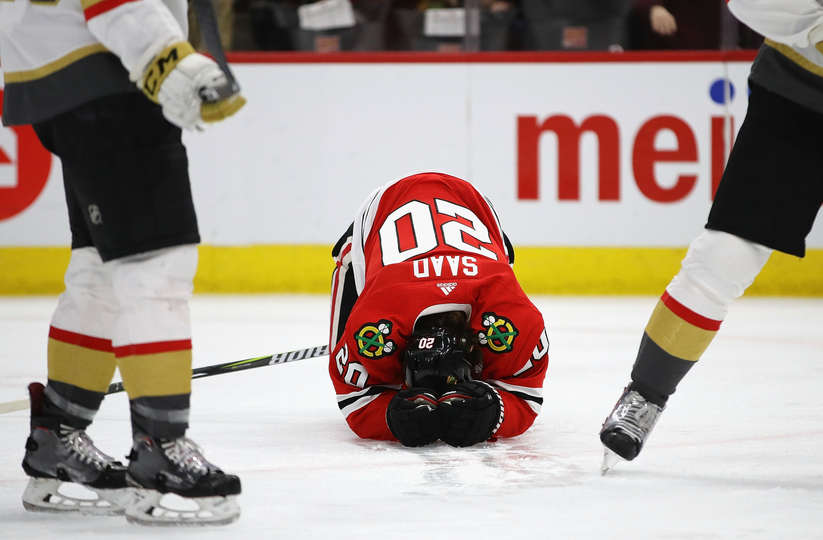 Vegas pulls a Kano on the Hawks, throwing knives and ripping hearts out. It’s gonna be a long, cold winter.  To the bullets.

– Certainly not one for Carl Dahlstrom’s highlight reel. You can easily blame him for all of Vegas’s last three goals, including the one where Shea Theodore pissed his entire name, including his fucking Confirmation name, in Dahlstrom’s snow. On Vegas’s goal at the end of the second, Dahlstrom confusingly backed off of Carpenter coming down the boards, giving Carpenter just enough room past the near-side dot to snipe the gloveside corner. On the game-tying goal, Dahlstrom was on the completely wrong side, forcing Murphy to try to over everything. Then on the OT goal, Dahlstrom was either flatfooted for simply too slow to keep up with Theodore, and the puck went off Dahlstrom’s stick through Delia’s five hole.

Dahlstrom and Murphy haven’t looked great together lately, and the reason is clear: Dahlstrom had his flash in the pan, and now he’s going back to the milquetoast Jared Dunn lookalike we always knew and were indifferent toward.

– On the plus side, Connor Murphy did look good for most of the game. Aside from a weak holding call in the second, he gummed up several chances from Vegas, especially in the third. Wouldn’t be surprised to see him line up next to Davidson or Koekkoek on Monday.

– Collin Delia once again did the best he could with what he was given. Vegas’s first goal is partially on him though. After stopping Nate Schmidt’s shot from the blue line, Delia failed to cover the puck even though he had his glove hovering over it like someone who has “Hooters photo op” circled on his calendar. Combined with Jokiharju getting pushed aside like the 19-year-old he is by Alex Tuch, it gave Tuch all the time he needed to post his 16th of the year. Hard to be mad about his performance otherwise.

– As Fels keeps saying, the Brain Trust and Coach Cool Youth Pastor are eventually going to have to tell Seabrook “It’s not us, it’s you.” Putting Jokiharju on his off side to accommodate Porkins isn’t going to help Harju’s development in any way, shape, or form, and it should not be considered again after tonight. Jokiharju had a 36+ CF% next to Seabrook and was often overmatched in his own zone. Asking him to cover for Fatso while on his off side is simply asking too much. If they’re going to fluff Seabrook for everything he’s done for them in the past, they should do it with someone like Murphy, who’s proven he’s up to the task. Having Harju with Seabrook is doing to destroy his development.

– On the plus side, Alex DeBrincat is now the one doing the fucking. His game-opening goal was an absolute masterpiece, and if you don’t believe me, just look:

He managed to tip Kahun’s shot out of mid-air and disrupt Flower’s timing on the stick sweep, then reached out as far as his 5’6” frame would let him and backhanded the puck in. You could hang that in the Louvre and it wouldn’t be out of place.

Then, he and Garbage Dick did what they’ve been doing on the power play. Kane drew everyone to him, leaving DeBrincat so embarrassingly open that Foley made the call before the shot came off his stick. The next time someone says RE-SIGN PANARIN, after you’re finished telling them to fuck off, show them the clip of that goal and ask “Why?” The Hawks have a younger, cheaper, more defensively responsible version of Panarin on the team right this second. As I am wont to say, thank fuck he’s 5’6”.

– Even though Kane’s original goal got called off because of Saad’s offside, there was a lot to like about everything that led up to that. First, Gustafsson made a crisp pass to Saad at the Hawks blue line, and then Saad kicked it out to Kane. Kane made just one too many hesitation moves for Saad to stay onside, which is something that wouldn’t happen if, you know, Saad were playing next to Kane regularly instead of the gigantic, useless obelisk that is Artem Anisimov. There was a nice fluidity to everything outside of the offside, and it’s something Colliton should look into.

– Because seriously, Artem Anisimov sucks. I challenge anyone to show me what he brings to this Blackhawks squad aside from the mental vision of a comically and barbarically large dick swinging like the pendulum of a clock that makes too much noise and can’t keep time. He makes plate tectonics look like something a premature ejaculator would critique as too fast. He took a hooking penalty late in the first, forcing the Hawks’s completely horseshit penalty kill to do what it has proven time and again it can’t do (they did kill the penalty, so hooray?). He contributed absolutely nothing. Dylan Strome does all the things he’s supposed to do, except better and for less money. If you can trade Manning and Rutta, you can trade Anisimov.

– If Erik Gustafsson ever decides to even feign defensive responsibility, he can be something special. His assist on Kane’s goal gave him an assist in eight straight games, something that hasn’t been done since Keith in 2013. He’s catching up to Chelios and Pilote in that little stat race, and while no one will ever mistake him for Chelios or Pilote, there is something there.

– Colliton opted to go with Kruger over Strome in the last seven minutes. Colliton is obviously a bright dude, but sometimes, you can’t help but wonder how much smarter he’d look if he’d stop trying to show us how big his galaxy brain is. You can argue that Strome had a team worst 25 CF%, but no one on the Hawks managed to crack 44% on the night. In that context, you can’t tell me Kruger centering Kane over Strome is a good idea.

The Hawks would have been lucky to win this one because they were so thoroughly thrashed throughout the night. But hey, it wouldn’t be Vegas if they let you come out with your shoes.

Line of the Night: “Was that John Scott?” – Eddie O., because John Scott is a gigantic joke whose presence you have to question at all times.