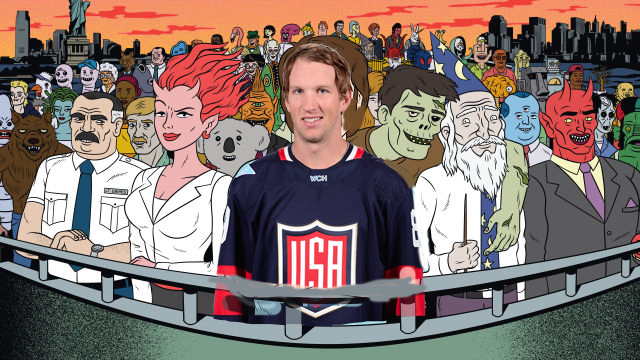 It’s hard to ignore the symbolism of Justin Abdelkader and how those who make decisions about hockey teams view him and the world. Abdelkader is a find hockey player. But that’s about it. “Fine.” He can man your third line, give you 10-15 goals, and get you out of a week or two on your second line if you have to have him do that. If you ask any more of him, or even worse pay him to do more, then you sir are mistaken and quite likely a moron.

Abdelkader was able to convince Ken Holland to give him an extension until after The Fallout for $4.2 million per year. Why? One, because Abdelkader had a career year with 23 goals at the time of negotiations, which is when you need your GM to be at his most shrewd. Second, Ken Holland also values things that just don’t make any sense. Yes, Abdelkader likes to yap, and he likes to get involved after whistles, and show a lot of GRITHEARTFAAAAARTTTT. These are not things you should want to pay extra for, when any tomato can in the AHL can give you those.

Worse yet, these were things valued by USA Hockey for last year’s World Cup and probably going forward. And thus the US got totally pantsed at said tournament, because while they were busy yakking and putting on an angry face other teams were just skating by them.

But teams don’t get punished as harshly for this dumb thinking because too many other teams think like that. The Wings won’t be quite so lucky, as the exorbitant wages Abdelkader is getting could cost them Athanasiou or Mantha in the summer when their cap space dries up.

But this is a place where we always value the wrong thing and pay too much for it. In that sense, Abdelkader is the perfect American hockey player.