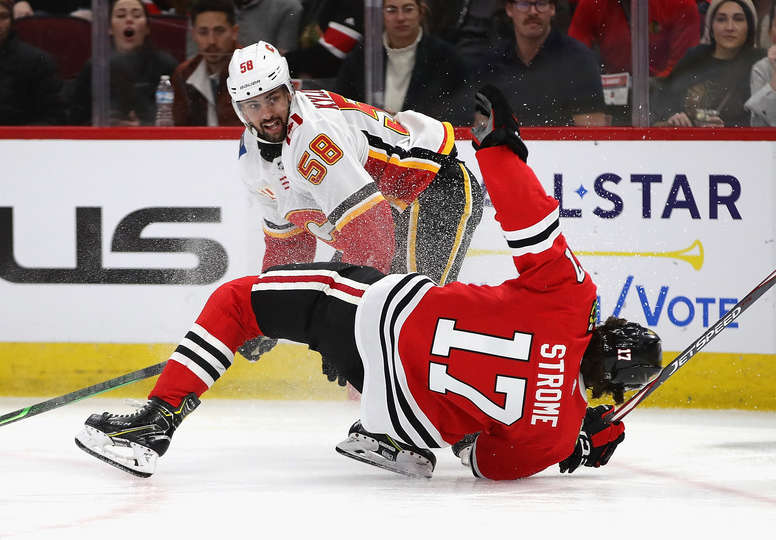 What a perfect microcosm of the 2019–20 Blackhawks. An early lead generated by (what better be) the New Core followed by 40 minutes of pants shitting, entirely avoidable penalties, and a flat refusal to shoot the puck while trailing. We’d love to know if this is an example of what Bowman called Colliton’s “great approach to things,” because losing to teams directly ahead of his in the wild card standings seems to be his approach. There’s a cheesy gordida crunch waiting for me, so let’s.

– This was the most dominant game Adam Boqvist has played thus far. His first period was astoundingly strong: a primary assist, a 66+ CF%, an 82+ xGF%, two shot attempts, a ton of ice time, and—the cherry on top—two excellent defensive plays. Let’s start there.

About mid-way through the first, the Flames’s fourth line had just finished a strong shift. After a shift change, Jonathan Hockey ended up with the puck behind the net. Boqvist shadowed him from behind the net up around the far boards and never let Gaudreau shake him. In fact, Boqvist nearly caused Jonathan Hockey to cough the puck up. Boqvist is precisely the kind of defenseman the Hawks would need to run Colliton’s man system. He showed quickness and strong positioning on this play.

Not too long after this sequence, Boqvist got to show off his defense again. Following a terrible cross-ice pass attempt by Keith that was easily intercepted, Boqvist picked up Monahan one-on-one and prevented a shot. These are the kinds of things everyone has worried about with Boqvist, and he showed that he can hold his own.

You can safely assume that the good defensive plays were a result of his obvious confidence with the puck tonight. He had two shot attempts early in the first and finished with at least five by my count in addition to one official shot on goal. We got to see that wicked wrister on Kubalik’s tip, which was as powerful as advertised.

Boqvist finished the game with the most TOI, the best CF%, and the best xGF% of Hawks players with more than 10 minutes of ice time at 5v5. A statement game for him if there ever was one.

– Corey Crawford would be your second star after Boqvist tonight. He played a big part in the Hawks killing off their second 5-on-3 of the night, with two huge saves to keep it close. You can probably argue that he should have had Lindholm’s second goal, but other than that, it was another good start for the least respected athlete in Chicago sports history. Killing off two 5-on-3s and posting a .929 should get you a win every day. Alas.

– It’s painfully ironic how the Hawks’s PK manages to be pretty good despite the fact that their defense is forbidden by the Geneva Convention. But you can thank Jonathan Toews for the Hawks’s first 5-on-3 kill. After losing a faceoff in his own zone to start it, it was Toews alone who managed to clear the puck from his own zone twice in a row. He may only be able to do one or the other, and tonight he chose defense (though he had a few offensive flashes late), which was a treat.

– Dylan Strome has a right ankle injury. No word yet on the severity, but it looked kind of like Saad’s. If he misses any extended time, the Hawks intermittently woeful offensive will be much more consistently awful.

– It’s really confidence inspiring when John Quenneville appears on the power play over Alex Nylander. Not that anyone wants Nylander on the ice at all, but it’s a true testament to the Hawks’s “No Plan, All Process” approach to . . . whatever it is they’re approaching here (a third straight year of no playoffs, most likely).

– I’ll stop bitching and moaning about it when the mouthpieces for the Hawks stop doing it: Pat Foley’s unmitigated slobbering over Marc Crawford prior to the third period was gross. I truly like how Marc Crawford has handled himself after being revealed as a gigantic shithead in his past. He apologized, reached out to many of the players he wronged, got therapy long before his shitheadedness became public, and has been contrite about his situation. Having Pat Foley Cheshire grin his way through calling Crawford “a great guy” is so perfectly in tune for this tone-deaf organization, and yet, I can’t help but be surprised by the awfulness. Crawford went out of his way to call his second chance a privilege, and kudos to him for that, but Foley should fucking know better. Righting a ton of huge wrongs doesn’t make you a “great guy.” It just makes you less of a shithead.

But it didn’t stop there. Foley then proceeded to cite Dennis Gilbert (just can’t get away from this fucker, can we?) and Kirby Dach as guys who stated that they love Crawford while completely disregarding the proven and constantly unearthed power gap between players and coaches. They can love Crawford all they want. That doesn’t serve as adequate evidence to support Foley’s “neener neener, he’s actually a great guy” horseshit. It’s getting awfully old. I want Marc Crawford to keep getting better and succeed. I don’t want to hear Pat Foley use his pulpit to try and speed that along just because he doesn’t get it. It’s Foley’s literal job to represent the Blackhawks well, and he did a terrible job of it tonight, much like his bosses that one summer at Notre Dame. I digress.

The Hawks are a mediocre team whose stars can occasionally put them over the top against better teams taking the night off and Detroit. When the chips are down, like they were tonight, they hermit crab. But hey, Bowman thinks Colliton’s approach is great, what with yet another too many men penalty and six fucking shots on goal during crunch time.