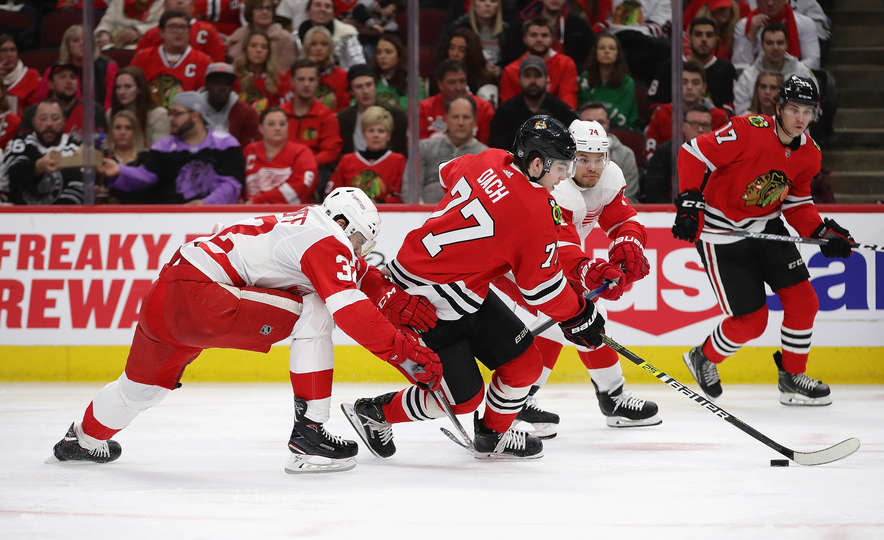 Even in the midst of a shitty Hawks season and an even shittier Red Wings season (not that those are anything new in those parts), it still feels nice to watch the Hawks get a nice win over that trash heap franchise from that trash heap city. I just wish this win hadn’t felt so… itchy. Let’s get into it:

so do the Hawks, just a little less

-As good as the win over the Wings felt, it took the Blackhawks way too damn long to realize that they were playing an AHL team, and react accordingly. They were straight up asleep for the first period and a decent bit of the second period as well – despite having 55% of the shot attempts, they still lost the scoring chance battle 9-6 and the high danger chance battle 3-1 in the first. While they started playing in the second period, it wasn’t until they were able to quickly strike back-to-back goals with just shy of five minutes left in that frame that it really felt like the Hawks came to life. Not the most encouraging  play against an opponent like this, but in the end getting the win is still much better than it would’ve looked had they lost to this Detroit group, so I won’t bitch too much.

– Alex DeBrincat was a gosh darned force tonight, with straight up dominant metrics across the board. He posted a 68.75 CF%, 70 FF%, 71.6 xGF%, and a 55.56 SCF% (scoring chances for). He also made two great plays in the leadup to Strome’s opening goal for the Hawks, first to get the puck of the Hawks’ defensive zone onto the rush, then winning the puck off the boards behind the net and then feed Strome in the slot. The results have unfortunately not always been there for Top Cat this year, but he’s been playing solid so if he keeps up more games like this (easier said than done) he will start to see the production rise.

– Congratulations to Dylan Sikura on his first NHL goal. It only took him more than half a regular season’s worth of games to get it.

I kid, I kid. Sikura hasn’t exactly bloomed in the way that I think many of us would have preferred He didn’t get a ton of ice time tonight (just 9:39 at evens) but made the most of it with a nice 56.25 CF% and adding that goal. Just build off of it moving forward and please don’t make us wait another 43 games for the next one.

– Adam Boqvist fucks. He is so offensively skilled and creative, he just needs to tap more into those abilities both as a PP QB and at 5v5 play. He has all of the tools to be a true force and produce at a 1D level in the NHL. His goal tonight was a thing of pure beauty and I look forward to many more like it coming.

– It cannot be overstated – God Bless Corey Crawford. While the team was figuring their shit out tonight, Crow was solid and kept them much more in it than they should’ve been for a while, including an awesome series of saves after a really rough play in front of the net by Duncan Keith. May Crow live on in our hearts forever.

– Blackhawks go next on Tuesday against the Flames.