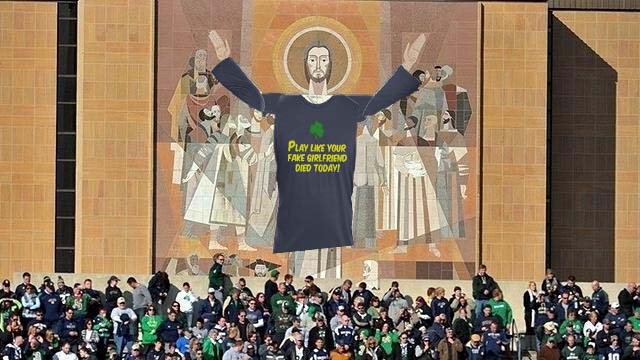 The NHL decided it wanted to place its signature regular season game in a famous, hallowed college football stadium to draw in viewers.

Too bad they missed.

While any Notre Dame fan, between huffs of paint, won’t hesitate to tell you how much the Golden Dome means to football, society, and the world, you have to ask yourself other than alums and the occasional Chicago meatball, who does Notre Dame matter to? Because it certainly isn’t due to results of the past three decades.

Every so often, Notre Dame is able to manipulate its hand-picked schedule into a record that appears good, and more importantly the school and fanbase and NBC stamp their feet, close their eyes, and yell as loud as they can that they must be taken seriously and given a bowl or a playoff spot. And probably out of sheer exhaustion of listening to them, they’re given one. And they get the eight kinds of shit kicked out of them every single time. They’re second class. They’re a history lesson. They’re a mid-major with a television deal and faux-religious piety.

Notre Dame doesn’t join a conference to adhere to some history or because they think they’re above the rest of college football. They do it because they know it would kill off any notoriety they get. If they were in the Big 10, they’d be Iowa. If they were in the Big 12, they’d be Colorado. If they joined their basketball brethren in the ACC they’d be Pitt. No one would care. Barely anyone cares now. Every SEC school would suck their eyeballs out through their anus and fuck the brain hole.

That’s why they’re an also-ran with a shiny gloss. Star recruits now have never known Notre Dame as being anything, and they certainly don’t want to spend anytime in Bumfuck, Indiana. Fuck, their fathers don’t remember Notre Dame being anything worth talking about! They want championship games and NFL exposure you get in the SEC or Big 10, not beating up BYU in the middle of the afternoon on NBC. Who gives a flying fuck?

Notre Dame hasn’t mattered since the 80s. INXS has more hits after that decade than the Irish do. They’re an anachronism. And then we say the names of Lizzy Seeberg or Declan Sullivan, and it’s not just that they’re overblown or incompetent, it’s a downright evil institution. Fuck your touchdown Jesus into death. And then they pile their religious bullshit on top to give them even more piousness even though if it wasn’t for their quickly fading football glory no one would ever go to that school without being forced. It would be a prison camp like the rest of that godforsaken state.

Then again, maybe it’s perfect that the Hawks want to stage the only game they’ll play that anyone will care about there. There are some similarities.