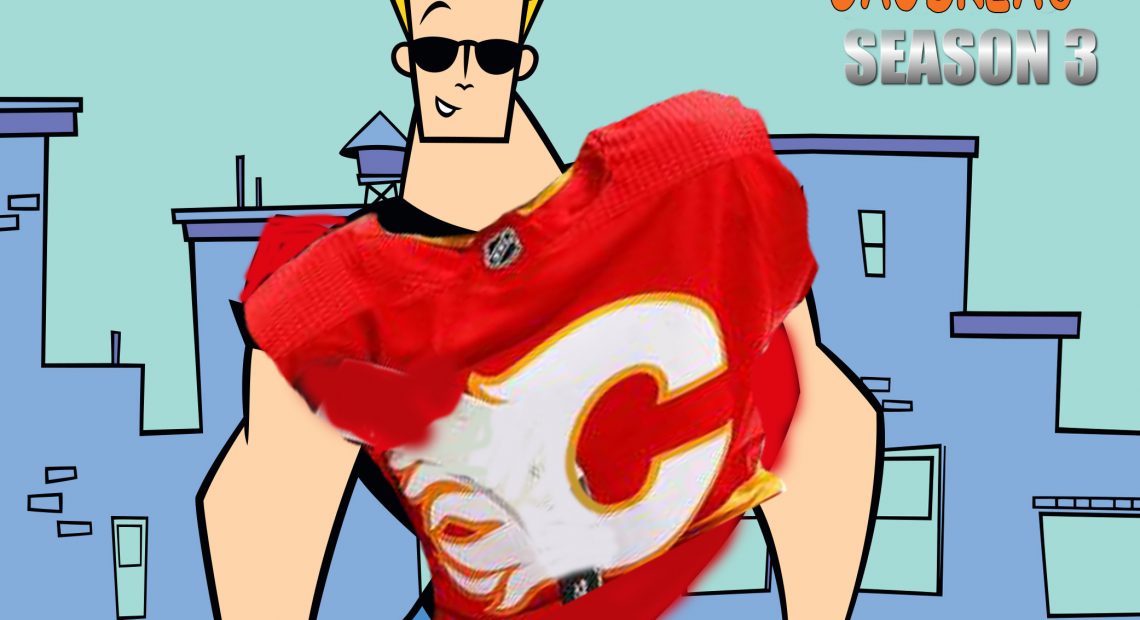 It’s been a stuttering season for the Flames, who only recently rejoined the playoff spots in the Pacific when that should have been an automatic before the season. They also had to deal with the little side-story of their coach turning out to be a racist gasbag and moving on from him in the middle of the season and suddenly. And that’s certainly helped them.

But this team has had trouble scoring, and a big reason is their first line just hasn’t been very good so far this year. And that starts with Johnny Gaudreau.

Playing Calgary doesn’t lend itself to immense popularity or awareness, given that it’s where Canada goes to ranch and shovel horseshit. So you might not realize that Gaudreau put up 99 points for the team that did amass the most points in the West last year. That came after he racked up 84 the season before, and established himself as the main scoring threat for what was considered a young and exciting team ready to establish itself around the championship picture for a bit.

Hasn’t been nearly as rosy this year. Johnny Hockey only has 30 points in 41 games, and metrically it’s a much uglier picture. He and running buddy Sean Monahan have been getting run over possession-wise all season, with a 45.9 xG% and an in-the-red Corsi number. They used to regularly be in the mid-50s in both categories once they started playing together.

Individually, Monahan has seen drops across the board. His shots are down from the past two seasons per game, as are his attempts. The tempting thing to do is to point to the cratered SH% and blame that for all his scoring woes, but it’s not that simple. Gaudreau simply isn’t getting the chances he used to. His expected-goal individually is down, and his scoring-chances and high-danger scoring-chances per game are way down. Quite simple, Gaudreau isn’t getting anywhere near the net.

Gaudreau is also taking far more penalties than before and not generating as many takeaways. Some of this is a product of not having the puck as much. But it also suggests a player who’s not working as hard as he used to. Gaudreau’s outrageous skill-level will cover a multitude of sins, and he can look like he’s taking it easy out there when it is just that easy for him. But this has gone a little beyond that, and it hasn’t abated with the coaching change.

There were even whispers in the Calgary media earlier in the year about the Flames seeing what the market would be for Gaudreau, which is probably patently ridiculous. This is an elite-level scorer at just 26 and signed for a reasonable $6.7M for the next two years, given that he can give you 90 points in a season or more. But still, something is off here.

The Flames have too many pieces in place to consider moving Gaudreau, which would constitute something of a restructuring. The defense is a touch old and Rasmus Andersson or Oliver Kylington haven’t really shown they’re going to take over for Mark Giordano as he declines, and maybe that’s the fear. Maybe it’s just one of those year. But Gaudreau is the type of player you’d struggle to ever get equal value for in a trade, especially with that contract.

Gaudreau can start a turnaround by getting to the middle of the ice more instead of his current Getzlaf-impression. The Flames hold the last wildcard spot and you’d think they’re going to have to fight off the Preds for it, as well as some others. But the Coyotes should make for easy catching, as well as the Oilers in their own division. They can do that if Johnny Hockey comes back, instead of this Johnny Floaty that he’s been.