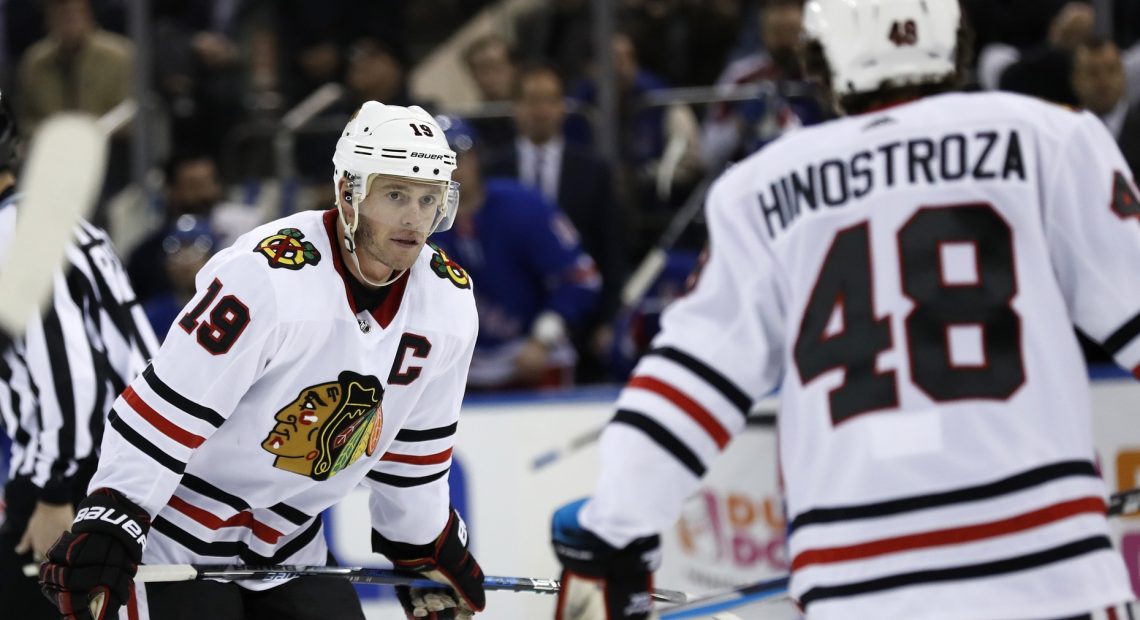 This year is only three days old but it’s basically been one big dick kick for most of those 72 hours. One merciful exception is the Blackhawks winning a game—and in regulation too. It wasn’t always pretty, despite the fact that the Rangers blow in possession which played to the Hawks’ strength. The score makes it seem easier than it was. To the bullets:

– The theme of the night for the Hawks was dumb penalties. Sure, their PK is good, but jesus do you have to make it so hard on yourselves? Toews had two penalties in the first, Seabrook and Glass tag teamed in the second to allow the Rangers a 5-on-3 on which they promptly tied the game, Bouma took a dumbshit penalty late in the second in the offensive zone—it just wouldn’t stop. It also must be pointed out that Glass made pretty much the stupidest mistake possible by lofting the puck into the stands while they were already on the PK. And I had to concede that Dave Lozo made a funny when he called him Jeff “I shoot the puck over the” Glass. In any case, penalties let the Rangers tie the game in the second and nearly again in the third. Penalties like the too many men in the third, or delay of game in the second (and which Seabrook nearly managed in the first as well), are often just dumbass moves. They certainly were tonight.

– And then there was the dumb non-call in the second period: Hartman’s cross-check on Marc Staal that sent Staal hurtling into the net while taking the puck with him. Not that I’m unhappy with the result, of course. We need all the help we can get right now.

– If a line was going to get lucky, it had to be Hartman-Schmaltz-Kane. They were the best line all night with all three of them hovering around a 70 CF%. All of them had multiple shots (three for Schmaltz, five for Kane, two for Hartman), and if it hadn’t been for Lundqvist robbing Kane repeatedly, it would have been a different story tonight.

– But no, it was largely the same scenario we’ve become used to: the Hawks dominated possession (64.6 CF% at evens, with the first two periods being over 70%), they had a huge lead in shots (35 to 25), yet they had to eke out goals until the last couple minutes when they got two empty-netters. Now, granted, I’m not looking this gift horse in the mouth (OK, maybe I am a little), and if this is how we have to claw our way to victory then fine, so be it. The Saad-Toews-Hinostroza thing was working. But if Kane and Schmaltz had had a little more finish on those shots, this could have been a DLR. But whatever. They did what needed to be done.

– Speaking of doing things the hard way, Jeff Glass did himself very few favors, such as the aforementioned dumb penalty, and his habit of losing his net (and occasionally his stick). His rebounds weren’t as atrocious tonight as previously, and he finished with a respectable .920 SV%. But I certainly wouldn’t call his positioning reliably good. The announcers (whoever the fuck this B-team was that the NHL trotted out for their beloved Rivalry Night along with noted asshat Pierre McGuire) kept fluffing him all night, but really they were just pushing this feel-good storyline. The scrambling in front of the net that the Hawks had to periodically resort to stands as a reminder that this isn’t a long-term solution during Crawford’s absence, or at least, it shouldn’t be.

– David Kampf got his first point, so way to go. It came as an assist on Patrick Sharp’s go-ahead goal, which is…good? I’m conflicted by Sharp getting to stay in the lineup and bump Top Cat to his off side, but again, that gift horse thing….

So despite the warts this was a badly needed win, as they all will be from here on out. This game really had the feel of one that would get tied late in the third, and which the Hawks would lose in OT, so I’d rather be sitting here complaining about how many more goals they could have scored, rather than bitching about them blowing it.

Line of the Night: “Chicago…way too many men.” –Pierre McGuire in a most Freudian-sounding statement.