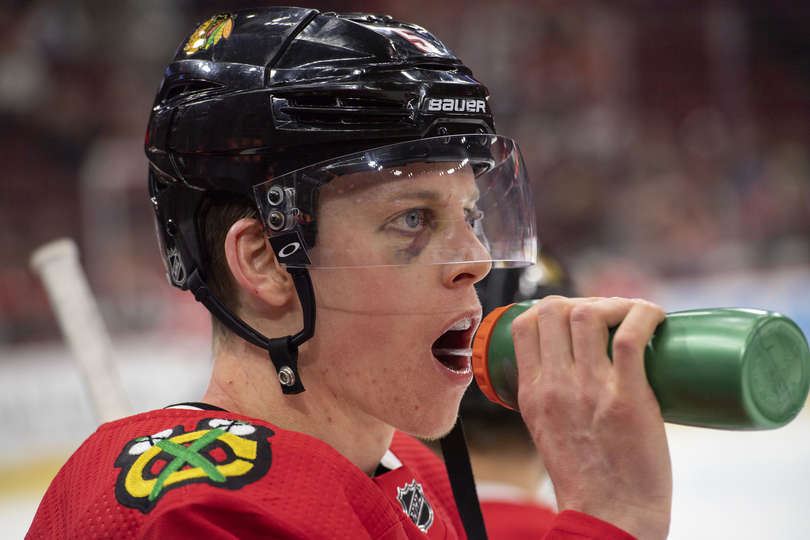 One of the worst shows I have ever seen live was Beirut at the Aragon in, like, 2011–12. I showed up for the first half hour, got bored, and left. It’s no wonder this game felt so familiar, because that’s the exact tack the Hawks took with this eminently winnable game tonight. After a hot start, the Hawks got buried by their own incompetence, which is just another way of saying business as usual. Let’s do this quickly: We’ve all got Feats of Strength to finish, I’m sure.

– Coming into this game on a three-game winning streak and fresh off Collin Delia’s stoning of the most dangerous line in hockey, Jeremy Colliton decided to ride the Cam Ward wave. This is some true Galaxy Brain shit. On the one hand, complaining about Ward getting the start tonight probably has a bit of looking a gift horse in the mouth to it. Coming into this game, he had a .949 SV%. On the other, those two games came against a floundering and hurt Preds and an even more hurt Dallas team. Also, in case Ward spasming a couple good games had made you forget, Cam Ward is really a used-car-lot wavy-arm guy who moonlights as a goaltender.

Ward should have been pulled after the first goal. For reasons that can only be deciphered by true Brain Geniouses, Cam Ward came out to challenge Hawryluk after Hawryluk overpowered Dahlstrom/Dahlstrom lost his edge. Except after getting about halfway out, Ward flinched and tried to go back, leaving Hawryluk—a guy who has never scored an NHL goal—a yawning net to shoot at. I don’t have adequate words to describe what a shitshow this goal was because there’s no excuse for a 1,000-year veteran to do what Ward did. You wouldn’t see that in a fucking beer league—as Scott Foster once showed us—and yet, here we are.

Then, as if to retroactively adjust to completely losing his ass and crease on the first goal, Cam Ward turtled into the net on Hawryluk’s second goal. Huberdeau’s stretch pass between Keith and Gustafsson was art, and those two probably share part of the blame, but at no point did Ward look like an NHL goaltender on this attempt.

The third goal was more on Forsling than anyone—as Forsling totally froze as Hoffman stepped up after Toews pressured Weegar up top, giving Hoffman too much time to pick his spot, which happened to be the back of the net via Forsling’s groin—but that fourth goal was the result of a rebound that would have made Dennis Rodman blush. And the fifth goal, because fifth goals are things we talk about when Cam Ward starts, was a simple short-side snipe that an NHL-caliber goalie probably puts some leather on. But alas, Cam Ward is not an NHL-caliber goalie.

– Dylan Strome is officially good. You can mark it down. His assist on Our Large Irish Son’s first goal of the year was a clinic in vision and patience. After stealing the puck at the offensive blue line, Strome set up behind the net off a Perlini pass, waiting for help. Murphy crashed, Strome fed him, and the rest is history. But the patience and nerve Strome showed behind the net was otherworldly. Strome had another steal around the same spot in the second, which led to two high-quality chances from Kane. He capped his night off with a goal off a Kane pass. Strome was the most impressive forward of the night, and it looks like the Hawks really have their #2 center in him.

– Our Sweet Boy Connor Murphy also had himself a night. You saw the goal he scored, which was a testament to his positioning and sneaky good wrister. Murphy played a big role in the Hawks’s third goal, leading the rush off a good Forsling outlet pass and grabbing the secondary assist on Strome’s goal. He also led the Hawks in even-strength TOI, led all Hawks D-men with a 51+ CF% at 5v5, and did it mostly against the Huberdeau–Barkov–Dadonov line. On top of all that, Murphy looked much more comfortable with the puck in his exits, which was a weak point in his game last year. Between Strome and Murphy, there’s a lot to hope for regarding the future.

– Here’s your gamely “Alex DeBrincat is not a third liner” alert. His goal was a bit flukey, as he was trying to pass to Kane through the slot and had the good fortune of sweeping in a pinballing puck, but a goal’s a goal. As much as we’d like to see him flip with Anisimov, he’s still making shit work where he’s at.

– Regardless of what Colliton ends up being, it looks like he might go down as the guy who fixed the power play. The top unit of Gus at QB; Strome in front; and Top Cat, Toews, Kane across has looked legitimately dangerous when it’s out there and Gus and Kane can be bothered to give a shit. It scored again due to Toews’s roving and retrieval and the movement Kane, Gus, and Top Cat show up top. It’s probably way too early to pronounce the PP truly fixed, but when’s the last time you looked forward to the PP?

– Just a quick reminder that Cam Ward sucks and we could have had Delia in net, who likely stops at least three of the five Ward allowed tonight.

– Dylan Sikura and Brendan Perlini led all Hawks in CF% tonight, with shares above 70. Perlini is going to be frustrating, as he’s big, fast, and has no finish, as evidenced again tonight with his janking of a shot toward a wide-open net early in the Hawks’s first PP. Sikura’s no savior, but he’s good on the third line.

– Carl Dahlstrom ended up in Coach Cool Youth Pastor’s doghouse tonight, spending the latter part of the game with Seabrook. You can maybe partially blame him for the first goal. But other than that, I’m not sure what else he did noticeably poorly. He and Murphy didn’t have the best game together, as Murphy’s peripherals spiked away from Dahlstrom, but I’m not sure what triggered Colliton to switch them up.

– Saad and Toews looked good in the first, then got completely horsed for the rest of the game. Erik Gustafsson also flashed evidence that he has a Give-a-Shit meter, and it was hovering around zero for the last two periods.  You can trace much of the loss to these facts, along with the fact that Cam Ward blows.

It wasn’t all bad, but it certainly wasn’t good. The Hawks will get a few days off before welcoming the Minnesota Mild to the UC on Thursday. Until then, stay toasty and toasted. Merry Whatever You Celebrate.

Line of the Night: “It’s tough waking up and seeing how ugly I am now. I knew I didn’t have the looks before, but this doesn’t help.” –Connor Murphy explaining to Steve Konroyd how he felt after the Tyler Pitlick elbow.