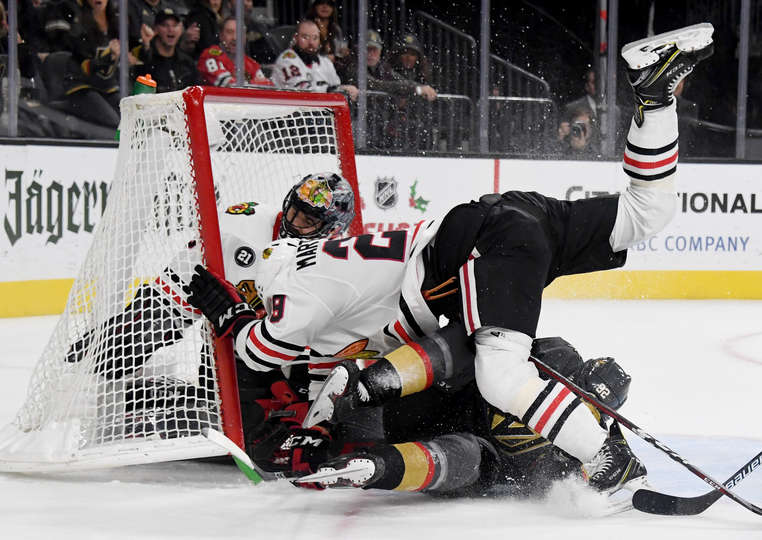 This game was Laura Powers ripping Bart’s heart out and kicking it into the trash. After taking the lead for the first time in nine games, the Hawks gave up two goals in 12 fucking seconds. Up until that point, the Hawks were playing well! Aside from spotting the Knights their requisite two goals early, the Hawks dominated possession until the third. Whatever, let’s fucking do this already.

– Let’s just get the shit out of the way. Brent Seabrook can retire now and have a wonderful legacy. He’s done so very, very much for this team, and the greatest thing he can do now is just stop. Just hang them up, take the assistant coach position from actual goblin Barry Smith, and go down in history.

Seabrook’s turnover on the game-winning goal for Vegas was one thing. But watching Alex Tuch bowl through him and jam the dagger into everyone’s fucking skull is utterly embarrassing. We can complain that Patches interfered, and I don’t think we’d be wrong. But regardless, Tuch manhandling Seabrook was the perfect microcosm of what this team has become: bloated, behind, and thrashing in a sea of shit.

As much as I want to get completely red and nude about what Brent Seabrook is now, I just can’t. It’s like watching your 16-year-old dog, your lifelong companion, shit in the middle of the floor, only to hang his head in shame. He knows he shouldn’t do that, but he’s just so old. The anger melts into grief, which only makes you madder and sadder. What’s worse is you know no one else will take him in, and you just can’t bear putting him out to pasture. So you let him shit on the floor, over and over, just wishing the nightmare would end.

– Certainly not one of Crawford’s best either. It’s a given that he’s going to have to make outrageous saves every night, because this fucking team is an unwashed armpit crawling with impetigo. But the game-tying goal from Marchessault in the third is inexcusable. The dying emu off Engelland’s stick in the first was another one Crow probably should have had. Konroyd, who manages to be both an idiot and a Milhouse, kept saying it bounced off Toews, which is proof positive that it didn’t and Crow just missed it. Even the first goal he gave up was a result of poor rebound control, which gave Reilly Smith a chance to Baryshnikov his way to the game opener.

– I don’t know how many times we are going to have to say it, but Alex DeBrincat still isn’t a third liner. When you had Top Cat–Strome–Kane on the ice toward the end of the second, they were dominant. DeBrincat and Strome were toward the bottom in TOI in the first, which is inconceivable. I want to know what the grand conspiracy against DeBrincat is, because there’s no logical explanation for why Dominik Kahun or David Kampf get plush spots over him. You’d think the GREAT COMMUNICATOR would have this explanation front and center, and yet we wait and wonder.

– I tried being nice, but Brandon Manning can go right back to eating my toenails after a long, hot run. It’s one thing if, like, Erik Karlsson storms the blue line on the PK to try to force a turnover. But there was Brandon Manning, doing just that prior to Vegas’s first goal. In case anyone’s forgotten, Brandon Manning sucks so much he blows, and you could see Marchessault giggling as he shuffled a pass right past him, leaving Seabrook all alone to defend. I’d take Connor Murphy eight weeks ago over him.

– On the plus side, Jonathan Toews was a force. He scored his goal from behind the goal line. He won faceoff after faceoff late in the third in the offensive zone, giving the Hawks hope. He took everything and then some, and it still wasn’t enough.

– Dylan Strome could be something. For all the worrying we did about his supposed lack of speed, he’s almost always in the right place. You don’t expect him to pot shots like the bad angle one he did in the second with any regularity, but it’s nice to know that he’s got it in his bag of tricks. Imagine what he and DeBrincat could do with Kane on the wing.

– Patrick Kane was also dominant tonight, and he did it while playing more minutes than anyone on the Hawks. Though he spent most of his time with Kahun and Wide Dick, which is such a goddamn waste.

– Credit to Artie though. Forcing a turnover and giving the Hawks their first goddamn lead in nine motherfucking games was nice, even if it was fleeting.

– I want to know whose idea it’s been to continue doing the neutral zone/own zone drop pass, because I’m going to pull my brain out from my asshole and piss on it until it dissolves like a skidmark if it keeps happening. This skullfuck of a strategy led to sustained pressure for the Knights WHILE THE HAWKS HAD A MAN ADVANTAGE during the second PP in the second period. I know I shouldn’t yell about that, since the PP is worse than a Truth commercial, but did you ever think it could possibly get worse? Fire whoever is in charge of making that decision out of a cannon into the motherfucking sun.

It was right there for the Hawks, and they threw up in their shoes. With the insufferable game at Notre Dame against Boston coming up and the Hawks falling farther and farther down in the standings, don’t be surprised if the next few weeks are the swan song for Bowman and maybe even Colliton.

Line of the Night: “Artem Anisimov puts the Hawks ahead for the first time in nine games!” – Pat Foley