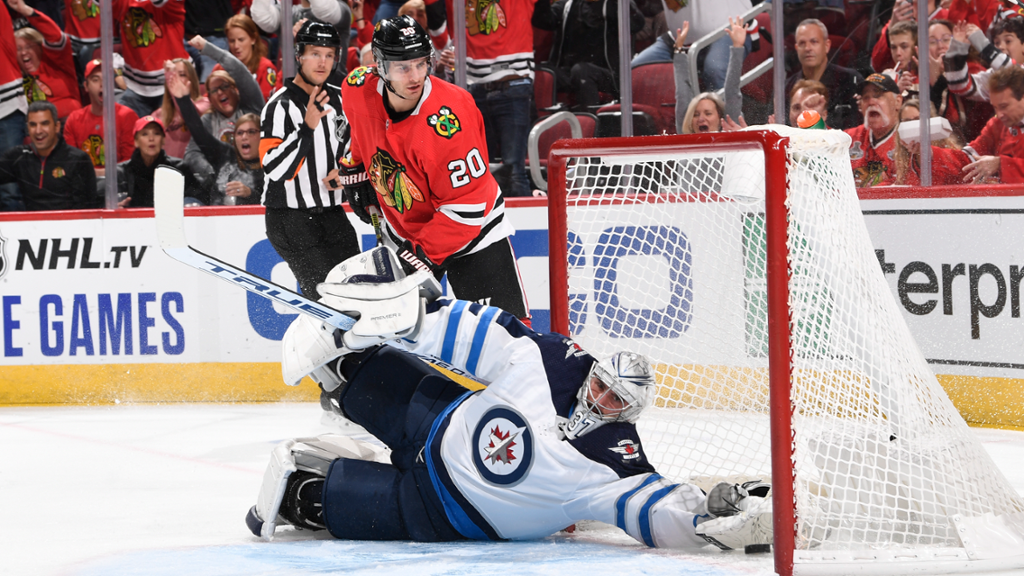 Well, it’s a point? When you don’t have any, a point is like, better than nothing? I’m trying here.

The Hawks started well, then got blitzed in the middle, and then spent the third period playing awfully safe. Which didn’t work. Stop me if you’ve heard all this before. Well you can’t now, because I’ve said it all, but you get the idea. What the Hawks can do about it, I’m not sure. And I’m not even sure it’s a thing, but the Hawks seem to think it’s a thing.

Anyway, let’s clean it up.

-Slo my colleague Matt McClure has said that this seven game homestand is an excellent time to really evaluate Jeremy Colliton. Because he’ll get seven games to pick his matchups and where he wants players and have the best chance to put his players in their best places to give the Hawks a chance to win. So far…ehhhhhh.

The Hawks definitely were matching up their D against certain lines of the Jets last night. Murphy and Keith drew the Scheifele line assignment. Seabrook and Maatta drew the Andrew Copp line. But the forwards didn’t really have any pattern like that, which is strange. Which means Scheifele got some shifts against David Kampf’s line, which didn’t work out all that well for the Jets. But then they got some shifts against the Dylan Strome line, which very much did. You can’t have Strome out there against top centers. It’s just not going to work right now.

-Whatever, that’s kind of nitpicking. Maybe Colliton is still figuring out who does what. What his team does though is still have massive defensive breakdowns in their own zone. And I don’t know if that’s mistakes or by design. Frequently, you’ll catch the Hawks with both d-men on the same side of the ice, and sometimes even in the same corner. Which just can’t be right. One of Lehner’s big saves on Scheifele came when Murphy tailed Wheeler behind the net all the way to the other circle, and Keith was on his post as he’s supposed to be. So who covers the other side? Is it Strome? Because no one did much of anything here:

For the tying goal, where are de Haan and Toews going exactly here?

These are obviously cherry-picked, but you see these things all the time. It still feels like guys are guessing where to be, or simply don’t care. This shouldn’t be happening this early in the season after MAGIC TRAINING CAMP.

-The Hawks made a big deal of struggling in the second period, as they did against San Jose. I’m not really sure this is a thing, but they seem to think it is. It could just be that San Jose and Winnipeg are that much better and just needed a period to wake up for a game on the road. Obviously, the only difference in the second is the long change, where the Hawks possession problems become exacerbated. It’s even harder for them to escape their zone, guys get stuck out longer, etc. I’m not sure it’s got that much to do with the second period itself.

-On the plus side, I’ve been surprised by Ryan Carpenter in the first three games, and he was excellent last night. The 4th line was actually the best for the Hawks in terms of attempts-share and second best in expected-goals. Carpenter is quick and just gets up the ice, which is how he created the shorthanded goal (the Jets defense being just about as slow as the Hawks’ didn’t hurt either). I think you could make an excellent checking unit out of him and Kampf to make room for Dach. Just sayin’.

-Rough night for Kampf’s line, as they get clocked in possession and chances. But it’s still unclear what they’re being set out to do. Yet, they’re still the only line that plays fast, i.e. just gets the puck and goes. That might be because Saad is the only winger other than Kane comfortable carrying the puck a long way (sometimes to his detriment), but the top two lines don’t play that way. Yet. They need to.

-Seen some people wondering if the Hawks are actually intentionally not clogging shooting lanes on the penalty kill. Ehlers goal was a touch strange:

Again, I can’t tell you if this is systematic or human error. Maatta is there, he knows where Ehlers is, I think, he seems to anticipate the pass to him, but he takes a weird angle, either wrongly trying to cut off the pass he’ll never get to or he thinks Ehlers is somewhere else. He’s certainly available to get in the lane for the shot. He just didn’t.

-Ok, so my first trip into the UC this season. That scoreboard is…let’s say garish? It’s not this weird screens on top of screens thing, so from certain angles, including mine, there are ads and graphics that get cut off by other screens. It kind of looks like he Pritzker Pavillon, but made of video screens. It’ll take some getting used to.