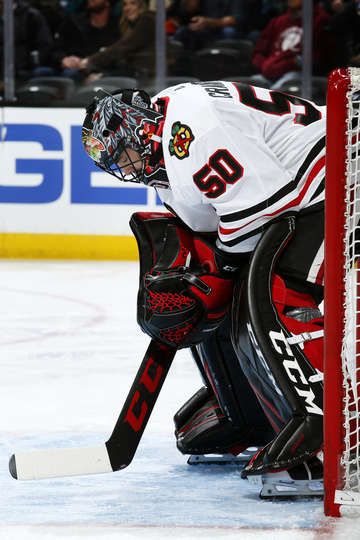 Call the Blackhawks what you want, but you have to admit they’re consistent. They once again found themselves down early, spasmed an effort in the second (which ironically saw them post a 35+ CF% against the second-worst possession team in the league), and got buried in the third. Swiss watches don’t keep better time than this script at this point. Watching the Hawks now has all the feel of finding a mole in your taint and deciding “Yes, I’m going to pick this out with my fingernails.” It’s gross and awful, and we’re not sure how we really got to this point, but we’re an inch and a half deep, so there’s no turning back. Let’s try to clean up the blood.

– We’ll start with some good, because there’s so little to be found. Erik Gustafsson’s goal was the beautiful result of vintage Patrick Kane and Duncan Keith. If you only just started watching Blackhawks hockey and saw that play, you’d wonder how this team’s record is such piss. Kane’s preternatural ice awareness let him swing a no-look pass through the slot to a wide-open Keith, and Keith’s shot fake led to a month-long ban on all jock strap sales to John Gibson at sporting goods stores nationwide.

– Gustafsson’s goal and later post are what make him such a nightmare to watch. You can see that there’s offensive potential, but you have to dig through an awfully deep pile of shit to get there. If the Hawks ever decide to admit that this isn’t a playoff team (which they should have done after firing Q), don’t be surprised to see Gus on the move. He can certainly find a spot on someone’s (read: Toronto’s) third pairing and bum slay. As much as I hate to admit it, he—like many of the Hawks’s peripheral players—is a toy.

– Don’t look now, but Brandon Manning has spasmed a Jordan Oesterle over the last few games. If you ignore the fact that he had a 27+ CF% (and you should, because I sure as shit am), you can probably argue that he was at least fine last night. Or at least in the first period. He created the mad scramble in front of the ice that led to Brandon Saad’s crossbar, then managed to follow up with a shot off Pontus Aberg after Aberg cleared the paint. He then drew a roughing penalty late in the first. These are the straws we are grasping at here, but if Manning can look at least competent for a stretch, some throbbing sack of toxic masculinity will trade a pick for him.

– Alex DeBrincat’s goal was a clinic in puck handling. After Jonathan Toews settled a turnover down, he delivered a pass almost directly into DeBrincat’s chest. DeBrincat not only settled that down but also flicked a shot past Gibson to tie the game. As is the refrain: Thank God he’s 5’7”.

– I have two fun facts for you. First, here’s a sampling of forwards who played more 5v5 time than DeBrincat last night: John Hayden, Dominik Kahun, Dylan Strome, David Kampf, Brendan Perlini, and Artem Anisimov. Second, and this fact is really fun, NONE OF THOSE FORWARDS SHOULD BE PLAYING MORE 5V5 TIME THAN ALEX DEBRINCAT. You can talk to me about how DeBrincat played four minutes on the PP and I will tell you to run headfirst up my asshole. There is simply no excuse for this no matter how you slice it.

If you are a massive brain genious who thinks that this team is still playoff hopeful, then you have to have your best pure shooter on the ice as much as possible, especially since the Hawks have scored exactly two goals per game over the last three games. If you think that it’s time to Lose for Hughes, then you want to see what your young crop can do, and wouldn’t you fucking know it, Alex DeBrincat still isn’t old enough to legally buy a drink.

I don’t know whether this is a Colliton decision (when approached by, I think it was Lazarus, about the fact that DeBrincat played only 46 seconds at 5v5 in the first, Colliton said “that’s not right,” as in he was refuting a fact) or Barry Smith and the front office telling Colliton what they want, but neither gives me the warm and fuzzies. And when you add the rumbling about bringing Artemi Panarin back to this weirdness, it gets even more frustrating, because DeBrincat does more than Panarin does, is younger, and doesn’t cost $10 million.

If you want to make a case for Top Cat playing with Strome, fine. But make those two, plus whichever unpainted sad clown you want to shove with them, your second line and be done with it. Alex DeBrincat is not and has never been a third fucking liner, and when even Coach Mr. Turner is treating him as such, you have to wonder if this is a decision being made by the HOCKEY MEN in the front office.

– And what the fuck is this new “drop pass behind center ice off the boards” horseshit? It happened two or three times last night, which indicates that this is no accident. I don’t know whether this is Colliton drawing it up or THE CORE just doing shit they’re comfortable with, but it’s got to stop. I never thought I’d yearn to see a drop pass at the opponent’s blue line, but here we fucking are.

– Be happy Duncan Keith had that incredible shot fake, because outside of that, he got horsed all night. On the ice for six high-danger chances for the Ducks at 5v5. Several turnovers in his own zone leading to sustained pressure. An interference penalty in the second because he couldn’t keep up. He will go down as the best Hawks D-man in history, but with each passing day it gets harder and harder to remember that.

– We all said that if Corey Crawford came back and was Corey Crawford, we might have a fringe playoff team. Last night was another instance of forcing ourselves to ask “What if this is what we’re getting now?” Crow probably should have had both the second and third goals Anaheim scored. On the second, Seabrook forced Daniel Sprong to almost below the goal line, and Sprong still managed to shelf it over Crow’s glove-side shoulder. In the third, Ondrej Kase did much of the same, albeit with a slightly better angle. This isn’t to put the blame for the loss on Crawford—given how many incredible saves he made on the night—but if you’re waiting for a Crawford miracle, it might be too late for you.

– Even if you count the four posts as shots on goal, the Hawks still got outshot by the Ducks. Even for the Hawks in their current state, that’s simply unacceptable.

Jeremy Colliton is in a really tough spot, with young guys who mostly suck and a Core that either can’t or won’t do the things it’s expected to do. You and I both know what this team is, and all we can hope is that Coach Mr. Turner starts focusing on getting Strome and DeBrincat more time on the ice. Because what else is there, other than another late game tonight?

Just cut my head off and kick it into the lake.

Line of the Night: After the inane Hayden fight, the national broadcast made a comment about how “He probably didn’t have to do that at Yale,” then proceeded to namedrop Yale a few more times. It was a great moment in Mute Lounge History.