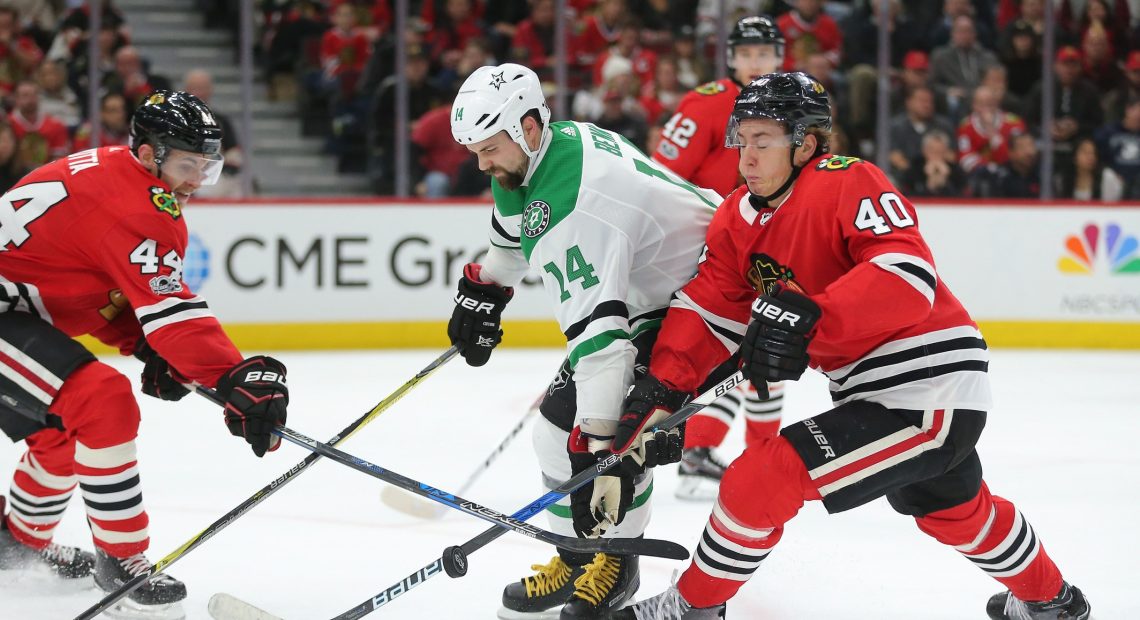 Tonight was a bit of a tutorial in what not to do in a hockey game. Malaise on special teams and defensive stupidity thwarted the Hawks tonight, making it fortunate they at least got one point. It wasn’t like Ben Bishop did anything to write home about (his SV% was a whopping .864), so we can’t say it was one of those miraculous goalie performances. To the bullets:

– Admittedly, I didn’t see much of the game against the Predators, so I’ll reference the two games prior: If in those games against the Panthers and Ducks the offense masked the ugliness of the Hawks’ defense, tonight said ugliness was fully exposed. Cody Franson was a hot mess on the power play. On their first man advantage early in the first period he had a shitty pass get picked off and Crawford had to bail him out. That turned out to be a veritable Power Play of Christmas Future because a couple power plays later, he did the exact same thing that led to Patrick Kane’s desperation hook, and the resulting penalty shot. The power play in general was a disaster, but that’s another rant. Franson single-handedly ruined two.

Second, there was the obligatory Seabrook fuck up, which this time led directly to Dallas’ third goal. He fumbled an attempt at pinching (at least, I think that’s what he was going for?) at the blue line, and Remi Elie (who??) waltzed right by him and caught Crawford off-guard.

And for good measure, Forsling shared some blame too. Yes, he had a key assist in the third, don’t get me wrong. But before those heroics were necessary, he splayed out in a stupid block attempt way back in the first, and Mattias Janmark was left open to score the first goal. So there’s a taste of our defense tonight…need I go on?

– On a related note, tonight wasn’t Crawford’s worst night but it also wasn’t his best. He was spectacular on a series of shots by Elie (again, who the fuck??) in the third, but he ended the game with a .886 SV%. He got frozen on the penalty shot and wasn’t the absolute monster we’ve come to both expect and rely on. It’s nights like these when the rest of the team needs to return the favor and bail him out. Goaltending is not the problem here, I think we can all agree on that.

– The second line played the role of top line tonight. There was yet another goal from ‘ole Wide Dick—in fact it was the only power play goal out of their seemingly endless chances when Kane made a beautiful pass to Anisimov who was positioned right at the top of the crease. Kane then had a redirect to tie it in the third (that aforementioned Forsling assist), and Schmaltz drew about 85 penalties. At least we have one line, eh?

– Alex DeBrincat is good. I just thought you should know that.

– The Hawks power play is not good. I just thought you should know that too. No, really, they were 1 for 7 tonight, including over two minutes of a man advantage thanks to John Hayden’s face getting mauled by Klingberg’s stick and they still couldn’t score. The Hawks had four power plays in the first fucking period, and yet their shots remained in the single digits until well into the second (and a few more power plays). With the exception of the Garbage Dick—Wide Dick play in the second, it was clown shoes all night.

–Something on the Stars is named Pitlick. So, ya know, whenever you think you’ve got it rough, imagine going through life with that name. It’s helping to cheer me up right now.

–Beer de Jour: Fistmas by Revolution. Because I’m in the holiday spirit, damnit.

The Stars are an eminently beatable team, and we’ll get another chance on Saturday. I don’t know if tonight’s fuckery will lead Q to #FreeKempny, but if this doesn’t do it, I don’t know what would. Or rather, I don’t want to know. Onward and upward.

How To Shoot Yourself In The Face – By John McDonough