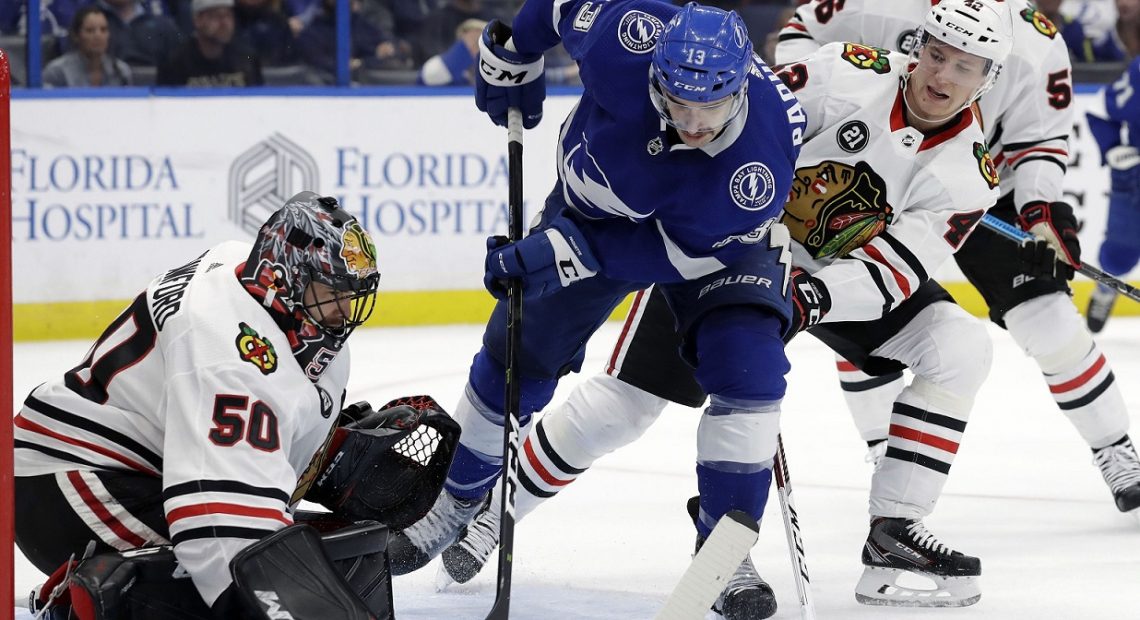 A really good team played a borderline mediocre team tonight. The Ning put this away early, but there were a few things that weren’t a complete diaper filling tonight. Let’s do it quick, because there’s a $30 handle of Eagle Rare calling my name.

– I’m not sure about this man-to-man defensive scheme. Goals 1 and 3 looked to be the result of the man system breaking up, and both of them occurred with 20-19-88 on the ice. On the first, you had Brandon Saad and Patrick Kane both shadowing Nikita Kucherov on the far boards, leaving the near-board side open. With Toews covering on the left wing, you get Saad positioned too high and Kane positioned too low, giving Tyler Johnson all the time and space in the world between the circles to shelf an easy shot off a Kucherov feed.

On the third goal, it looked like another instance of missed coverage. After Seabrook belched a clearing attempt in the neutral zone, Erik Cernak shouldered in behind the net, dropped an easy pass to Kucherov, who then hit a streaking Brayden Point through the middle. Once again, Saad looked a bit too high between the circles, but Erik Gustafsson having his back to the play was way more emblematic of why I’m not entirely sure about the man-to-man defensive scheme.

– Duncan Keith is turning more and more into a question with no answer. Yes, he and Forsling ended up with a 60+ CF%, but the Ning were up their asses the entire first period. The second goal was a direct result of a Keith turnover in the neutral zone, Keith getting overpowered by Kucherov in his own zone, then a back-and-forth Johnson–Kucherov–Johnson connection, all from a spot where Duncan Keith would have been five years ago. Asking Gustav Forsling to cover for Cowboy Keith is never going to end well, and Johnson’s second goal was a direct result of Forsling dropping to cover for an overpowered and out-of-position Keith. He also had a slashing penalty while the Hawks had possession, which had red ass written all over it.

– My initial reaction is always going to be “defend Erik Gustafsson,” because I’m a goddamn idiot. But tonight was simply a pile of horseshit puked on with a belly full of Malort for Cowboy Gus. Gus got pantsed on the Ning’s fourth goal by Ryan Callahan, who would have a hard time juking a box with a roll of quarters. He and Brent Seabrook were just awful today, finding themselves on the ice for three of the Ning’s four goals.

– Anyone who wants to talk about how Jeremy Colliton is this Great Communicator can take that idea, melt it down into a cylindrical wax, use it as a lip balm, and kiss my entire ass with it. On what fucking planet is it acceptable to scratch your fastest, most talented puck possession defenseman in Henri Jokiharju against a team that Daron-Malakian-lookalike John Cooper has flying into the red night in and night out? Colliton said that this was a part of his development and even had the nuts to allude to Joel Quenneville’s (SKY POINT) elusive MORE that Jokiharju has to give to the team. By all the metrics I could find, Jokiharju has been the Hawks’s most effective defenseman all year and especially lately (at least in terms of possession). If Colliton wants to look like Ben Wyatt, he can knock himself out, but don’t turn Jokiharju into fucking Ice Town.

– The Fortin–Kampf–Kahun line is like chocolate-covered mayonnaise. They’re decent at getting the puck in the zone, but once they’re there, they fumble like they’re trying to plug their dead vape pen into the outlet behind the couch in the dark. Any time they charged the zone, it was only a matter of time before the wheels entirely came off, which was no more obvious than on Fortin’s hilarious broken stick on a breakaway in the first.

– Mike Milbury called Corey Crawford “average” since his return to the Hawks and said he “needed to see the wins and the right numbers.” What a stupid asshole.

Super excited to learn what Jokiharju got to learn as a part of his “development” in the press box tonight. They’ll visit Uncle Dale and the Panthers tomorrow.

Beer du Jour: Great Divide Fresh Hop in the first and second, Eagle Rare with a High Life back for the third.

Line of the Night: “As part of his development, it’s Jokiharju’s chance to watch and learn.” – One of the national telecast weiners paraphrasing THE GREAT COMMUNICATOR on why Jokiharju was heathy scratched.