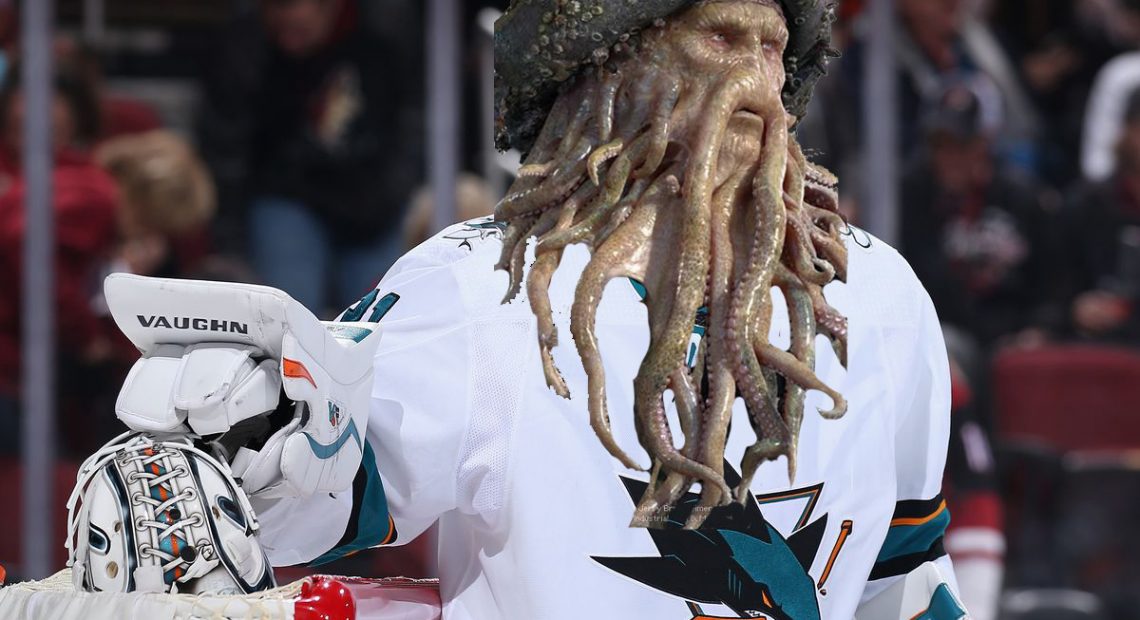 For most of last year, if you paid attention to the underlying numbers, or metrics, or analytics, or whatever other scrabble word you use, you knew that the Sharks were one of the best teams in the league. In fact, by those measures they were basically blowing away the Western Conference, and somehow losing the division to the Flames was basically a crime. They always had the puck and were creating most of the chances.

You also knew that they were being let down by simply horrific/comedic/surreal goaltending, with Martin Jones putting up a .896 SV% on the season. Aaron Dell wasn’t any better, and all the good work the Sharks skaters were doing was undone a lot of the time by Jones and Dell whiffing and whatever puck was half-heartedly flung in their direction, with opponents apologetically celebrating the goals they never saw coming or considered were a possibility.

There weren’t a lot of options for the Sharks at the trade deadline, and you could see why they stuck with Jones as well. In his three years as the Sharks starter previous to last season, he had never been below .912, and also had been dynamite in the playoffs. In San Jose’s run to the Final in 2016, he was .923 in 24 games. The following season he was .935 in a first-round loss to the Oilers, and then .928 as the Sharks went out in the second round. The policy of keeping the faith made sense, or at least was defensible.

Still, Jones wasn’t very good in the playoffs last year, and had he even been average perhaps the Sharks find their way past the Blues (GRRRRRR….). Again, the options in the offseason weren’t exactly shiny and must-have. Perhaps they should have put in a call to Robin Lehner, as Sergei Bobrovsky would have been out of their price range. Perhaps they wanted to give Jones another half-season to prove he can come back to what he was. And only at the next trade deadline will they pull the trigger if it’s warranted.

Still, it’s hard to find a comp of a goalie that fell apart at 29 and then rediscovered it. As a warning, these should always be taken with a grain of salt, because Jones is his own man and whatnot. His season won’t be affected because of what other goalies did in the past. As Fifth Feather would say, it’s like deciding what the next hand of a blackjack will be because of what’s going on at another table. The odds say one thing, but they don’t actually force certain cards to be turned over. Still, let’s take a look.

Since the great Lockout of ’05, Jones’s season last year was the 12th worst for goalies 28 or above who made 40 starts or more. Ben Scrivens had a worse season at 28 after being pretty good, and was out of the league in less than a year. Marty Turco struggled out of the lockout at age 30, posting a .898. He recovered a very little, posting a couple .910s but never coming close to the Vezina form he had before. And really that’s about it for comparable age and falling off a cliff at said age.

The Sharks would happily take that .910 Turco put up after his stumble, as given what else they are capable of that would be more than enough for another 105-110 points. If Jones can’t get there, and he is indeed this broken bumper car now, the options again aren’t great. Would they take one of the Hawks’ goalies if they indeed have to sell at the deadline (or would even admit to)? If the injuries to the Penguins become too much, would Matt Murray be available? Laurent Brossoit from Winnipeg? These are all reaches in terms of availability.

The Sharks clearly don’t have much time. Even with Joe Pavelski put on his bike, Logan Couture, Joe Thornton, Marc-Edouard Vlasic, Brent Burns are all over 30. Erik Karlsson will be soon. They probably can’t toss away another spring on the hopes that Martin Jones finds it for no reason other than HOCKEY.

The opening signs aren’t encouraging. Getting blitzed by Nashville and Vegas twice isn’t exactly shameful, but those are the teams the Sharks will have to get through come springtime. It was a rough opening for sure, but the Sharks might have liked it if Jones had stood tall in any of the games. And he only faced over 30 shots in one of them.

This is a game of chicken the Sharks are playing with themselves. Someone is going to have to swerve or the whole thing is going to pieces.