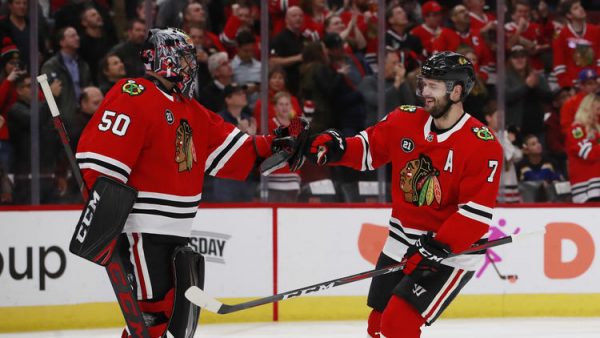 It’s the first win of the Jeremy Colliton era! And the end of a wretched losing streak! And why did it happen? Because Corey Crawford is god. To the bullets:

–The first period was just plain old uneventful. Crawford had a big stop on Vladimir Tarasenko (more on him later), and David Kampf and Brandon Manning fell over one another in the defensive zone in a very accurate Three Stooges impression, but it’s the Blues and they weren’t able to capitalize. Aside from that, it wasn’t a poorly played period by any means, just not a flashy one.

–The second wasn’t much better, but the Hawks got their one and only goal and on the power play no less. It was actually more luck than skill, as Jay Bouwmeester kicked it in while Jay Gallon was flopping around. But whatever, we’ll take it. And honestly Allen wasn’t that bad tonight, it’s just that Crawford was better.

–And he had to be—the Hawks gave up 28 shots on goal and only managed 19 of their own. Same old story. In fact the Hawks got domed in possession tonight and were only above water in the first period. They had a 39.4 CF% and 33.3 CF% in the second and third, respectively. Going by the eye test alone tonight, the defense actually didn’t look that bad, that’s the fucked up thing. Yes, Manning and Forsling as a pairing was rather terrifying to watch, but for the most part the defense at least attempted to get themselves in front of their net. After leaving O’Hare-runway-sized gaps in front of Crawford for most of last week’s games, this is a relief. And yet, they still gave up nearly 30 shots. Baby steps, but there is still work to do.

–I’m not entirely sold on Colliton’s lines, but I also think it’s too early to start bitching about them (yet). The top line of Schmaltz-Toews-Kane is passing the aforementioned eye test. Anisimov is still too damn slow and couldn’t keep up with the again-resurgent Brandon Saad, so that’s annoying. I’m not quite sure what the DeBrincat-Kampf-Kahun line is going to end up being. They were just north of 50% in possession, which was better than the top line, and all together had five shots on the night. So yes? This is good? I have difficulty trusting Kampf to make good decisions or execute competently, I’m worried that Top Cat is wasting his time, and I’m suspecting that Kahun was basking in reflected glory from being on a line with Jonathan Toews. All of these assumptions could turn out to be wrong, so again, no judgement…yet….

–Tarasenko had an interesting evening, sacrificing a tooth (wholesale, like a cartoon with it popping out of his mouth onto the ice), and he foiled the Hawks trying to get a damn empty net goal. Twice. This had to have been a painful game for him, in both the physical and mental sense.

If the drought was going to be broken, it makes sense that it came against the lowly Blues. The fact that we had to eke out the win with a fluky own-goal by dumbass Bouwmeester and Crawford had to stand on his head against these bottom-feeders to keep the Hawks in the game is a little worrisome. But hey, it’s a win! And if we can beat these fucksticks, then we can do the same against the equally terrible Kings on Friday. There’s nothing to worry about, right?