Game #17 – Hawks vs. Hurricanes: Douchebag Du Jour – The One And Only 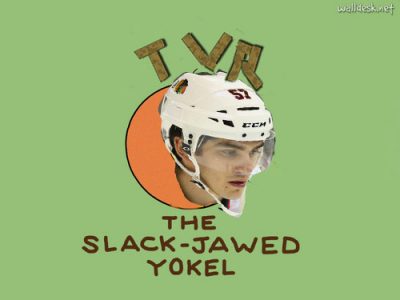 Could it be anyone else?

Here’s the thing. The vitriol poured at Trevor van Riemsdyk–of which we were the most vociferous and passionate–was never really aimed at him. TVR is what he is, and he was what he was. An extremely limited, right-handed d-man who didn’t have very good instincts at all, and couldn’t counter that because he really wasn’t all that mobile. He was sure he was Phil Housley at times, even when most of his pinching and shotgunning up the ice led to his partner being completely exposed. The nadir came in Game 3 last year in Music City, where Kevin Fiala couldn’t have abused TVR any more without an arraignment.

No, the ire was aimed at Joel Quenneville, who somehow couldn’t see what everyone else was seeing. Q not only was playing a hunch for two years, he was playing one over and over that had already lost. Q kept hitting on 17 even when he’d already busted repeatedly. At some point this was hitting 18, if that were even allowed. And he kept ending up with 27.

It was infuriating, as many other d-men, who were galactically better than TVR, never got anywhere near the rope. If Nick Leddy could have seen what TVR got away with, he would have died of shock. Brian Campbell must’ve watched last year and wondered if it was the same coach as his first three years in Chicago or if he’d had some sort of lobotomy. Even Michal Kempny now must wonder about being so far from home and having to have watched that all of last season.

It’s those hunches that have sunk the Hawks before, and Stan had to remove the temptation. At least it’s somewhere else now, and TVR is dragging down the third pairing in Carolina. And we’re free to laugh, all the while sympathizing with Hurricanes fans and their confusion at how this player with no apparent sense of direction continues to get minutes. We’ve been there, kids.

It’s weird in the NHL. TVR will be able to ride off “Blackhawks Gloss” into jobs for a few years now. There are more than a few GMs who will say, “Well Q gave him serious minutes, so there must be something!” And no one will pay attention to what he isn’t doing on the ice, which is anything.

But at least it’s over here.