Game #16 – You’ve Got Your Knife Up to My Throat, Why Do You Wanna See Me Bleed? – Hawks 2, Penguins 2 (Penguins Win Keno tourney) 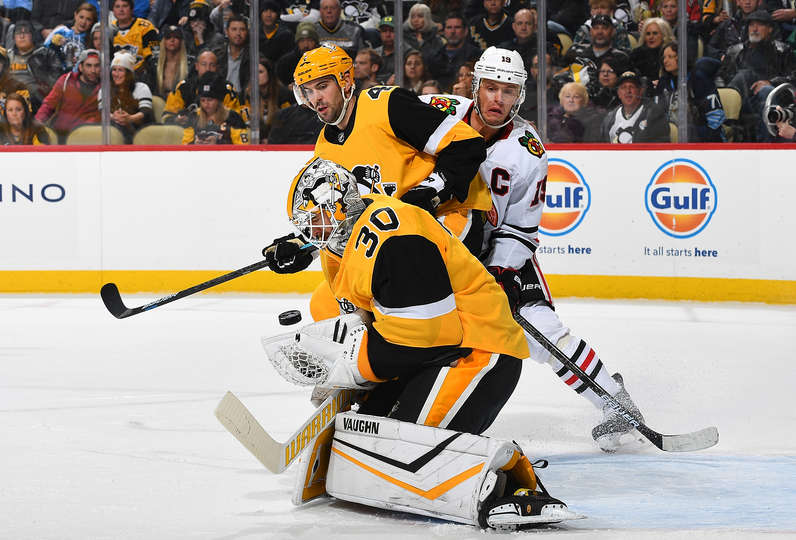 A frustrating loss for the Hawks, but for a different reason tonight. Instead of getting ragdolled, the Hawks spent most of the game looking good. But a blown puck-settling on an easy clear and a microcosm of why we don’t trust Colliton’s system kept Pittsburgh in it. Let’s clean it up.

– An outstanding game for Brandon Saad, who was consistently the best Hawks forward on the ice tonight. He led Hawks forwards with a 60 CF%, which shouldn’t be too surprising. What was a bit surprising were his silky hands and feet on Kubalik’s goal. It felt like I should have been paying a $49.99 monthly fee, using an incognito browser, and still deleting my history after watching it.

First, Saad blows through the neutral zone by himself, starting a 3-on-1 with himself, Kubalik, and Fetch Koekkoek. He drops a pass back to Koekkoek, who then biffs a pass back to Saad. The pass was in Saad’s feet, going full speed, and with little room to work. But Saad kicked the puck to his stick and laid a smooth pass to a streaking Kubalik, who potted a one timer that whispered, “Fuck you, Jeremy” as it hit the back of the net.

Then, on Kane’s goal, it was Saad barreling toward the net, forcing Murray to stand pat and give Kane the short side. Saad also hit the crossbar in the first. Saad’s a special player, even if he’s never going to lead any scoring categories.

– Alex Nylander also had a good start to the game, though he disappeared later on, which is sort of his thing. After Saad blocked a shot in his own zone, he set up a 2-on-1 with Nylander. After passing to Nylander, Nylander went right back to Saad with a sweet saucer pass to Saad, who just missed off the near post. Nylander’s coverage was generally good as well. If he can put it all together for a full game, he could contribute. Baby steps.

– Erik Gustafsson has looked much, much better lately, especially on defense. Though it’ll never be a staple of his game, he had at least one break up at the blue line and one steal in his own zone to snuff out a rush. He also looked pretty good on the Hawks’s 5-on-3, which the Hawks should have scored on. After playing catch with Kane on the near boards, Gus walked up the middle, drawing two of the Penguins’s three defenders. He then shoveled a pass to a wide-open Kane, who flat-out shanked the shot at a yawning net. Right idea, bad execution by the one guy who usually executes there.

– Even though he missed the PP goal, Patrick Kane did make up for it. His short-side goal was precisely what you expect from him. That creep can roll.

– Kane’s goal came immediately after Brent “I still have more to give but what I didn’t tell you is that it’s to whichever team is playing me” Seabrook whiffed on a simple pass from Strome in the defensive zone. This was striking-out-in-tee-ball-level whiffage, which left Dominik Kahun pick up the puck and drive for a nice set up. Seabrook was fortunate that Kane picked it up and said, “Fuck this, I’ll do it myself.”

– Crawford had another great game nullified by his bad defense. Twenty-nine saves on 31 shots ought to get you a win. But the Hawks can’t seem to score more than two or three a game. Ho hum.

– All right, this Slater Koekkoek horseshit needs to fucking stop. He broke two plays that led directly to Penguins’s goals. I’ve often looked at this motherfucker like a puppy looks at a loud fart on linoleum. His fancy stats typically look good, and tonight was no different (55+ CF%, 1.72 CF% Rel). But then he manages to fuck up so profoundly badly that I feel the urge to David Putty my fandom.

The Penguins’s first goal was entirely avoidable and entirely on Koekkoek. After the Hawks had some pressure in the Pittsburgh zone, the Penguins managed to clear the zone along the near boards. Instead of stepping up and corralling the clear, Koekkoek flinched and got caught half way between the puck and dropping back to defend. Evgeni Malkin turned him into dust, not only blowing by him but also scything a pass around him to a streaking (and tired) Jake Guentzel. It was a simple play that Koekkoek straight up fucked up. When Murphy comes back, they had better waive this motherfucker.

– The Penguins’s second goal was a confluence of bad defense and a bad system. First, the Hawks let Rust enter the zone, which, whatever, that’s a thing they do. Rust rings a pass around the boards, from near to far. Olli Maatta—who was benched for Erik Gudbranson in the playoffs just last year—was somehow too slow to cut it off, despite being maybe five feet from the puck by the time it reached him. This gave Evgeni Malkin not only time but also Olli Maatta all to himself. Malkin easily overcame Maatta and set up Rust on the doorstep. Crawford stops two shots point blank.

Then, Rust goes behind the net to recover the puck, and Brandon Saad picks him up. For some reason I certainly can’t fucking discern, Olli Maatta comes flying like a zeppelin out to the near boards to cover Malkin. This leaves Slater Koekkoek to cover in front of the net alone, which is not a situation anyone ever wants to be in. In his infinite wisdom, Koekkoek steps up to lay a stick into the back of Simon, who’s standing and sort of screening in about the middle of the slot, pretty far away from the crease. Meanwhile, Brandon Rust has leaked out to the spot where Koekkoek once was, giving John Marino a wide-open lane to feed a wide-open Rust.

Everything about this play was indicative of why we don’t trust Colliton’s system. Is Maatta supposed to come that far out on Malkin, and if so, why? Is Brandon Saad supposed to stay man-on-man with Rust down low because Maatta is now way out on the boards, or is that Koekkoek’s responsibility? (Based on Saad’s reaction after the goal, which was essentially, “What the fuck, man?” I’m going to guess it’s Koekkoek’s responsibility.) I’m willing to consider that Saad should have covered Rust on that play, but the idea of a forward being forced that low in the zone to cover for a slow defender jumping up is so odd. Lots of questions and not many answers, mostly because Colliton’s system often doesn’t make sense.

This is a game the Hawks should have had. There are signs of life, but if they’re forced to protect a lead late, they’re typically fucked. Still, they didn’t look like an AHL team tonight, and that’s progress.

Line of the Night: “We talk about the sellout streak but as Eddie always says, tickets are still available.” –Pat Foley, telling everyone at FFUD personally to go fuck themselves.