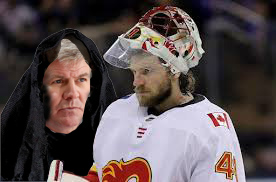 Any of you who have been around these parts for any length of time know that we rate coaches and GMs on a binary scale of Moron/Not A Moron. That’s kind of how backward the NHL is, that we can’t decipher anything more than that.

We’ve always categorized Bill Peters as Not A Moron. His Carolina teams always had some of the best possession numbers in the league for years. And they did it without really any top-line talent, though with one of the best blue lines in the league. That’s really all we had to go on, that and whether the teams actually won or not. Though that’s not always a clean indicator, because as we well know there are plenty of morons who end up with good teams (is that you peaking out from the back, Randy Carlyle?) Hell, Darryl Sutter ended up with two Cups and mere months later his players wanted to knife him in the back and leave him out in the loading dock.

And yet the Hurricanes never really came close to a playoff spot. And the reason they never did is their goalies always sucked. Like hardcore. Last year, they had the second-worst SV% at even-strength. Same story the year before. It was much better the year before that, as they were third-worst. And on it goes.

And it spanned numerous goalies. It was Cam Ward and Scott Darling last year. The previous season Eddie Lack joined in on the fun of turning into a cartoon elephant in net (which you’d think would be quite effective, except for the cartoon part). Two years before that it was Anton Khudobin who kept acting like he misplaced his wallet in the crease. All of Khudobin, Lack, and Darling came to Carolina with a solid rep as backups from previous organizations. Perhaps the GM Ron Francis missed on all of them. Perhaps Peters had no other options. But how many goalies does he get?

It hasn’t started out much better in Calgary. Mike Smith is continually facing the wrong way or waving at butterflies that don’t exist in net so far this year. David Rittich has looked good, but he only has four starts on the year, and yet Peters keeps sending Smith out there. He claims it’s the defense that’s letting Smith down, and yet .871 SV% is an .871 SV%.

Maybe Smith is just too old. Maybe there are too many miles. But this is the fifth goalie in the past five years that ends up staring at the lights at the end of most games. The fault lies not in our stars…

So there must be something in the system, right? Something we can trace? Ah ha. We may be on to something there.

Though Calgary has some great Corsi-percentages, they’re 26th in expected goals-against. Carolina last year was ninth in the latter category, but 22nd in the season before that. In ’15-’16 they were 26th. We now have a foothold.

It’s the problem the Hawks have. They might gather more attempts. But the chances they give up are far better than the ones they get. And that’s because the defense is so active, required to help create offense, that the goalies are left to fend for themselves. You can see where the Hawks need it, given how short they are at forward. But are the Flames? They have one of the best top-sixes around. Sure, the bottom-six could use some help, but it’s not an abyss. Why is the defense running all over the place?

Maybe Rittich can save them. Maybe he’ll be the one that stands up against the mudslide that’s seemingly always headed toward Peters’s team’s net. If he’s not, we’ll almost certainly have an answer on what the problem is.

Tags: Bill Peters Calgary Flames mike smith once again it's not the arrow