Game #14 – Hawks vs. Sharks Spotlight: Logan Is Finding Out What It Feels Like 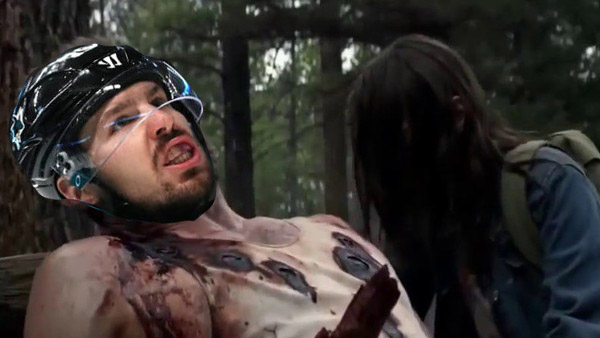 Over the summer, the Sharks made a pretty big call. Their usual M.O. has been to just strip their captain of the position when their season flamed out before they felt it should. Joe Thornton and Patrick Marleau both felt the sting of that particular whip, with the former taking over for the latter and then Joe Pavelski taking it from Jumbo Joe. And then everyone would pretend everything was fine, in true Canadian fashion.

This time around, the Sharks just let their captain toddle off somewhere else. In order to fit other salaries and make room for some more kids, the Sharks let Pavelski walk to Dallas, and bestowed the “C” onto Logan Couture. It has been an ill-fit, shall we say.

Couture has been the biggest example of how the old and not-all-that-quick Sharks have struggled to recover from their long playoff run last year. Whereas last season you could argue they were only undone by the league’s worst goaltending, because the rest of their measurements were some of the league’s best. If they’d even had representative goaltending, they probably walk out of the Western Conference last year. And we’ll never forgive them for not doing so and saddling us with this cloud of despair.

Couture has been crossed by some fiendish PDO treachery. He’s shooting below 7% at evens and 3% overall. But he’s also not getting to the spots he used to that would drive that shooting-percentage up dramatically to career norms. His shots per 60 are down a third at evens, his attempts down a quarter, and his individual expected-goals are half of what they were last year. Throw in the power play time and things look better, and that 3% number will go up. But the Sharks need serious help at evens and he’s not providing it.

His possession numbers stink, too. Couture has always been something of a high-event player, but he mostly kept those events to the other end even if he was on the ice for a decent amount of attempts and chances against. You live with decent amount against when a player gets a ton for. Well, the second part hasn’t happened this season, and now Couture is just a player who’s on the ice for a lot of chances against. Not good.

How much of this is due to the absence of Pavelski? Couture has seen him replaced with Patrick Marleau for the most part, who just might be clinically dead. Timo Meier is still the main running buddy, as he was with Pavelski and Couture last year. So if only on that limited evidence, Pavelski has been a big miss (and while Pavelski’s individual numbers in Dallas are down, his overall possession numbers are still very good).

So far this year, Couture has only found success with Tomas Hertl, but the Sharks would be bunching up their two biggest threats that way as well as weakening themselves down the middle, which has almost always been their strength. Joe Thornton isn’t taking on #2 center assignments at age 93. Quite simply, the Sharks aren’t as deep as they once were and they don’t have enough wingers to go around.

Perhaps as the year progresses, a couple of their kids can step up like Lean Bergmann or Dylan Gambrell. But it seems like an awfully big ask for neophytes to immediately take roles for what’s supposed to be a Cup contender. The Sharks might have to swing another trade, which will only kneecap their future even further.

The Sharks were always a bit up against it given their collective age. They don’t have one core piece under 30, other than Meier and Hertl. The kids haven’t caught up. But they couldn’t have expected it to catch up this quickly, and neither could Couture. But yet, here they are.