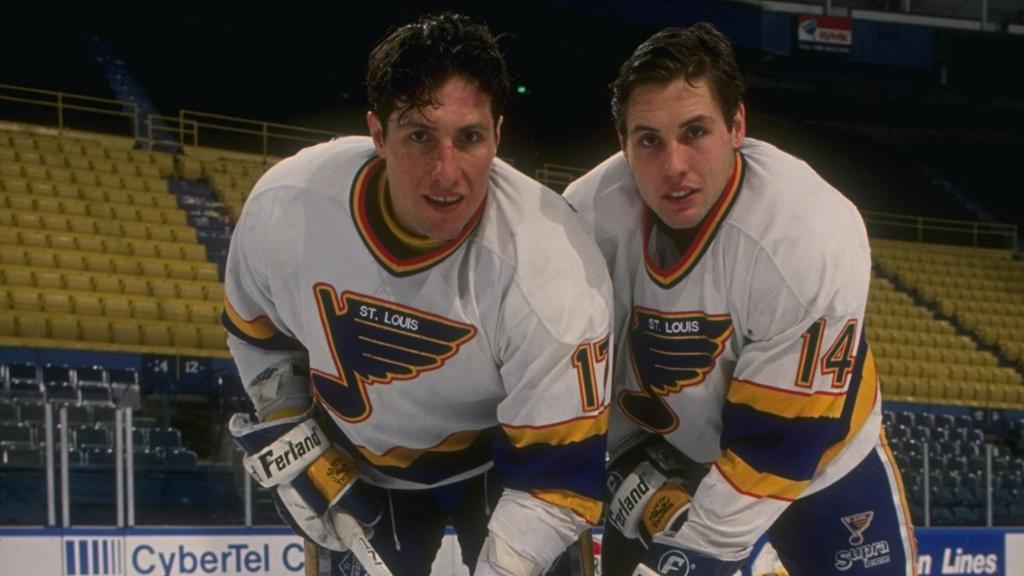 Believe us, we’re even more sick of them than you are. But with Hawks-Blues games being crammed into the first month, we have to put up with @StLouisGametime together. Just close your eyes and think of a happier place, and soon it will be over.

When’s Mike Yeo getting fired? Is it tomorrow? It’s tomorrow, isn’t it?

Here’s a fun story. When Andy Murray took over for Mike Kitchen as head coach of the Blues, his first game behind the bench was against the Hawks. When Murray got replaced by Davis Payne, his first game was against the Hawks. When Payne was cut loose, Ken Hitchcock’s first game was against the Hawks. You remember Joel Quenneville used to be the Blues head coach, right? His last game with the Blues was a Hawks game. And here we are, Mike Yeo, embattled Blues head coach, piloting a quickly sinking ship and it’s a Hawks game. Too bad Craig Berube, the associate coach who has experience stepping in mid-season, wasn’t hired yesterday. So Yeo could follow in Q’s footsteps and make tonight his last game. When they beat Toronto a week ago, Yeo said after the game he didn’t know why his team played better. After Thursday’s blowout loss, he said something to the effect of the Blues focused a lot on the end goal for the Blues and not the process of becoming a team. That’s some mumbo jumbo bullshit that frankly sounds like an indictment of his own coaching. He’s tried to be nice. He’s tried to be mean. Nothing works. Maybe this is telling: when the axe finally falls and a new guy is in charge, Alexander Steen and Alex Pietrangelo will still be Blues. Petro was a young guy just coming in, but Steen was established when he came to St. Louis. The next guy will be their fifth head coaches in St. Louis (Murray, Payne, Hitchcock, Yeo, Berube). If Berube is only the interim and they name another permanent head coach, that would be six. These are two of the leaders of the team. Maybe they shouldn’t be.

When’s Jake Allen getting fired? Is it tomorrow? It’s tomorrow, isn’t it?

Jake Allen has to fucking love Mike Yeo. He probably offers him a discreet over the pants HJ on the team plane as a thank you. Because hardly anyone is talking about Jake Allen in St. Louis right now. In eight games this season, his goals-against average is 3.93. He’s pushed his career GAA to 2.53. If he tries hard enough (doesn’t try enough?), he could double his career average this season. Only one more goal a game. And I think he can do it. He’s stopped only 87.6 percent of the shots he’s seen this season. Those numbers would get most goaltenders put on waivers and then not claimed. Of course Allen is in the second year of a four-year deal paying him more than $4 million a year. It’s not Brent Seabrook bad, but even Cam Ward wonders how Allen got that contract. But like I said, no one is even mentioning Allen as an anchor pulling the Blues to the bottom of the ocean. So no, he’s not getting fired tomorrow. Even if he deserves it. He’s problem 1B on a list as long as my arm. And I have long arms.

Why is Vince Dunn terrible this year? Is he getting fired?

Vince Dunn is not terrible. You see, Brad Shaw was an assistant coach here forever. All those coaches I mentioned above, he outlasted almost all of him. He was in charge of the defensemen. Now he’s in Columbus. And Mike Van Ryn is the assistant in charge of the defensemen. I’m sure he has a system. If you named it, the moniker might be Chase The Other Team Around Like A Puppy Chases His Tail And Never Get The Puck Like The Puppy Never Gets His Goddamn Tail. Van Ryn has Jay Bouwmeester go from a healthy scratch for the first time in his career to basically leading the defensemen in minutes the next game to third-pairing to practicing yesterday back on the top pairing. When Yeo gets fired, if he doesn’t pack up Van Ryn with him, there may be a riot. And if there’s anything we know how to do in St. Louis, it’s riot.

Your Schmaltz is as big as ours….

Jordan Schmaltz is a find third-pairing defenseman. He’s not too fast or tough. He’s ok. He’s fine. Don’t get me started on the mistakes the other defensemen are making on a nightly basis. I haven’t screamed his name at the TV or at the game yet. That’s a positive sign. He was a first-round pick, but was one of the slowest in his draft class to sniff the NHL. He’s fine. Honest.

When are you getting fired? Is it tomorrow? It’s tomorrow, isn’t it?

This is my seventh season running the Game Time paper. Before that, I wrote for the previous editor/publisher, Gallagher, for seven seasons — six on the front page. So this is my 14th season writing for GT. Our prospect guy is the only one who has written longer. During that time, the Blues have won four playoff series. All those coaches up above, I’ve written extensively about all of them from Kitchen on. I’m still here and all those guys are gone or will be gone soon. I’m the cockroach of St. Louis underground hockey writers. It’s going to take more than one shitty season to get rid of me. And if this wasn’t a well-disguised cry for help, I don’t know what is.