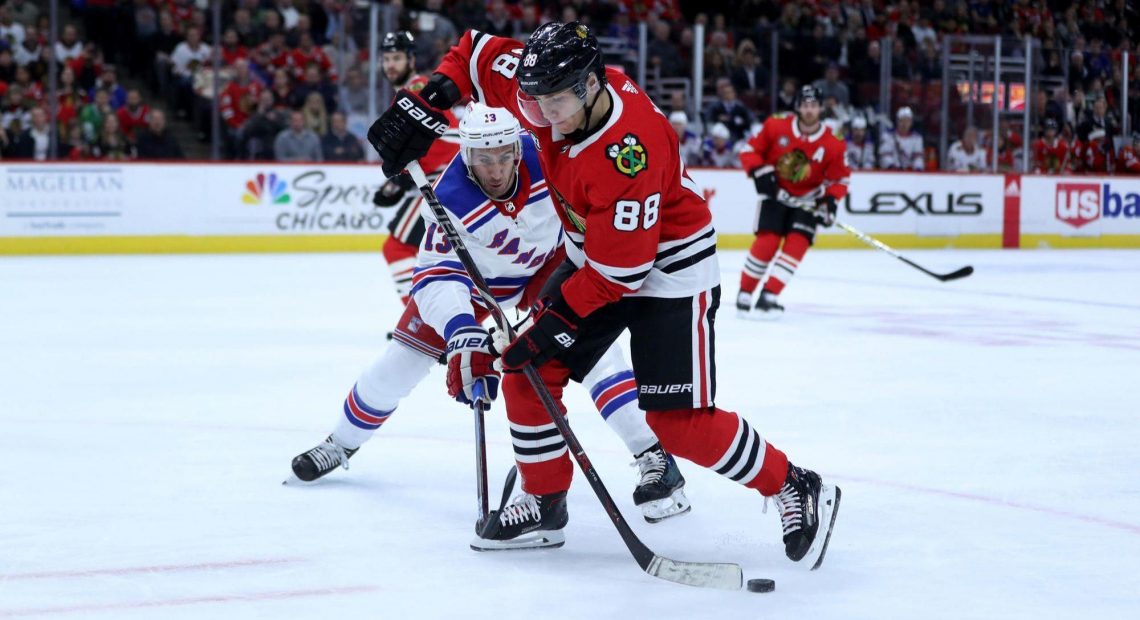 Tonight felt like a bunch of coked-up ferrets were let loose on the ice and we got to watch the bizarre yet entertaining spectacle. At times it was hilarious, at times it was maddening, but it definitely wasn’t as dull as you might think for a mediocre-at-best and mostly-really-crappy team matching up for the evening. To the bullets!

–To that point, neither team was really dominant. Yes I know the Hawks scored four goals, but one was an empty-netter and it wasn’t until late in the third that the Hawks put this away. Jonathan Toews scored early in the first after McQuaid and Skjei went full-on Three Stooges and fell over both the blue line and one another, leaving Toews alone on Lundqvist. But then Brandon fucking Manning being Brandon fucking Manning allowed the Rangers to tie it up moments later. Each team would get momentum and a bunch of chances, yet frantic goaltending by goalies vastly better than their respective defenses would fight off the onslaught. In total both teams gave up 6 penalties, so frequent power plays kept the coked-up pace I mentioned. Possession ricocheted as well—the Hawks had over a 60 CF% in the first, then down to 48% in the second, then back to 61% in the third. It was, as they say, a back-and-forth affair, despite the broadcast singing the team’s praises.

–So it’s admittedly annoying that the Hawks didn’t dominate this entire game because, as we’ve said, losing to truly good teams is acceptable, but stretches like this one are where the Hawks can actually pretend to be contenders. Now before I sound unappreciative, they had a goal in the third get waved off prior to the other weird one later in the third by Kane. So had that gone another way it would have been 5-1. But the fact that these two “goals” were so strange and close to non-goals (or in the case of the former, truly not a goal), didn’t exactly inspire a lot of confidence. The core did well, don’t get me wrong–Kane, Toews, Top Cat, and most importantly Crawford, but I want to see the Hawks be GOOD against shitty teams, not just passable.

–OK, we’re already sick of bitching about Brandon Manning so I’m not going to spend too much time here. But, I’ve got to say, as much as I hate him, I can’t even imagine how much Corey Crawford hates him. That aforementioned goal was a direct result of Manning making a pathetic turnover at the offensive blue line and standing there mouth agape at the side of Crawford’s crease while Buchnevich scored. In the second period on one of their penalty kills (which, really, can we make this stop?) the puck bounced off his dumb ass and right on goal, and Crawford had to make the save. I would seriously not blame Crawford if he pulled some retaliatory, underhanded shit on Manning. Key his car? Leave a bag of flaming dog shit at his door? Sleep with his wife? Pretty sure all of this would be forgivable. And Crawford’s only been back for a matter of days at this point.

–Fortin had himself a night. Only one goal but he was just trying EVER SO HARD the entire game. From his first shift trying to split two defenders (and he almost made it, oh he was trying), to rabidly flying around the ice to being in the perfect position for Schmaltz’s beautiful pass in the second (sidebar: not complaining about Schmaltz passing it for once), Alexandre Fortin was a man possessed (OK, boy possessed, but you know what I mean). Some of that rabidity led to dumb turnovers, which will happen in those situations. But the Hawks need speed and I’m also not going to complain about the scoring or effort.

–I realize this is going to sound stupid and I can’t back it up with numbers, but Brandon Saad had a fire still lit under his ass. The stats won’t necessarily show it—one shot, no points and crappy possession at 48 CF%. But believe me, he was all over the ice, and while this isn’t going down as a historic game for him, his improvement this season continues.

All in all, tonight was another win that they had to have and that’s what matters. It was convincing enough and who would have thought they’d have 14 points already? I don’t know if I’d go so far as to call it an inspiring win, but it’s better than the alternative. Onward and upward.

Line of the Night: “Going to disagree with him. Strongly.” –Eddie O, in a weird moment of clarity, criticizing Adam Burish for his especially stupid comment that Henrik Lundqvist is one of the most overrated goalies in the last decade.