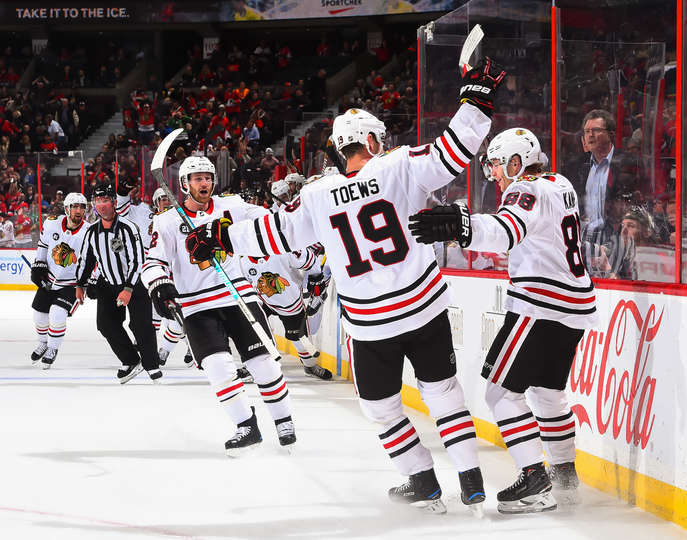 Hockey’s back. And to quote our Fearless Leader, whether it was fun or just fun-bad, it was, without a doubt, a fun game. Let’s do it.

– Everyone ought to be relieved by how good Jonathan Toews and Alex DeBrincat looked tonight. Throughout most game, the only time anything happened for the Hawks was when those two were on the ice. Each scored goals by themselves (Future Norris Winner Erik Gustafsson got an assist on Toews’s, but it was a Toews effort from start to finish), and while those probably aren’t goals anyone scores against a team that isn’t the personification of a bad mushroom trip, they were still impressive. DeBrincat’s had a flash of “Fuck you, I got this” that spawned memories of the dearly departed Marian Hossa. He made Thomas Chabot look like a horse’s ass, using him as a screen to pot his shot over DA LOCAL GUY’s glove.

Toews’s goal was the result of Mark Borowiecki deciding that the best way to defend a 2-on-1 is to drag your ass on the ice like a dog with worms. You could hear Toews thinking “Is this fucking guy serious?” the entire time he drove through the circle. But you take what they give you, and Toews did that. He looked like vintage Toews, complementing power and speed with excellent vision all night. He and DeBrincat were dominant in possession as well, each posting 55%+ on the night.

– For all the nervousness we had (and still have) about Cam Ward, he looked pretty good tonight. The only goal you can really put on him is the PK goal, which Colin White stuffed right through his legs. But he buckled down and made a couple of surprising saves in the third, keeping the Hawks in it in time for Patrick Kane to start giving a shit. The first came off a redirect, and the second was the result of all five of the Hawks’s skaters either falling asleep or doing something monumentally stupid. And that one all started with Brandon Goddamn Motherfucking Manning.

– Let me tell you a story. A few years ago, I adopted a cat. She was a good cat, but she had a heart defect. I tried giving her medicine to make her better, but the day came when I had to put her down. She was just 4 years old. It was one of the hardest decisions I ever had to make, and I still think about it all the time.

I would rather put that cat down every day for the rest of the fucking year than watch Brandon Goddamn Motherfucking Manning play another minute in a Hawks sweater.

There aren’t enough adequate superlatives to describe what an unmitigated disaster Brandon Manning was tonight. He’s the Bret Hart of being a complete fucking ass wart: The worst there is, the worst there was, and the worst there ever will be.

Let’s start with the second goal the Hawks gave up, which occurred with Saad–Schmaltz–Kane and Manning–Seabrook. LOCAL GUY Ryan Dzingel had the puck on the near boards, and Manning went out to cover him. He gave him a body check, which, fine, whatever. But long after Dzingel had passed the puck to Matt Duchene behind the net, Manning continued to ride him into the boards for no other reason than Brandon Manning is a shit-sipping mongoloid who would drop his dick in a urinal if it weren’t attached to his dumb fucking body. Because he decided that dry-humping Dzingel into the boards was the best play to possibly make, it left a huge hole in front of the net. Seabrook tried to cover as best he could, but where the fuck do you think Maxime LaJoie was when he potted that goal? If you said, “Where Brandon Goddamn Motherfucking Manning should have been,” you win the prize of not being Brandon Manning.

Then, on the penalty kill goal, while Cam Ward shares some of the blame, the only reason Colin White had all the space in the world to stuff a between-the-legs shot was because Brandon Manning stood slackjawed at the top of the paint. At no point did he even feign an effort to break up anything Colin White was trying to do. He stood there like a 3-year-old who just realized he can’t hold his shit in anymore and mother is going to be so mad that she has to handwash the corduroys again.

Holy fuck this guy sucks. If the Hawks hadn’t won this game, I probably would have quit my job, moved back to Chicago, taken whatever construction job was happening outside the UC, and rubbed my red Italian ass on StanBo’s clean windows until he relented and cut Manning from the roster. He brings nothing to the table except an opportunity for us to completely lose our asses, which you can bank on happening every time Brandon Goddamn Motherfucking Manning laces up his rock-lined skates. Fuck this guy to the end of the Earth and back.

– Getting back to things that don’t cause a complete aneurysm, it was nice of Patrick Kane to show up 50 minutes into the game. For most of the outing, he was in mid-February “can’t buy me a fuck” mode, with a ton of lazy passing and stick handling. But when Patrick Kane decides to turn it on, there are few better. His seeing-eye pass from behind the net on Brent Seabrook’s goal was art, and the top-shelf backhander to end it is the reason most of us tune in at all. While 60 minutes of that effort would be nice, you’ll take what you get.

– I liked how Seabrook looked overall. That might just be because he was paired with Ass Wart all night, but there was a bit of pep in his skating. And he channeled early-dynasty Seabrook on his one-timer in the slot. He looks a bit thinner and quicker, so maybe all that “he’s working out” talk in the offseason was more than just another marketing ploy.

– We’re going to say this a lot, but Henri Jokiharju had a hot and cold night. He was overpowered in the first period, which led directly to Ottawa’s first goal, and he needed Cam Ward to bail him out after Dzingel broke away from him off an outlet pass in the third. But those two boners aside, HJ had himself a decent game. He finished at almost 60% on the Corsi share, took three shots on goal, and drew a tripping penalty in his own zone. You’ll take that just fine for an NHL debut.

– Brandon Saad had a ho-hum game. He was putrid early, but picked it up a bit as the game went on. He probably should have been more aware on LaJoie’s goal, and didn’t really bust his ass much to fill the spot Ass Wart left open. He had one of the lower possession shares among Hawks forwards (51%+) and deferred on a couple of prime chances. This is going to be something to keep an eye on, since there are rumors that he only plays up to the level of the guys he plays with, and Patrick Kane couldn’t be bothered for most of the game.

A win’s a win, but this shit isn’t going to fly against the Blues and the Leafs this weekend. Still, if the Hawks can at least be chaotic fun, I think we’ll all have something to occupy us until the Bears roll into the playoffs.

Line of the Night: “As good as it gets.” – Pat Foley describing Dollar Bill Wirtz’s death and Rocky’s subsequent takeover as Hawks chairman on Rocky’s birthday.