From Face To Heel And Back Again, And Other Roster Notes 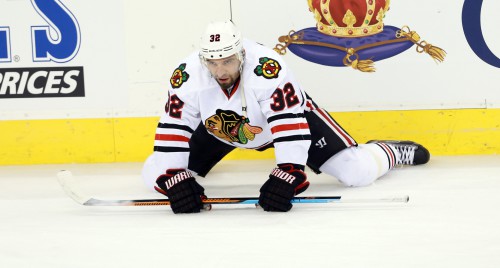 You’re going to have to get used to the upped quota of wrestling references, given my recent return to fandom.

I was inspired to write this after reading Mark Lazerus’s story on Michal Rozsival yesterday. It’s a pretty good read, and getting the perspective of what it’s like to break your ankle that gruesomely certainly makes it more vivid, at least to someone like me who hasn’t broken a bone (DATS CUZ YER NOT CHICAGO TOUGH, FELS-STINE!). And it got me to think about the arc of Rozsival’s stay here in Chicago, and how much of that should really play in to whether he should still be on this team or not.

It seems a while ago now, but Rozsival was kind of a stealth signing right before the lockout, and it’s one we were actually pretty excited about. You’ll recall, Sheldon Brookbank was signed as the 6th d-man that year, to provide that “certain something” that Q used to think he had to have in his lineup. But looking at Rozsival’s underlying numbers and watching him play really well against the Hawks in 2012 while a Coyote, we knew he could play a big role. And he eventually did, being everything we thought he could be as the Hawks went on to the Cup in 2013. Rozie was a borderline beast in those playoffs, even though he couldn’t really move. It was ok, as he was mostly paired with Keith and Oduya who could do some of his skating for him as Leddy took the shaft as the playoffs went on.

That earned Rozie a two-year extension, one we immediately were skeptical of. That wasn’t Rozie’s fault of course, he would have been looney to not sign it. But that extension, and his age, of course meant he would be here for declining play and also indirectly contribute to the departure of Nick Leddy. And that wasn’t his fault either, but he sure earned some ire from a section of fans. Especially last year, when he simply wasn’t very good at all, even with a rebound (somewhat) in the 1st round.

Then came that injury. And you can’t help but root for him, because while retiring with another ring is pretty good, a lot of people would say that no athlete should have to go out on the trainer’s table and not on their field or sheet of play. Some don’t get a choice. We saw how much it meant to Kimmo Timonen to go that way, even if he couldn’t really play anymore. And maybe Rozsival can’t anymore either. That drastic of an injury at that age with not all that much wiggle room anyway… well, it could be ugly. But it doesn’t seem the proper way for any professional athlete’s career to end if it doesn’t have to. And hey, most of these guys know when they can’t hack it anymore. If Rozie gets out there and simply can’t keep up, at least he’ll know he tried.

These guys only get a certain window to play this game at the top level, and it’s hard to get angry at any of them who want to squeeze every second they can. At least, we say that. But I remember being pretty angry at Rozsival, or more to the point the coach and GM that kept employing him. And what did Rozsival really do? He remained the aging, immobile d-man he’s pretty much been for the last five years. It’s kind of amazing how the narrative can change from season to season on just one player.

You can’t help but believe the Hawks keep getting suckered in by these stories as well, and I sentimentality can’t play too much of a role in a capped league. We saw it with Kimmo, we saw it with Handzus, and we’ve seen it with Rozie, possibly twice. If the NHL and/or the Hawks think this sort of thing is important, and it may be for fans for sure, then they should probably come up with some sort of “Vet’s Exemption” to the cap. Because the desire to keep Rozie around probably chased Jan Hejda away, and Hejda is clearly the better option at the moment (look at how Colorado’s defense has fallen apart without him). Zus’s presence kept the Hawks from acquiring another center that they needed against LA in 2014. There is just no room for error with this salary cap.

Anyway, stuff I think about because I don’t have much to do.

-A couple roster things. Tanner Kero is up for his NHL debut tomorrow, as he was lighting up the AHL early this year with six goals in seven games. Though he’s not going to shoot 33% forever. He’s worth a look, looked decent in the preseason, but I don’t know why he gets to play center over Teuvo after Hinostroza did. Maybe they’ve just given up on Teuvo in the middle, though I have no idea why. Stan is going to prove one of these college signings can play, though.

I also love the storyline that Dano has to be kept down in the AHL for development because this isn’t Columbus, young’un, and you’d better learn how we do things! Meanwhile, Hinostroza and Kero have 12 game combined above college but they can be here. Okay?

Also Erik Gustafsson is up. This is the one the Hawks are telling everyone is a prospect, basically because they traded all the others and they haven’t done much of anything elsewhere so they have to at least claim they’ll develop one eventually. Color me skeptical on this one.