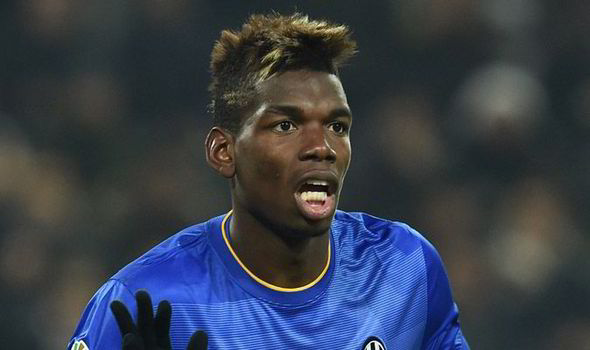 It’s Friday, so let’s get loose. If you’re like me and you spend your summers feckless and inert, summer soccer tournaments are your Valhalla. Or if you just want to take a long lunch or half day, they’re also an excellent excuse for that. The Euros used to be kind of the hipster soccer fan tournament over the World Cup. When it was 16 teams, the big teams couldn’t avoid each other in the group stages or knockout rounds, and there wasn’t really anything as an “easy” draw. But like all things in sports, the higher-ups couldn’t ignore the money to be made and bloated this thing to 24 teams, meaning we’ll go through a group stage to eliminate exactly eight teams and some teams that didn’t win a match or just won one will get through to the round of 16. But hey, it’s better than nothing. So let’s go through the groups together in a way only I can!

France is going to waltz out of this group, and is kind of the favorite to win this whole thing as they’ve won the previous two tournaments they’ve hosted (Euro ’84 and WC ’98). Their midfield is disgustingly loaded, Paul Pogba is probably going to announce himself as the best mid in the world in this tournament, and while they might not have a central striker you’d fall in love with they have enough tomato cans that can stand still between the penalty spot and six-yard box and let Pogba, Kante, Payet, Martial, and Griezmann ping the ball off them into the net. This is known as the “Nuno Gomes Method.”

Switzerland will be a tastier outfit than normal, with the perfectly square Xherdan Shaqiri the one to watch. Romania… well, I can’t help you and are probably going to get smacked in today’s opener. As for Albania, no, Adil The Sparrow does not play for them.

There was a time when I was a huge England fan. And like all England fans, I watched their “golden generation” let everyone down and basically gave up because I had enough teams that caused me heartache in my life. It didn’t help that England became old and stale and seemed content to be that way. Then a curious thing happened, and that was basically Tottenham. Suddenly England boast an array of interesting, young, exciting players and a lot of them are Spurs in Kane, Dier, and especially Dele Alli. Throw in Sterling (hisssssss), Wilshere (for the four minutes he’s upright), Sturridge, Rashford, and one or two others and dare I say… there’s promise? This England team could really be anything, and in a lot of ways it’ll be satisfying the insistence on playing Wayne Rooney ruin it all.

Wales have one of the best players in the world in Gareth Bale, and that in itself should be enough to get them out of this group. If Aaron Ramsey can actually stay in one piece that’ll help too, but we all know he’s not going to. There isn’t a striker worth a shit in this squad so Bale is going to have to do a lot of the work himself, but hey he got them this far.

Russia always qualify for these tournament, they never do anything, and then they all head back to Zenit or Spartak and go party with their oligarch owners.

Slovakia has Martin Skrtel in defense, so they’re going give up roughly 83 goals in three games. Marek Hamsik is no longer good enough to justify his dumb hair.

Somehow, the team that won the World Cup just two years ago has found itself flying under the radar a bit, behind the hosts and Belgium and one or two others. They’re basically playing at home (insert your joke about Germans making themselves welcome in France here), they have a squad so loaded that it doesn’t need Marco Reus, and it now has the confidence of having gotten it done before. Sure, Hummels and Boateng isn’t a center defensive pairing I totally trust, but it was good enough in Brazil. Ok, the strikers absolutely blow, but they always do and Tomas Muller scores anyway. A midfield with Ozil and Kroos and Can and Draxler sure can create enough chances. They’re going to be annoyingly good.

Poland has one of the best strikers in the tournament in Robert Lewandowski, and that’s probably enough to get out of the group. Northern Ireland is going to be a contender to be the most boring team to watch in the whole tournament. Ukraine will probably be slightly better than I think and might nip third place to get into the round of 16, and I guarantee you won’t remember any of their matches.

We’ll probably never seen a team rip off three major tournament wins in a row like Spain did 2008-2012, nor will we see one fall apart as spectacularly as they did in Brazil, probably from pure exhaustion. They have the best keeper in the tournament, assuming David De Gea doesn’t end up in prison before the tournament is over. I don’t know that I trust Sergio Ramos to not get sent off and Gerard Pique to actually be able to move. The midfield might be getting old but has been buffeted by Koke and Thiago Alacantara and Bruno Soriano, but will probably still trust Iniesta, Fabregas, and Silva. They’ll get out of this group, after that I can’t tell you.

Croatia is going to have one of the better midfields in this competition, with Rakitic and Modric running most things. That’s a great place to start. Madzukic might be the angriest player in this tournament. They’ll be right behind Spain you’d think.

Turkey always annoyingly end up in the 2nd round, and then annoyingly kick their way to a win on penalties and are generally the team you label, “What Are You Doing In My Quarterfinals?” Tomas Rosicky still gets in the Czech squad, which pretty much tells you everything. They’ll never be as good as they were in Portugal ’04, where if Nedved hadn’t gotten hurt they probably would have won the fucking thing. Milan Baros forever.

If you want to be one of the cool kids you ‘ll say Belgium can win this. Because they can. This squad is disgustingly loaded. Eden Hazard started caring again just in time for this tournament. Romelu Lukaku tore apart the Premier League by himself ahead of a pretty useless Everton squad (I really enjoy writing that). It has the best defender in the Premier League this season in Alderweireld. De Bruyne, Nainggolan, and Dembele should comprise tons-o-fun midfield, and hopefully leave awful battering ram Fellaini on the bench or in a dingy basement where he belongs. And yet you can’t escape the feeling that they’ll fuck it up.

Italy sucks. This is like the worst Italian squad we’ve seen. Which means they’re going to foul, kick, and complain their way to the semifinals because that’s just what they do.

Ireland will bring the party and not much else. Robbie Keane is still here for fuck’s sake. But it does allow you to say “Wes Hoolahan” as much as you want.

Woof. Portugal have the One Dude, and are almost always terrible to watch and never get as far as the talent would suggest. Maybe Ronaldo will score enough to get them far, but it’s unlikely. They can certainly get out of this group though and then lose some terrible match to the first real team they see. Pepe is a good bet to get sent off twice in this tournament. Christ, Eder, Nani, and Quaresma are still here! What a waste.

Austria have become something of a dark horse, and in this group why not. And hey, if Marko Arnautivic plays for them so can I.

Iceland already did us a favor by keeping the overhyped and overrated Dutch out of this tournament. You’ll want to root for them because METAL. And they could even sneak out of this. They’re getting a draw against Portugal, you just know it.

Hungary will be an announcer’s nightmare, but anything coudl happen in this group. And you’ll hear a lot about how they made two World Cup Finals way back when.

So that’s it. Let’s all get comfy because those of us who are into this won’t be moving much the next month.