Fishing In The Clearance Bin At Some Tragic Casual Corner

“…and it’s sort of comical how you think you’ve made a choice that exempts you from an NHL forward when in fact, you’ll be playing the forwards selected by the very people in this room from this pile of stuff.”

-Miranda Priestly, or at least she should have

Let’s get something out of the way right at the top. Jiri Hudler was not a make-or-break player for the Hawks. He was not the difference between them winning a Cup and them not. They would almost certainly need one more forward or two even if he signed here. But he might have been the difference between gaining an automatic playoff spot and fighting for a wild card, which could mean something and which might not.

However, the Hawks not having $2 million to scrape together to get a player pretty desperate for a job tells you the dire straits they are in. While some Hawks fans would love to believe that A) the Hawks didn’t really want Hudler or anyone else and B) this was all part of the grand plan, that is simply foolishness. If the Hawks didn’t want Hudler they’re simply wrong, whatever his flaws. They are short two proven forwards on the top six, and if we put Hossa with Toews to make up that gap then there are two holes on Kruger’s wing on the third line and in the West you have to have a top 9 at minimum. As for a plan, well, the Hawks are making it up with what they have to, thanks to holding on to somethings for longer and more money than they should have. But we’ve been over that and over that.

The Hawks had a decision to make this summer, and it was either upgrade at forward or defense. They could not afford both. They made the right decision in upgrading the blue line because with a solid blue line you really can’t be a bad team. Some of this hinges on how much is hanging off Bottomless Pete this season, but we’ll worry about that when he’s slogging up and down the ice at training camp.

There’s also this perception from some that the Hawks simply have to throw open the door and whatever veteran will just come walking through with an expression on his face like he was just let in to Willy Wonka’s Chocolate Factory. But if you’re Hudler, and coming off a down year, and maybe have one more big contract left at 33 when this season is over, where does it look more likely to put up big numbers? Bum-slaying on the goal-happy Stars’ third line or taking on far tougher competition with Toews and basically whatever on the other side? Your power play time is basically going to be the same either place. It’s not so simple.

There are two bargain bin options left for the Hawks, should they want to take them and should those players be willing to take the change-in-the-couch salary the Hawks have left to give.

One is Alex Tanguay. Yes, he’s old. Yes, he wasn’t very good last year. However, that was something of an anomaly for him. Tanguay is a career 18.6% shooter, which dipped to 11% last year. His possession metrics blow, though some of that can be chalked up to playing on the top lines for possession-allergic teams like the Avs and Flames of the past few years. What he is is a conscienceless shooter and that’s kind of what the Hawks need on the top line right now, if it’s a given that Schmaltz can be a playmaker to Toews’s battering ram (and that’s hardly a given, but that’s what we’ve got). Tanguay has played for Q before for one year in Denver, when he went for 29-49-78 in ’05-’06. He’s not going to do that again but we know how Q will bend heaven and Earth to protect guys that he’s coached before (hi there, Kris Versteeg!).

The other one you kind of have to dig through, and that’s Jiri Tlusty. Right off the bat you know this is a player that Q would hate, so maybe it’s not even worth talking about. Tlusty isn’t that far removed from 23 goals in 48 games during the Season-In-A-Can and 16 the following year. This is where we are. Tlusty is another who saw his shooting-percentage fall off a cliff last year in an injury-shortened season in New Jersey. His possession metrics also aren’t anything to write home about. However, in his one season under Bill Peters, who plays a system very similar to the one Quenneville employs, he was actually a possession beast at 55.3 CF%. He was just as good in his brief stint in Winnipeg after a trade, also under Paul Maurice who gets it somewhat. You could make the argument that when deployed into a high-tempo, possession-based system he can flourish, or flourish as much as Jiri Tlusty can. Given where the Hawks are, they have to dig deeper and try some throw-it-to-the-wall shit.

Or they can enter the season with unproven kids and bum-ass veterans everywhere they don’t have a member of “the core.” And that could work if Schmaltz proves worthy of the pedigree and Hartman, Hinostroza, Working Class Kero and whatever other mishmash of kids show far more than they ever have at this level in brief glimpses. Or can at least tread water to the deadline when hopefully Bowman can trick some more GMs into thinking the gloss from the logo makes these players better than they are and can get something for them.

But yeah, this isn’t where you’d choose to be if you could. 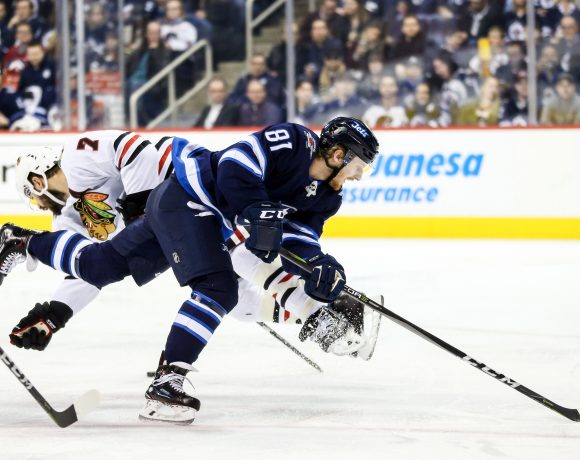 Making Sense Of Nothing, In Defense Of Something