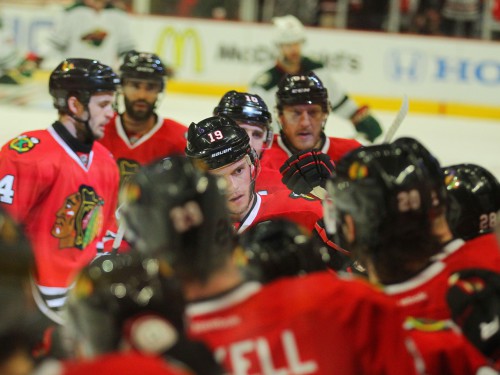 The Wild were never going to let it be pretty. While they’ve varied their approach in the first four games, from period to period even, a pivotal Game 5 on the road saw them fall back into the trap that gave the Hawks headaches in Game 3. But after a jittery opening 5-10 minutes, the Hawks started to come to grips with what they saw. And despite conceding the opener as a direct result of a pick play that Stockton and Malone would have been proud of that opened up space for Terror From Hell Erik Haula, the Hawks began to get a tighter and tighter grip on this one.

It was far from perfect. While the Hawks support was better, they were more willing to try the middle of the ice to get out of the zone, to chip and chase, the execution was off. Every time Oduya tried to field a pass or puck along the boards, my eyeballs rolled back in my head. Keith was trying far too much dip-trip-rip-fantasia behind his goal line and at Minny’s blue line. Nick Leddy looks terrified to make a mistake (wonder why that may be). Because what the Hawks have to do when a team pinches down on them along the boards in their zone has to be so precise, when it doesn’t work it can get urpy.

But they slowly got better, got their goal to tie it, worked to get their second and then squeezed the rest out. They had to get through some chances but it didn’t feel like Crawford had to drink the blood of virgins to get through the final 10 minutes.

All that adds up to a series lead.

-It’s not like we don’t have years of evidence of this (pardon the double negative), but the Hawks are simply a different team when they roll four lines. Only Nordstrom didn’t crack 10 minutes tonight. And while it doesn’t seem like a bonus three to four minutes of ice time for the fourth line should make that much difference, it clearly does. Because eventually the Hawks are going to expose something on the bottom of the other roster. Regin causing a penalty that the Hawks cashed in on would seem to be evidence of that.

-The obvious story from our end is Peter Regin slotting in and borderline transforming the bottom six. What’s going to annoy the piss out of me as how this will be characterized as yet another ingenious Q adjustment in the playoffs, when the Hawks should have had this 10 games ago.

Regin is no miracle worker. He’s probably just above “a guy.” But what he does have is wheels and a brain, and if given the right shifts and opposition, he can at least do enough to make things happen here and there. This was no mystery to anyone who watched the last two-three weeks of the season. Shame Q wasn’t watching.

-It’s strange. As yippy as Oduya and Hjalmarsson seemed at times they’re still your possession leaders tonight, and that was mostly against Granlund and Parise. Taking those two out of it really blunts the Minnesota attack. The difference between that matchup here and in Minnesota is that Ebenholts ein Elfenben were joined by Toews, Hossa, and Sharp for most shifts instead of either the third or fourth line.

-I have made my complaints about Michal Handzus loud and clear, but his getting inside position on Koivu in the last minute scramble is why he’s in the lineup. Zus will always defer to the defensive position, and he generally knows where to be even if he can’t always get there. I may not like it, but it’s not like I don’t get it.

-I am officially tired of Erik Haula. So it’s fucking wonderful that he’ll only be terrorizing us for at least the next five years. The Hawks still can’t seem to find an answer for the Wild’s third line, especially its mobility, which is exactly what the Hawks used to do to other teams back when they tried to play a 3rd and 4th line.

-In that theme, Brookbank replaced Rozsival tonight because Rozie had been so inhaled by that line in Game 4. He dealt with it slightly better I guess, but as long as Leddy has the yips it’s going to be an adventure. But then, Leddy had the yips for the first part of the St. Louis series and recovered. I’m hoping for the same now.

-Regin’s greatest miracle was turning Versteeg into a competent player. I don’t think we can stress how amazing that is.

-The winning goal stemmed from a pretty nifty move from Hossa in the corner to get loose, get the puck to Sharp who got the puck to the net which allowed Toews to turn Granlund into regurgitated potatoes in a battle in front. Of all the things Hossa can do you sometimes forget he can squirt away from people in tight.

-It’s always the default position to take when a prominent player isn’t producing that he’s hurt. So it’s been with Sharp. I hadn’t really bought it until tonight. He doesn’t seem to have a burst. Hossa and him had a rush and normally Sharp would explode around the d-man for a clear shot. He didn’t have it. He appears reluctant to sprint. Some have speculated it’s a wrist problem because he hasn’t snapped off a real shot, but he just hasn’t given himself a lane to do so. We’ll watch more. Could be out of gas after a long season and Olympics.

-I should know this script by now. The longer a series goes the more of a feel the Hawks get for what is required and the more they slowly just shore up the cracks. They’re like a jet meant to break the sound barrier. At lower speeds it leaks and creaks. Once it hits the barrier everything seals up and they hum.

I was wrong to despair. The Hawks hold the axe now. They’re 11-2 in the Q Era when they do. The Wild aren’t going to be an easy kill. But the Hawks have taken down bigger. 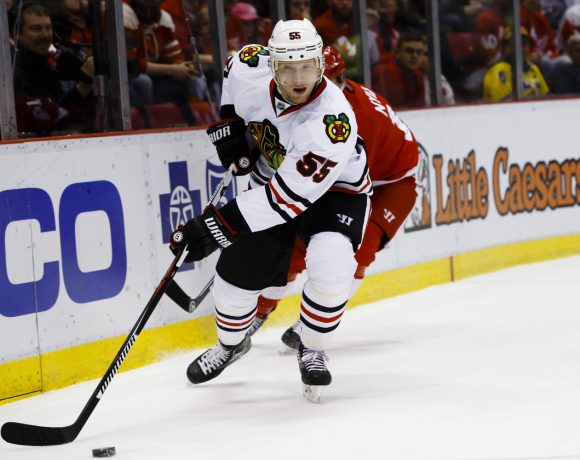 Fall On Your Sword, Ajax

Tie a Rope to the Back of the Bus – Hawks at Canes Preview, Vape Depot Grand Opening