Fine, I'll Do Your Job For You 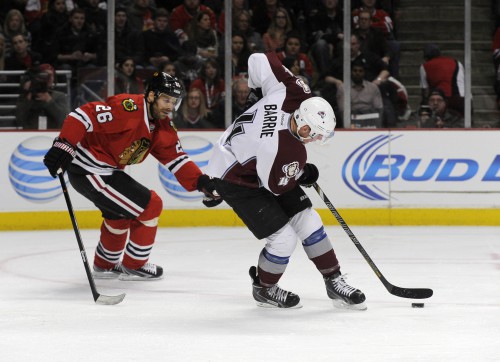 While everyone associated with the Hawks was in a tizzy over Jonathan Toews’s injury and mourning the end of this season figuratively, another somewhat important story slipped through the cracks.

We all noticed, and so did the NBCSN broadcast (you think the CSN one would have?), that on Sunday night Michal Handzus basically didn’t play the second half of the game. He was on the bench, but we didn’t know if he was hurt or simply benched.

We now know that he was benched, though we had to pry that out.

It’s not groundbreaking stuff, but it’s at least curious that in a game where the Hawks were down a center, Q voluntarily decided to strip himself of another. It’s no secret that Handzus has been worse than usual lately. He hasn’t even been useful in what is supposed to be his strength, along the wall and being strong on the puck. I can’t even list all the names of centers much smaller than him who have stripped him repeatedly, and Patrick Sharp didn’t even wait around to be frustrated by his plodding ways like Kane did and just started doing everything himself.

Handzus is supposed to be Q’s blanky, and in some ways he is only on the penalty kill (which some teams have exposed by moving the puck and themselves pretty quickly around the perimeter and opening up lanes). But for even Q to realize that Zus has been a detriment at even-strength is kind of a surprise. He’s always had a myopia when it comes to the Slovakian Snuffleupagus.

I’m not sure where it leaves the Hawks going forward. Sure, it’ll be a message to Handzus but what he can do about it at his age and after another long season wouldn’t add up to much. I would rather it didn’t lead to a forcing of Tivo Targaryen into the lineup more than he’s ready for (he hasn’t looked overmatched all the time, but he hasn’t not all the time either). We know Q is loathe to move Kruger from between Bollig and Smith/Regin. So basically that doughnut formation just got a little larger.

More Ben Smith at center? Shaw playing on what would loosely be considered the top six? Heaven forbid Sharp taking time there? Joakim Nordstrom was called up today, is he going to force Kruger higher? And if Q doesn’t trust Zus at even-strength that much any longer, is his time on the PK under threat as well? Would you really lose anything if Sharp started killing penalties instead of him? He’s only done it the past six years or whatever. Especially when the 1st round is going to be spent against a lightning quick squad in Colorado, Duchene or no Duchene.

-The latest twist in this Handzus mess got me thinking about his re-signing and the whole construction of this roster. While at times we’ve pinned the Hawks’ stumbling patterns since basically the last half of January (with occasional spasms of dominance) somewhat on fatigue, I kind of threw that out the window when the Bruins ripped off 12 in a row.

A caveat here. The B’s weren’t all that impressive in the fall and early winter when the Hawks were basically Showtime. So maybe this is just an evening out of the wavelengths and it all equals out in the end. I don’t know that I fully buy that, but it could be.

A common refrain is “they’ve played so much hockey in the past 15 months.” Yeah, well so have the Bruins, who have played the exact same amount. Ok, they had five less Olympians, and only Tuukka Rask, Patrice Bergeron, and Loui Eriksson going the route in Sochi. Whereas Keith, Toews, Sharp, Hjalmarsson, Kruger, Oduya, and Kane did for the Hawks. But no Olympian would have played less than four games and no more than six really. Am I really supposed to believe just a handful of games is the difference here?

If this is something more than just a boredom malaise, I think we can attribute it to the holes in last year’s roster not being covered up by luck or career years in performance this term. When Stan looked at his team this year, he basically elected to get the band back together. You can understand the thinking, if not agree,  for that because A) the team obviously rolled through the league last year, B) it was his policy on the team that finished the ’11-’12 season and that came up 7’s, and C) he’s probably still a little scarred on what happened to the ’10 champs.

But that sort of attitude counted on everyone playing at the same level they did last year which was never going to happen, and no one else getting all that much better. Well, the Sharks, Blues, Ducks and Avalanche all got better and significantly so. Sure, no one saw the Avs coming but you have to count on one surprise package somewhere, don’t you?

Counter that with Peter Chiarelli in Boston. He would have been pretty justified in bringing back his team as a whole this year. After all, they were basically a few inches away from sweeping the Hawks in the Final. Granted, Chiarelli had more cap concerns than the Hawks did, and some moves were required.

Instead, he launched Tyler Seguin and Rich Peverley for Reilly Smith and Loui Eriksson (and shockingly, Eriksson has not been the bigger contributor out of that). He let Nathan Horton walk and brought in Jarome Iginla, who didn’t exactly look fresh-legged last year in Pittsburgh. He let his kids on the blue line get acclimated and had a coach who was willing to deal with the bumps, as well as Carl Soderberg on the 3rd line. Would Morin be giving you anything like that if he were handled patiently?

It’s two different approaches. I know which one I would have rather seen. And yet it could all still work out. Just doesn’t look that way at the moment, and how many chances do you really get?