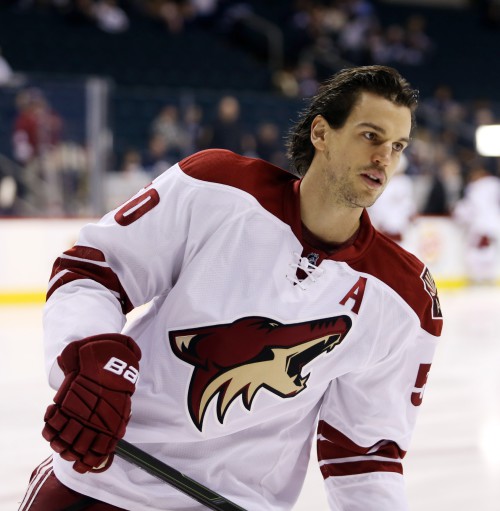 Honestly, that might be the best headline I’ve ever written.

Anyway, I could have saved this for tomorrow but I’ll be too depressed after City put five past Liverpool so let’s get this done now. The Blackhawks acquired the biggest center on the rental market tonight, Antoine Vermette, for Klas Dahlbeck and 2015’s 1st round pick.

Ok, the main complaint first, the price. Yeah, it’s steep on the surface. But when you dig deeper, it’s not so much. A 1st rounder is a 1st rounder yes, but the Hawks will get a 1st or high 2nd (essentially the same thing their first round pick will be) back when they have to dump someone like Sharp or Bickell in the summer because of cap problems. Fuck, they got a 1st for Troy Brouwer. If Bickell comes up with another big playoff performance, he can fetch a 2nd.

As for Dahlbeck, I liked him but this is where the Hawks have depth. Let’s face it, Keith-Seabrook-Hjalmarsson are entrenched here for years. That leaves only three spots. Johns, Van Riemsdyk. Paliotta, Pokka, and others probably rate higher than Dahlbeck. And if you think about how the Hawks have always constructed their pairings, or at least try to, as one puck mover and one centerfielder, Hammer and Seabrook take up two of the three centerfield spots. And TVR looks a better bet for it.

Now, to Vermette. It would be better if it were 2012, but he’s only 32 so he’s certainly not over the hill. Let’s put it this way, Vermette has more goals and points than Brad Richards, even though he’s been taking on the toughest lines for the Yotes and hasn’t played with Patrick Kane for three months. Clearly this is an upgrade at the center positions, and keeps Andrew Shaw on a wing which is an upgrade there.

Vermette can do everything. He can kill penalties, he can take the second checking assignments if the Hawks want to release Toews from the duty. And a Toews that doesn’t have to take on tough competition is a Toews that’s going to tear a hole in time. Vermette’s great at the dot, though that’s not as important as you might think. He can be Annette Frontpresence on the power play. His hockey IQ is at the highest end. He’s a player made for Quenneville.

Yes, it means Teuvo won’t play center again this season, at least with the Hawks. But he might get a shot at wing. Even if he’s not here, and even without Kane it can look something like this:

Ok, now have Teuvo on Vermette’s wing, slot Versteeg and Shaw down, take out Nordstrom. Looks pretty good, eh? Now bring Kane back, however you want to do it. It’s a team that no one is looking forward to playing, at least.

This Hawks team needed help, it got it. While there’s been so much bullshit flying around it the past week, these two moves are a signal from the front office to the players that they still think they’re capable of big things if they just get their shit together. You better believe they’ll be paying attention to which players respond and which don’t and use that to determine who gets to stay.

The Hawks are all in. So should you.