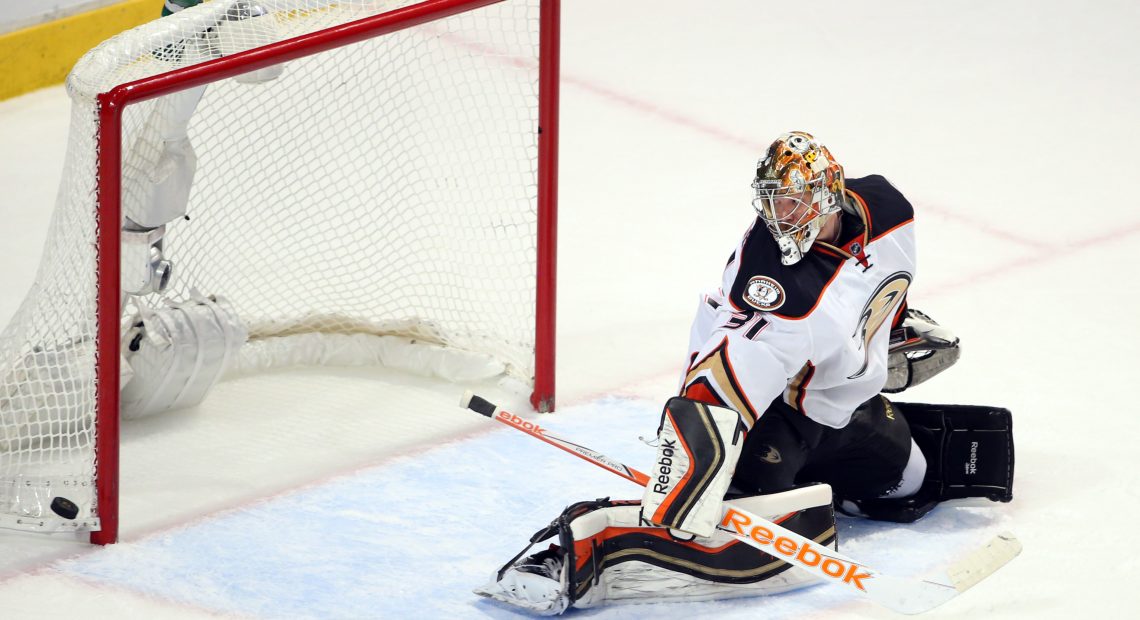 Let’s take a trip in the way back machine to June 17, 2013. It was Game 3 of the Stanley Cup Final between the Boston Bruins and Chicago Blackhawks or as it’s better known, the day Jonathan Toews centered the 4th line. The Hawks had 28 shots on goal in a 2-0 loss that gave the Bruins a 2-1 series lead.  Marian Hossa was a late scratch and the Hawks revealed prior to the game it was due to a upper body injury.

I mention this game because it marks the last time Joel Quenneville made roster decisions that defy any resemblance of logic.

Which takes us to today. With the Hawks and Ducks tied in the series at one game apiece and the Hawks looking to defend home ice, the decision was made to replace Teuvo Terravainen and Antoine Vermette with Kris Versteeg and Joakim Nordstrom. After the game, Quenneville said it was for fresh legs. So take that to mean…whatever.

The Hawks self-neutered their two best lines from Anaheim and barring any injuries the public is not privy to, I cannot figure out the reasons for the life of me.

Allow me to talk things out in hopes that it may help us out.

Scratching Teuvo to get Versteeg in. I don’t agree with it but I sort of see why a case could be made. Versteeg has been out awhile and probably looked good during optional skates and what not. The Hawks were coming off a triple overtime game. So if your one that likes to play hunches or longshots, you could envision catching lightning in a bottle.

Again, I don’t agree and I think it’s a classic example of overthinking on an obvious situation but I can see why the thought may pop into Joel Quenneville’s head. Bryan Bickell may have been a better candidate but the series has been physical he probably didn’t want to make his team smaller than it is.

Scratching Vermette for Nordstrom….that’s a little tougher. Vermette doesn’t seem to be getting any air on his shots these days so maybe there’s some kind of shoulder injury we don’t know about. Even if he does have an injury, it hasn’t hindered his face-offs. And if Marcus Kruger is injured enough that he can’t take face-offs anymore, scratching guys who can take a face-off for players that can’t doesn’t make much sense.

Those two moves weren’t the reason the Hawks lost but it’s hard not to see past them. Especially with how it affected the rest of the lineup. And again, it completely tore apart the two best lines for the Hawks in Game 2.

It’s a bizarre move for sure. Perhaps the most bizarre of the Joel Quenneville era to the point that it’s almost a parody. I’m completely flabbergasted to the point that I’m one step away from being an old cartoon character that flaps his lips with fingers.

–And with all that, the Hawks still had the puck on the stick of their best offensive player in the slot with 5 seconds left and a chance to send the game to overtime. Hockey, everyone.

–Like I said above and Sam has mentioned multiple times, Marcus Kruger did not take one face-off tonight which is very out of character. He took a few monstrous hits in Game 2 and I seem to recall Desjardins taking draws during the overtimes but I was also delusional. He also saw the least amount of ice time than any other forward not named Joakim Nordstrom. Even in the third period, when you expected the lines set to blend and the bench shortened to 10 forwards, there was never even a hint of moving Shaw back to Kruger’s wing.

If he’s hurt to the point that he can’t take face-offs, then that’s a problem. Especially if the Hawks keep dressing guys that can’t take them in favor of ones that can.

And maybe it is Kruger’s injury that forced all these changes to the lineup but still, it’s hard to see the Hawks logic for that.

–The official scorer said the Hawks only had one shot during their five power plays. If I was a real masochist, I’d go back and re-watch the game because I don’t seem to recall it being that putrid.

The Hawks were predictable in their passing and movement but they were getting zone time and they did generate opportunities. So perhaps it’s just a matter of getting the puck through the right shooting lane which is really a matter of accuracy and puck luck more than anything else.

–I hesitate to say Frederik Andersen is in the Hawks head because that is just a stupid thing that dumb people like to believe. But they sure seem to be lacking confidence when they’re shooting on him. Kane, in particular, passed upon another shot 25 feet away from goal which is the second time he’s done that this series. Toews had a breakaway from 10 feet in. Each chose to try and deke him.

Maybe they’re not seeing shooting holes and are uncomfortable when they’re bearing down on him. It’s hard to say, really, because Silicon Valley still hasn’t mastered that technology where we can take over other people’s brains and eyes.

(What I mean by shooting holes is that goal scorers see, what can best described, as holes when they’re getting ready to shoot on a goalie. It can be as wide as a canyon or it can be a few inches big but professional hockey players will find them. The best thing to compare it to would be like when a basketball player sees the hoop as really large or small depending on his feel.)

Of course, all of this can be rendered moot if the Hawks pop in a few quick goals on Saturday.

–All right, it was a weird night but all it changed was that Hawks have to win one more game in Anaheim if they want to win the West. It won’t be easy but no one said it would be.