This was the wrap I didn’t want to write but kind of suspected I would. There was this feeling that the Hawks just wouldn’t be up for this one and that the Nucks might because it was at home and dick-measuring contests are always their thing. So I’m going to do what I think Fifth Feather would do and point to history.

March 2009, the Hawks and Canucks engage in what at the time was a very important game. At the time, it felt like they were grappling for the 4th seed (the Flames would go on to collapse and surrender the division to Vancouver and drop to 5th). And the Canucks walked all over the Hawks at the UC that night, and was famous for Burrows’s hair-pulling antics. The whole thing that year ended with a Patrick Kane hat trick and Luongo in tears.

I think it was February 2010, and was our first ever official roadwatch at Whirlaway. The Canucks put up 7 on the Hawks that night. That May ended with Byfuglien laughing at the entire Rogers Arena crowd. In fact, it was GM Place then.

What I’m trying to say is, tonight doesn’t matter. It was never going to. When even Q comes out and says throw this one in the trash and every player says we just weren’t there, you have your answer. Everything that matters is clinched, three games in four nights in the last week. The Hawks look to be as desperate to start the playoffs as we are to watch them do it. It was a bad night. I know it comes against the team we loathe most and it touches a nerve that you can’t ignore, but it’s meaning is nil.

But we need bullets, right?

-While some use sports to affirm their manhood, at some level I get the worry about the Hawks will respond to a true physical challenge. We don’t know any more than we did on Sunday. In the playoffs, opponents will target Oduya, Hjalmarsson, and Leddy. That’s what the Coyotes did. We won’t have answers until May.

-If anything though, this should prove that Bollig and Carcillo do nothing to stem that tide. Because they can’t get there to do so.

-Canucks fans feelings to Duncan Keith is bordering on a farce. Somehow his desperation slash on Sedin on his breakaway is now just as bad as his shiver to him last year (which I’m not defending, but how much worse was it than Sedin’s blindside elbow to his dome that preceded it?) Because no d-man has ever tried to desperately affect a breakaway before.

Now there’s this about how he’s a sexist. Look, I love Harrison Mooney, and I’m sure he knows that. But we here in Chicago know that Keith has a tendency to snap at a reporter when he’s frustrated, whatever sex they are. Yes, the quotes if viewed through the right prism can be viewed as sexist. But “you never played the game” has been thrown at myriad reporters in every sport. And the question definitely sounds like digging. Even in a win, the Canuck fan-paranoia is beyond belief.

-So Crawford played well but gave up three goals and lost. I can’t figure out what this means, because I don’t speak Bullshit Goalie Controversy.

-So Bolland’s hurt again? That should assure we get a viewing of Drew The White on Wednesday.

-Couldn’t help but notice that Eddie didn’t miss the chance to light up Stalberg. And yet Stals was one of the few forwards who looked like he cared and kept attacking. Maybe one day Olczyk can share with us what he hates so much about him. i’m going to guess Stals went home with a girl that Eddie was hitting on once.

-Funny, my brother and I were just having the discussion about whether Leddy could make the US team next winter. I think he could definitely get in the discussion. But just off the top of my head, Ryan Suter, Jack Johnson, Keith Yandle, Paul Martin, and Kevin Shattenkirk would fall under the puck-moving d-man label, and the US is going to be more in the market for atom-smashers.

-I’ve seen this movie from Vancouver before. If these two tango in the Conference Final, I’m reasonably sure it involves the Canucks leaving position and sanity to try and prove just how tough they are. I know how it ends, too.

Let them eat cake. I’ve got bigger things to worry about, starting next week. 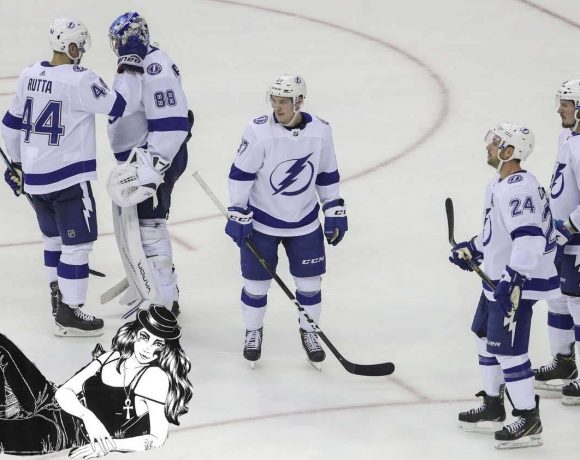 From Your First Cigarette To Your Last Dyin' Day: Hawks at Jets Preview/Pregame Thread/Pit Fight