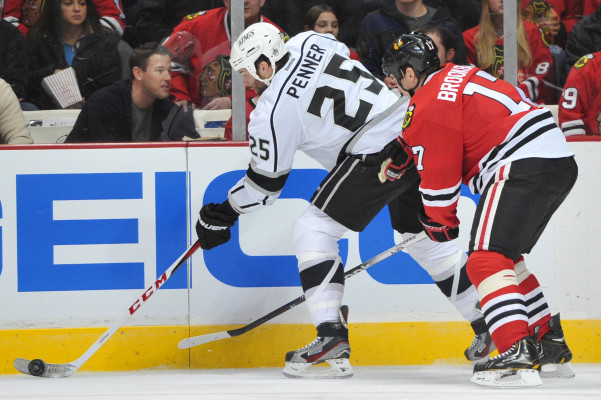 Quick note for those somewhat new here. Behind The Net Rating is the difference in the team’s goals-for and goals-against for every 60 minutes the player in on the ice versus every 60 he’s off.  Corsi Relative is the player’s Corsi number relative to the team’s overall rate.

What We Liked: When talking about your 6-7 d-man, it’s not so much what you liked as what you didn’t hate.  And for the most part, Brookbank didn’t provide much to hate. In a lot of ways and for a lot of the season he was more effective than Rozsvial, though he didn’t play as regularly and was perhaps as screwed as anyone by the insistence on eight defensemen for reasons we’ve yet to hear. Brookbank was solid enough. He wasn’t fast but didn’t get chased down as much as he did the year before. His work with the puck, especially in the playoffs, was far more assured. His play during Seabrook’s suspension in the first round was a real surprise when we were hiding behind the couch. Didn’t do anything spectacular or even great, but considering what he is I didn’t think there was anything that bad.

What We Didn’t Like: There are always yippy moments with Brookbank or anyone of his ilk. He started the season well but had a dip somewhere between the halfway point and the three-quarters mark of the season. Obviously not the best skater, and could get turnover happy when pressured. Doesn’t provide anything on the offensive end, but he’s not supposed to. And I think whatever fights he got into he got his lunch handed to him. But that doesn’t matter. Bollig did the same thing and he’s apparently a Roman gladiator.

What Is It, You Would Say, You Do Here: Nothing anymore. Brookbank is a free agent, and with Stephen Johns coming through and David Rundblad needing time simply to justify the price given up for him, there doesn’t appear to be any room for Brookbank. Rozsival also has another year on his deal so he’s not going anywhere barring a trade or retirement. We know Q prefers Rozsival over Brookbank (didn’t start that way, strangely), so he’ll take his work elsewhere. Brookbank was an honest enough player for a #6-7 blue-liner, the middle relief of hockey. He caused more angst among some fans than he should have. Did a job. Thank him for it. Move on.