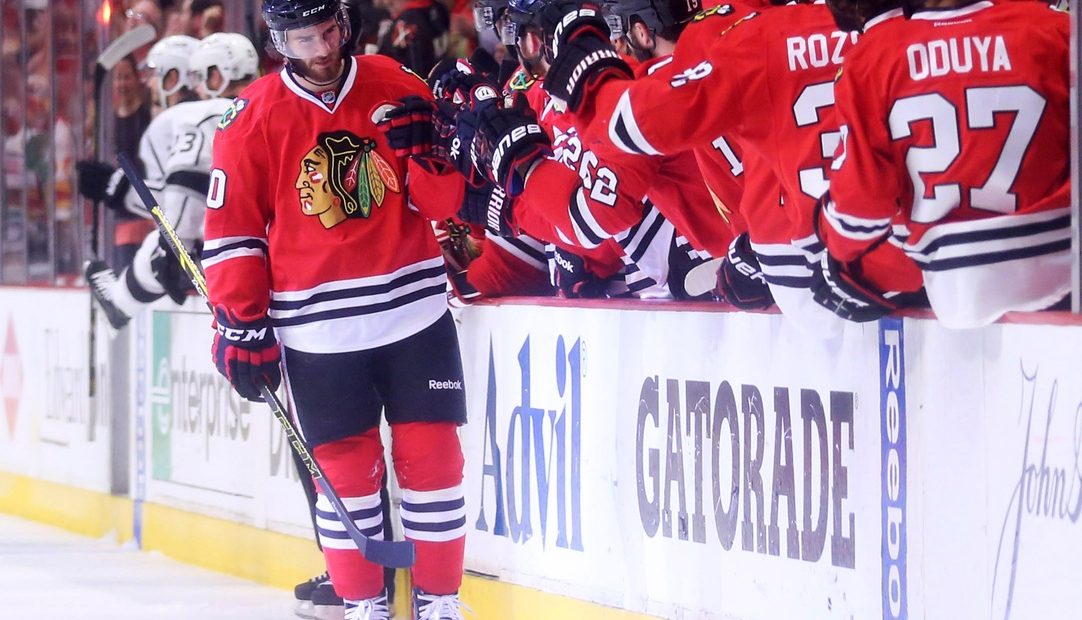 In an attempt to return to some kind of normalcy, this series resumes fittingly with the apple of The Ombudsman’s eye, and the number-sake of his in-print avatar (Al Secord) in Brandon Saad.

What We Liked: Basically everything. Saad took his next developmental step after his Calder finalist rookie season in the lockout year. Saad improved in every important statistical category, including points per game, shooting percentage, and 5on5 Corsi share. And all of those numbers went demonstrably up during the postseason, where Saad wasn’t ineffective during the spring and summer of 2013, but was certainly not the contributor he was for 19 games this spring.

To that last end, a quick glance at the Hawks’ individual stats with or without Saad shows that literally every teammate he played with for more than 100 minutes held a worse Corsi share without Saad than with him. For a player that isn’t a playmaker or passer by trade, that is an incredible testament to just how powerful Saad’s legs are in transition and hands are along the wall in the offensive zone. Notice the 64.6 share that Saad and Toews held together and fathom how many solar systems that a line of Toews, Kane, and Saad could destroy with nary a scuff across any of their visors. Saad will only be turning 22 in October, and it can be argued that he hasn’t even fully figured it out yet.

What We Didn’t Like: While Saad does drive possession and opportunities for the Hawk offense and therefore minimize time spent on defense, his defensive positioning could use a little refinement. Doing so could increase his PK time from the 55 total minutes he played down a man this year to help keep some of the tread on Marian Hossa’s tires. And his late season concussion and subsequent “healthy” scratch are always concerns given that one brain injury usually makes it more likely another one will occur. But these are all minor gripes surrounding what looks to be the most complete power forward the Hawks have produced out of their own system in generations.

What Is It, You Would Say, You Do Here: Here’s where the fun begins. The upcoming 2014-2015 season will be Saad’s last on his entry level contract, carrying a pittance of a cap hit at $764K. Obviously Saad is going to be due a significant raise as the Hawks look to keep him around for a very long time, particularly as Marian Hossa’s career winds down, even if his contract never will. The question then becomes what is fair value and term for a 23-year-old to be. Because Saad’s birthday falls in October, he cannot hit unrestricted free-agency until the following summer of 2020. Saad’s camp may try to lobby for a longer term deal with a lower hit to hold off renewed negotiations while still under Hawk control and not have to give up any years into unrestricted free agency. This might end up being an overpayment short-term for the Hawks, but could save them money over a short-term bridge deal now and another round of restricted free agency when Saad is 24 going on 25. But at that time they can buy into a couple years of his unrestricted status, which are generally thought of as a forward’s prime years 26-31. It’s something that will undoubtedly get worked out before any other team even gets to sniff around with an offer sheet, and anyone mulling over a #20 sweater purchase can do so with confidence.